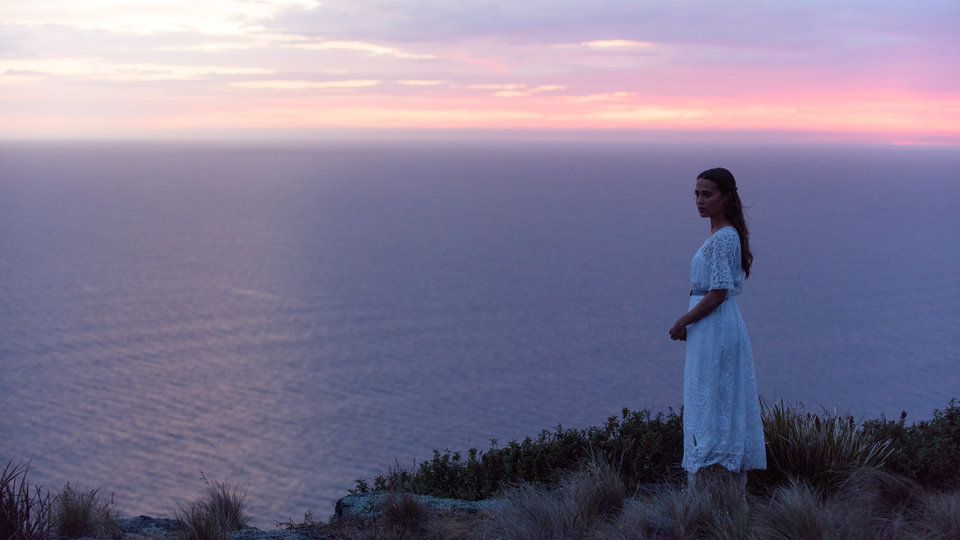 After the gritty and emotionally raw double bill of Blue Valentine and The Place Beyond the Pines, Derek Cianfrance allows a few softer edges to enter the frame, in this sweeping and romantic drama. Michael Fassbender plays Tom Sherbourne, a traumatised survivor of the Great War. Scarred by his experiences, he seeks isolation from the world, and takes up a post as a lighthouse keeper on Janus Rock, a remote island off the coast of Western Australia.

On the mainland he meets Isabel (Alicia Vikander) a young girl sensing escape of her own, and the two fall for each other, sending love letters across the sea until they are eventually married. She moves to the island, and all is well. The honeymoon period for this beautiful couple is gorgeously shot by cinematographer Adam Arkapaw. The pastel skies, the blue ocean, the slow dissolves, and the stirring strings of Alexandre Desplat’s moving score, all come together to give the film a romantic streak a mile wide.

Tom and Isabel long to raise a family, but Mother Nature is seemingly not on their side. After two very traumatic scenes of miscarriage, fate intervenes, and a decision is made that will change their lives forever.

When a small boat is spotted crashing in the waves, Tom and Isabel run into the sea to rescue it, and find it occupied by a dead man, and a baby. Isabel, still grieving her recent loss, and driven by her urgent and powerful desire to be a mother, immediately falls in love, and convinces Tom that they keep the child. Tom goes along with this, but is far more conflicted than Isabel.

Fassbender and Vikander are tremendous in these scenes, tapping into primal emotions. Isabel is finally a mother, and nothing is going to take that from her. There’s a beautiful and harrowing moment, where Tom, conspiring to cover their tracks has to remove the grave marker for his most recent still born child. It’s identity taken by the child they themselves have stolen.

Tom soon discovers the identity of the baby’s real mother (Rachel Weisz), which only adds to his torment. Weisz has very little screen time, and her role is vastly underwritten, but she is a class act, finding depths in the character that were perhaps not there in the writing.

Cianfrance’s pacing of the story, as it was with The Place Beyond the Pines, is the biggest problem with the film. It all grinds to a halt in the lethargic third act, which seems to go on interminably. It’s never a good sign when you start looking at your watch, and it’s an even worse sign when the characters you’ve spent 90 minutes with suddenly start behaving like different people. There are some very contrived character beats in the final third, that completely undermine what you’ve already seen, and serve only to remind you that you are watching a piece of fiction.

It’s a shame, because whilst this was never going to be a big awards contender, it could have been a terrific old-fashioned weepy.