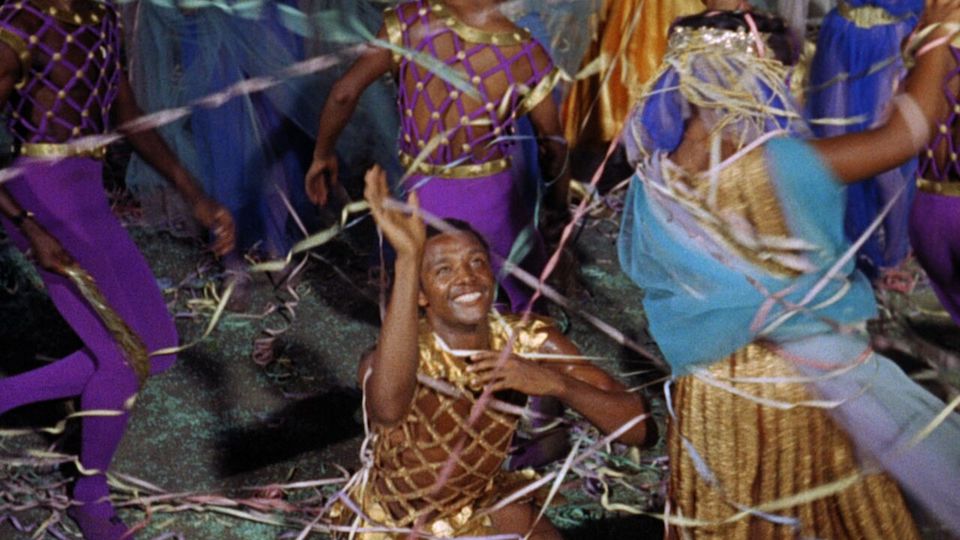 Marcel Camus’ Palme D’Or and Academy Award winning Black Orpheus comes to blu-ray this week, thanks to a sumptuous restoration from the good folk at Criterion. This retelling of the Greek myth of Orpheus and Eurydice is a whirling explosion of colour, vibrancy, and swiveling hips, with almost every scene of the film bouncing to the rhythm of the bossa nova beats.

Camus cleverly transposes the story into the favelas of Rio de Janeiro during the famous carnival. Eurydice (Marpessa Dawn) has run away to Rio to escape a man she believes is trying to kill her. He is portrayed in the film as “Death” himself – a looming figure in a carnival skull mask. Eurydice stays with her cousin Serafina (Lea Garcia), who along with Orpheu (Breno Mello) and his beautiful and demanding fiancée Mira (Lourdes de Oliveira), is a performer in the carnival. Orpheu is a trolley driver, but true to the myth is also a musician and poet. His songs charm and seduce all those who hear them. He and Eurydice fall in love, but the looming spectre of Death, and the violent threat of the scorned Mira drives them apart.

If you are familiar with the ancient myth, then you will no doubt know where all this is going, and it ain’t good. There’s a reason these stories were called Greek tragedies. However, even in the darkness of the underworld, there is a real exuberance to the film. Camus’s simple framing of the action focuses on the kinetic performances of the actors, whilst the non-stop samba music captures the joy and pulse and undeniable malevolence of the carnival.

For viewers who have only seen Rio on film through the hyper violent prism of crime thrillers such as City of God and Elite Squad, then Black Orpheus is unlikely to appeal. A story of dirt poor romantics, who just want to dance and love and sing, based on a tale thousands of years old, I fear will not have the same draw as the dealers and criminals portrayed in modern Brazilian cinema. But they would be missing out. Rio has a long history of being depicted on screen as either a playground for the rich and beautiful, or as being a war zone for the impoverished underclass. Using the classical story as a framework, Camus depicted something altogether different. A tangible picture of Rio’s black community, a world away from Copacabana beach, yet also a stirring fantasy melodrama of love, music, song and dance.