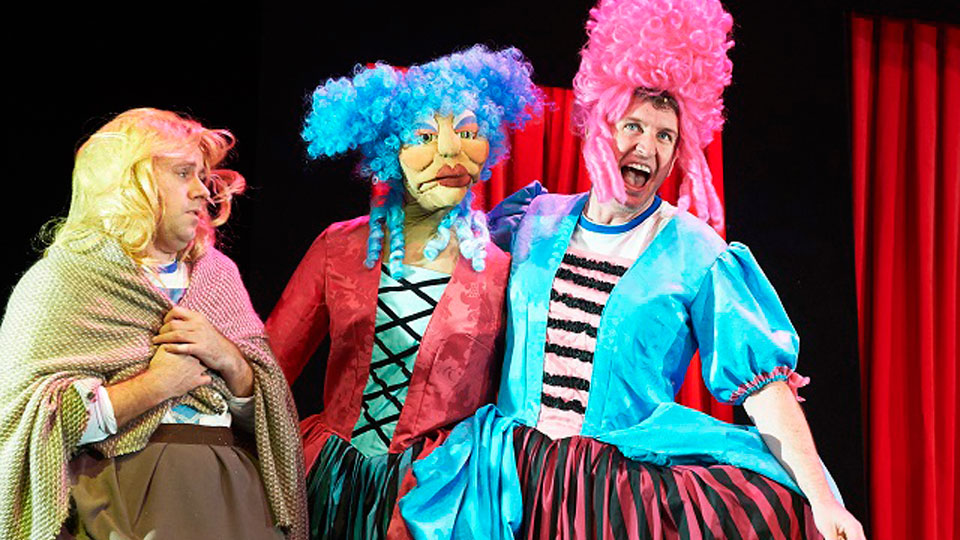 “I. can’t. breathe!” I wheezed, sitting in the Garrick Theatre, heaving with laughter and clutching my aching ribs. It was Sunday afternoon and I was watching Potted Panto with my family – a critically-acclaimed production featuring two blokes acting out abridged versions of classic children’s tales. Innovative and amusing, the show is a side-splitting whirlwind of riotous entertainment. I spent most of the first act bent over, overcome by giggles and battling to get enough air into my lungs to chuckle at the next joke.

The Olivier-nominated stage show has returned to the West End after a three year hiatus and whizzes through seven pantomimes in just 80 minutes. Dan and Jeff – the former CBBC TV presenters responsible for the hit, take the audience on a dizzyingly enjoyable journey through Jack and the Beanstalk, Dick Whittington, Sleeping Beauty, Snow White, Cinderella, Aladdin and A Christmas Carol. I haven’t cackled so loudly since I went to see The Play That Goes Wrong. And that made me howl.

The two men play almost every character, using quirky props and clever narration. They’re an energetic double act, sticking to the blueprint of pairing one serious character with a hapless sidekick – perfect for reinventing traditional fairy tales with a comedic edge. Directed and co-written by Richard Hurst, Potted Panto somehow squeezes in everything from singing and political satire to audience participation and chanting.

There’s an inspired 3D element, innovative twists and even a few racy jokes. The latter may not appeal to stricter parents, but my clan have no such qualms; three generations of my family were in the audience, with ages ranging from nine to over 60. We’re typically a tough crowd but Potted Panto had us all in stitches.

My eldest niece, aged 11, couldn’t wait to go to school to repeat some of the jokes to her friends. Her younger sister, aged nine, relished the slapstick humour and imaginative costumes. “That was so funny!” they chimed at the end. Other children in the audience were laughing and leaning forwards in their seats throughout, captivated and gripped with anticipation.

The wisest and harshest judges of any panto are the kids in attendance and thus I deferred to the experts – my nieces – to evaluate the show. “Give it four and a half out of five stars,” they instructed, because “the second part was not as funny as the first but it was still really good.” I concur. Post-interval, Potted Panto was slightly slower but my aching sides welcomed the respite.

An energetic, wickedly funny adventure from start to finish, you’d be a fool to miss Potted Panto this Christmas.