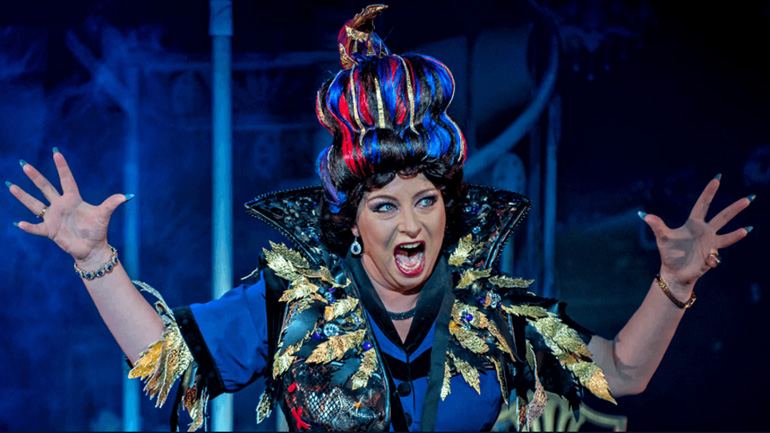 The Witches, Roald Dahl’s famous chiller for children, has been adapted for stage by Curve and Rose Theatre Kingston, in association with West Yorkshire Playhouse. It can be seen on the Courtyard stage until 21st January.

Faithfully reimagined by David Wood from the 1983 novel, The Witches tells the story of an orphaned boy as he and his Grandmother encounter a convention of witches at a seaside hotel. In Roald Dahl’s darkest tale, the witches seek to transform children into mice with the aim of ridding England of every child.

Like many of Dahl’s novels, his stories are underpinned by dark elements which verge on horror. Perhaps the creepiest aspect of The Witches is Dahl’s emphasis on monsters walking amongst society, disguised as ordinary people whilst taking every opportunity to poison children. It’s a modern take on the traditional fairy tale, tapping into the fear that people aren’t always as they seem.

Dahl’s novel is imaginatively brought to life under the direction of Nikolai Foster, utilising a boutique setting cluttered with many colourful artefacts. The play unfolds with an innovate playtime feel, much like a toybox being opened to reveal its own universe within. Presenting a stage of upscaled toys mixed with a charming underscore provides a rich and immersive theatrical experience.

A cast brimming full of energy and playfulness enrich the show with heart. Often playing instruments as strolling players, the story is told through song, narration and short, busy scenes. David Wood’s book is lean, combined with rapid direction from Foster, ensuring that the story is told swiftly, in short, sharp bursts. Runabout action punctuates the tale with plenty of imaginative slapstick, in addition to some perfectly pitched moments of tension.

The witches themselves are wonderfully realised through vivid costume design from Isla Shaw, adopting a punky, Day-Glo appearance when the women drop their disguises. Looking rather like Su Pollard, these witches are an agreeably lighter take on the taloned, bald predators as described in the opening scenes.

As the Grand High Witch, Sarah Ingram provides a bravura performance which is pitched perfectly between threatening and outrageously operatic. Fox Jackson Keen is charming as the boy at the centre of the piece, demonstrating a believable relationship with his heartwarming Grandma, played sympathetically by Jenna Augen. Jonny Weldon is boisterously brilliant as the pratfalling glutton Bruno, whilst an eclectic troop of witches extend the landscape with a host of charismatic personalities.

Dahl’s love of the grotesque is perfectly honoured in this production. The genuinely frightening transformation of children into mice is particularly well-realised with impressive effects, including a raised set which allows the cast to look down on the kids from some height. Innovate projections further evoke perspectives of scale, providing a cross-cut film effect in some scenes. A delightfully grim climax also showcases a very clever on-stage illusion, which is sure to have younger children watching through their fingers. Finally, in a brave move, the play maintains the original ending from the novel, which like all Dahl stories serves to make a distinct point about the nature of people and their relationships.

Creatively chilling, grotesque and macabre, The Witches is an enchanting, creepy delight. The show doesn’t shy away from the darkness of the novel, yet it concludes with warmth, optimism and levity. A superb, topsy-turvy adaptation which feels wholly authentic, The Witches is perfect children’s theatre which is chock-full of surprises for all ages.

Samuel Paynehttp://samuelpayne.weebly.com
Reviewer of Theatre in the North, including releases of classic film and television.
Previous article
The Commitments review
Next article
Potted Panto review