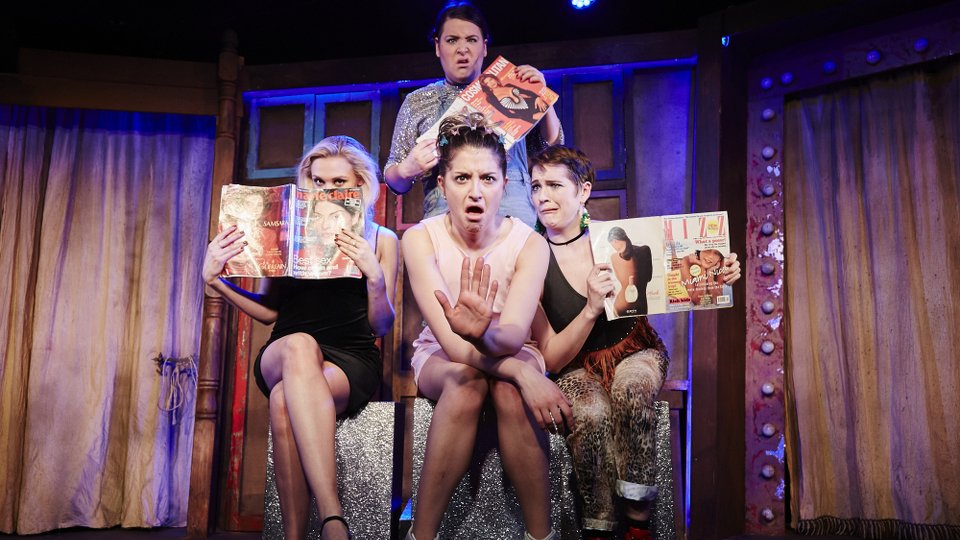 The ‘90s is having something of a resurgence. The fashion is well and truly back (although it may have peaked a few months ago with Kim Kardashian’s ill-advised decision to pair vintage popper Adidas tracksuit bottoms with stilettos…) and modern pop has a distinctly ‘90s flavour, so what better time than now for a trip down memory lane with throwback musical 2 Become 1?

The simple set-up starts with Jess alone and in tears, an emotional wreck following a recent break-up. Her three friends rally round to cheer her up with an alcohol-fuelled speed dating night, interspersed with musical interludes featuring some of the biggest pop hits of the 1990s. Not much else happens, but the ladies do manage to pack a lot into the 60 minute run-time.

All four cast members bring a huge amount of energy to the stage, working really hard to squeeze every last drop of humour out of the patchy script. But the manic gesticulation and gurning soon grates – every line is played to the rafters, ill-advised for a venue as intimate as the King’s Head Theatre. The actresses are not helped by completely one-dimensional characters – with stereotypes like the sex-mad seductress and over-bearing bunny boiler all correct and present. They all perform with admirable gusto, but with a weak script, it all comes off as a bit try-hard.

There are some nice musical choices – all ‘90s bases are covered from Britney to All Saints to the Spice Girls – but the backing tracks sound like they are from a bargain bin karaoke CD and feel flat. The quartet harmonises well though and there are a couple of stand-out vocal moments, especially from Kerrie Thomason, who showcases a gorgeous tone on a re-working of a Shania Twain classic. The production has also been given a festive twist, with a cover of Mariah Carey’s seminal Christmas hit.

The musical takes an odd turn towards the end, with an attempt on social commentary – surely we’ve covered the idea that we’re all slaves to tech and are losing the art of human touch by now? The intentions are good, but it’s another half-baked idea which feels shoe-horned in to give the production some weight.

The show does display sparks of originality, but they are sadly too few and far between. 2 Become 1 is a nice idea and could be a fun night out with your girlfriends, but overall, this is an opportunity missed.