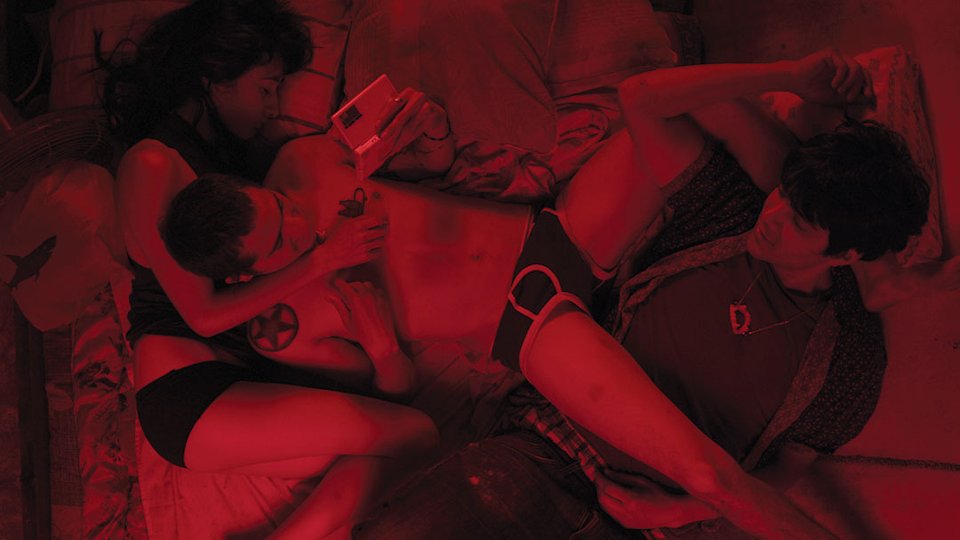 Skateboarders Miguel (Diego Calva Hernandez) and Johnny (Eduardo Eliseo Martinez) navigate the fine line between mixing business and pleasure in Julio Hernandez Cordon’s stylish new film. The friends and lovers earn money from finding blood donors for local gangs and their greed gets the better of them when they agree to supply 50 donors for a big payday. After accepting the deal, Miguel and Johnny find they are in way over their heads.

I Promise You Anarchy is the definition of a slow burn but sticking with it until the end may not provide the satisfaction you may be hoping for. The film is a product of style over substance that believes it has something more to say than it really does. The film positions itself as a love story and that’s perhaps the most interesting angle. Miguel and Johnny have a lust-powered relationship that is somewhat hampered by Johnny’s bisexuality and his ongoing relationship with Adri (Shvasti Calderon).

One of the problems that comes up time and time again is that nothing is really developed all that much over the course of the film. The love triangle never gets the focus you expect or hope for and the characters are disappointingly flat. Add to that the messy blood donor/gang plot and you’re left with a film that sorely lacks cohesion.

On the one hand I Promise You Anarchy seems to be commenting on the sexual fluidity of the modern teenage generation but it’s also highlighting issues of poverty and crime in Mexico. The two themes aren’t combined in a way that is satisfying and it leaves a muddled mess with not a lot going on to endure. The pace of the film is so slow and the lack of development quickly becomes frustrating.

It’s hard to pass much of a comment on the acting, as the actors aren’t really required to do very much. The dialogue is fairly sparse and the characters are so two-dimensional there’s nothing to relate to.

I Promise You Anarchy definitely doesn’t live up to its title and the only anarchy I could spot was one fighting against creating a satisfying and cohesive film. There’s an interesting idea at the heart of the film but it’s suffocated by the messy narrative piled on top of it.