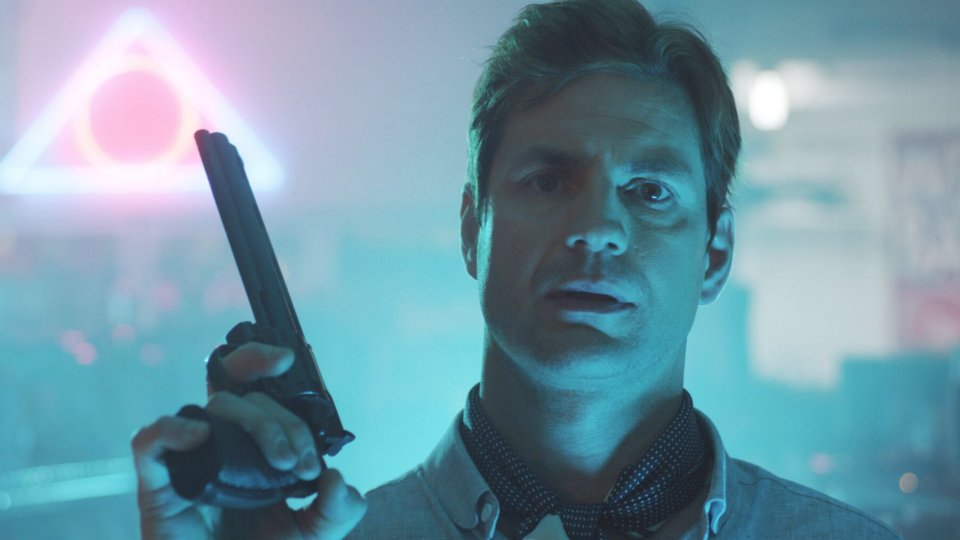 During a birthday party for his boyfriend Stephen (Gale Harold), Dusty (Van Hansis) becomes jealous when Stephen’s former flame Craigery (Matthew Ludwinski) shows up. The lovers get into an argument, which they take from the party and into a convenience store. During the row, Dusty blacks out and when he awakens in hospital, he’s the prime suspect in Stephen’s murder. Surrounded by friends, and under suspicion from the police, Dusty tries to piece together the events of that night to find out who really killed his boyfriend.

Kiss Me, Kill Me is the latest movie from director Casper Andreas and it features a screenplay by David Michael Barrett. The first thing I should tell you is that if you’re watching it for Gale Harold, then he’s barely in the movie past the opening minutes. Instead the film spends plenty of time with Van Hansis’ Dusty and the colourful group of people he surrounds himself with including best friend Amanda (Brianna Brown), psychiatrist Jeffrey (Craig Robert Young) and admirer Travis (Kit Williamson).

At its heart Kiss Me, Kill Me wants to be a film-noir style thriller but it never manages to pull it off. This is in part due to the predictable way that the film unfolds but mostly to the poor screenplay that doesn’t give any of the actors any material to sink their teeth into. What also doesn’t help is the widely varying acting abilities of the cast. The best of the bunch are Gale Harold, Brianna Brown and Kit Williamson, all of whom have a long and successful TV history under their belts. Sadly all three are drastically under-used and Brown is the most poorly serviced of the trio.

One of the problems with Kiss Me, Kill Me (aside from some of the acting from the leads), is that its tone is all over the place. It’s never dark enough to be the kind of film it wants to be but it’s not fun enough to be a comedy-drama either. The tone lands awkwardly in the middle and never really finds its rightful place. The final revelation is easy to spot (I’d say from the first half hour of the film) so when it does come around it’s less a surprise than a ‘oh that’s who did it’ moment.

Having been a fan of Casper Andreas’ previous films such as The Big Gay Musical and Going Down in LA-LA Land, I was really disappointed by Kiss Me, Kill Me. The film had the scope to be a campy thriller but it ends up being an underwhelming affair that long outstays its welcome. There’s a lot of promise here but sadly it’s poorly executed and misses its opportunity.