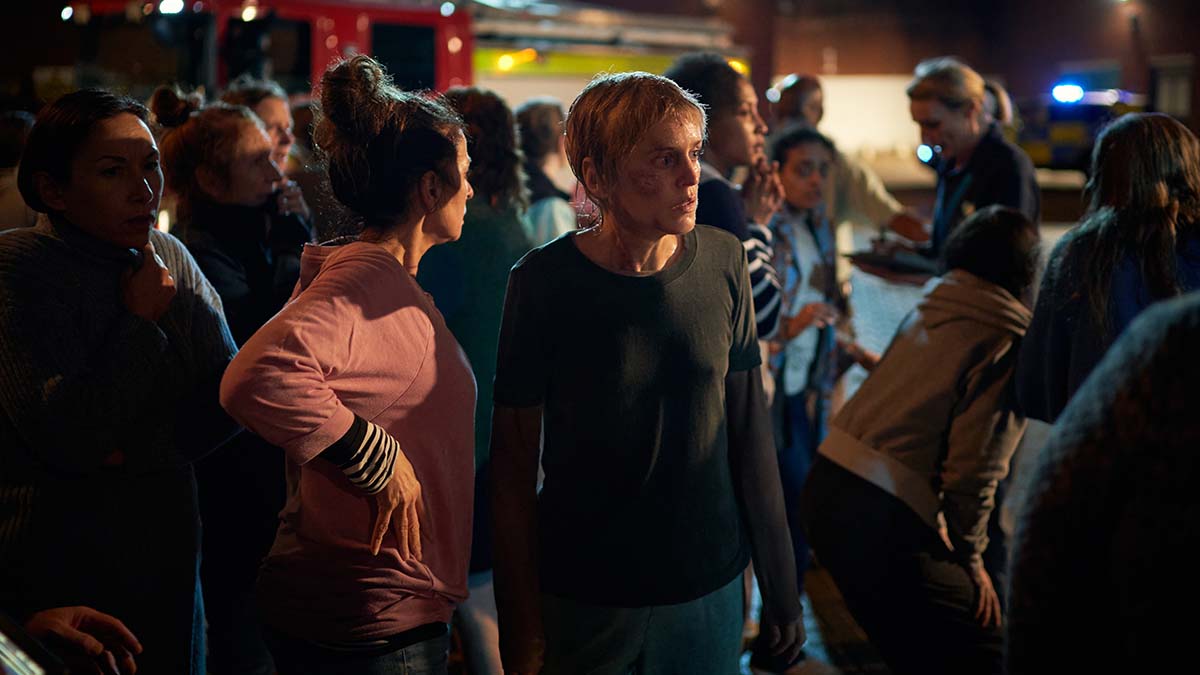 Emma (Emily Watson) finally unearthed the truth about why Connie (Denise Gough) drove her car into a river on the final episode of ‘Too Close’.

If you want to avoid spoilers for ‘Too Close’ stop reading now.

The episode opened with Connie looking on as her bed burned after she’d started a fire with the lighter she stole from Emma. The facility was evacuated and the sprinkler system turned on, as Connie was led outside, where she started to panic as the fire engines drew closer. Emma meanwhile was having a good time with Dougie at the party, and letting her hair down for once.

Addy (Chizzy Akudolu) searched the crowd outside the facility for Connie, who had disappeared.

At the pub, Emma chatted outside with Dougie and told him she suspected that her husband was having an affair. They shared advice they would tell their younger selves, and flirted. As Dougie went to kiss Emma, her phone rang and she answered it, killing the moment.

Connie took time away from the facility and the crowd and fell into a pond when she heard people calling her name. The incident brought back memories of what she’d done and she started to gasp for air. As she broke down, she remembered even more about that night, and we saw her watching as paramedics tried to resuscitate her daughter.

Emma arrived at the facility and was told that there was still no sign of Connie. As the patients went back into the facility, Emma headed around the back to the tree where the kite was stuck was. She found Connie up there trying to retrieve the kite and hysterical. Connie admitted that she’d driven the children off the bridge into the water and Emma told her that they had both survived. Connie threatened to jump out of the tree saying she should be dead, and Emma climbed up to help her down.

As she tried to calm her down, Emma talked to her about a woman who struggled with depression after the birth of her daughter. As Emma continued talking, Connie started to climb down. They were interrupted and Emma stopped talking.

Emma visited Connie’s doctor to discuss the treatment and pills that she had prescribed to Connie. Her line of enquiry upset the doctor who suggested Emma spoke to Connie’s husband. Emma’s next stop was to see Karl (Jamie Sives) to find out how he was doing and to ask how Connie had seemed in the days leading up to the incident. Karl admitted that Connie had been living with her father because he didn’t want the kids to see her odd behaviour.

Emma offered to give Karl a lift and they stopped off at Connie’s father’s house, who let Emma into the room Connie had been sleeping in. It was in a state and Emma looked through the medications she could find. She found a diary where Connie had written that she wasn’t a junkie.

Following that discovery, Emma went to the hospital with Karl and she saw both the children in their hospital beds in medically-induced comas. That caused Emma to leave the hospital quickly and she sat in her car, rocked by old memories.

We then saw Emma following a man into a pub, the same man she’d been watching in the previous episode. After going to the toilet, Emma sat down by the man at the bar and started speaking to him. It was revealed the man was Kenneth Baines. When he realised who she was, he got emotional as did Emma so Emma suggested they go outside so she can have a cigarette. As they chatted, Emma broke down in tears and Kenneth embraced her. Emma told him that her daughter’s death wasn’t his fault and he thanked her. Worse for wear, Emma was picked up by Dougie who took her home to a bemused Si (Risteard Cooper).

The next day Emma told Connie that she was replacing herself on the case with someone else. Connie reacted angrily and asked why Emma hated her. When Connie asked Emma to ask her another ‘stupid question’, Emma enquired about the day Connie stopped taking all of her medication.

A flashback saw Connie on the edge at her mother’s funeral. As she searched for her son, she saw a message from Ness (Thalissa Teixeira) on Karl’s phone asking him to come over later. At the wake, Connie got drunk and Ness noticed her behaviour. Connie became aggressive towards her and stormed off to the bathroom where she started taking pills while swigging champagne.

As the guests listened to Connie’s father singing, Connie was sliding down the stairs and encouraging the children to do the same. Karl went to see what was going on and stepped in before their daughter hurt herself on the stairs. He had a go at Connie and she broke down. Karl told her that she needed to get herself together and suggested she go and stay with her father.

Connie took Karl’s suggestion and as she lay in bed at her father’s, she noticed her hair was falling out. She took a pair of scissors and hacked her hair off before flushing all of her medication down the toilet, telling herself she was doing it for her children.

The action moved back to the present day as Emma asked more questions about the day that Connie almost killed the children. As she spoke, Connie said she missed her mother and became emotional again. The two women sang together before we moved into another flashback.

Connie was restless in bed and rushed downstairs to get tinfoil, which she taped over the window. We than saw her become increasingly more withdrawn as her father tried to look after her. In another moment Connie believed she was being attacked by cockroaches and poured bleach on herself to get rid of them, before trying to shower them off. Wandering around the house, Connie called out for her mother and she could hear her voice and saw her outside in the rain. Leaving the house, Connie tried to get to her mother.

Wandering around in the street, Connie approached the back of her house and saw Nessplaying happy families with Karl. She picked up a garden fork and sobbed as she hallucinated that Ness and Karl were evil. Connie found the spare key and went round to the front of the house where she let herself in. She woke up her daughter and Ness’ daughter, and put them into the car before driving off in the heavy rain.

The story then reached the point that we saw in the first episode as Connie approached the crossing. The lights at the crossing looked like an evil face to her so she reversed the car, almost hitting the vehicle behind. When she looked out of the window again, she saw her mother at the other side of the crossing and that’s what prompted her to drive the car through the barrier and into the water.

Back at home, Emma and Si talked about selling their home. Emma said that she felt like they were betraying their daughter by moving. When Si seemed confused, Emma sat next to him on the bed and opened up to him about the day that their daughter died. In a flashback we saw Abigail having a tantrum as Emma pushed her in a pram down the street. She bumped into a friend and Emma started shouting at Abigail. When her phone rang, she turned her back on the pram, which then rolled into the street and under the wheels of a lorry.

With the truth out, Si said his daughter’s name and admitted that Emma had been right to accuse him of never saying it. Emma told Si that he was right to blame her and that she didn’t blame him for having an affair. Si was shocked at the accusation and he explained that what Emma had seen wasn’t what she thought it was. Breaking down, Emma let Si hold her.

Connie nervously waited to see her children. They arrived at the facility and Connie embraced her daughter. Her son wasn’t as pleased to see her and seemed afraid of his mother. Approaching him, she apologised for everything that she’d done and he told her she’d better not do it again. Connie embraced her son as Emma looked on. The two women saw one another and smiled. Emma entered the facility and went to see her new patient.

Read our ‘Too Close’ episode 1 recap

Read our ‘Too Close’ episode 2 recap

‘Too Close’ is available to watch now on the ITV Hub.