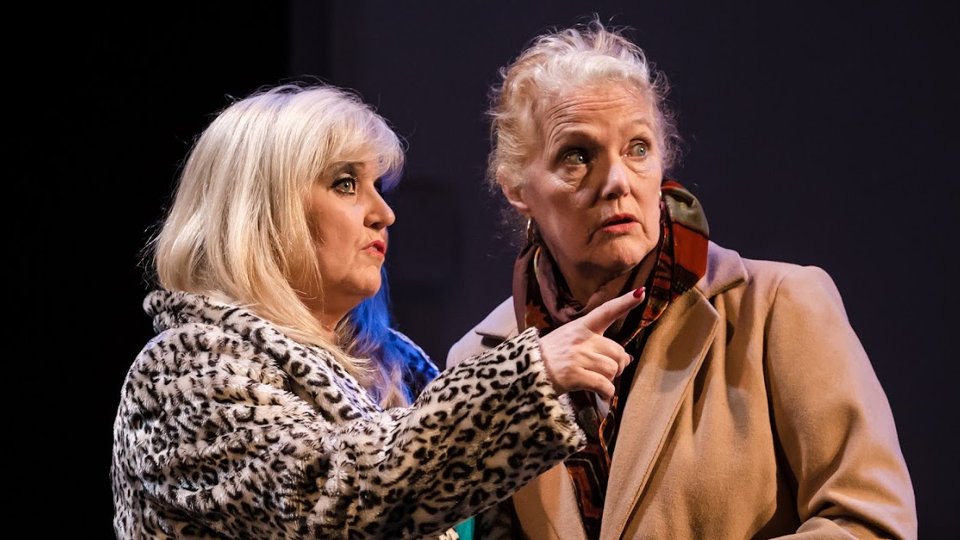 We need to talk about last night. I wasn’t expecting an evening of meaningless fun; that’s not what you promised. I expected things to go with a bang, of course – after all, I’m no prude – but I thought we’d share something deeper. When I walked through the red curtains and took my seat on a chair of green velvet, I was filled with anticipation and longing. Two hours later, I was hastily gathering my things and rushing towards the door, overcome with regret and sorrow.

It takes some doing to balls up a musical named Rumpy Pumpy!, yet writerBarbara Jane Mackie has sucked the life out of what could have been an intensely satisfying comedy drama. On paper, it sounds like the perfect romp: Jean Johnson and Shirley Landels, two genteel women from the Hampshire branch of the Women’s Institute (WI), strip off their baking aprons to go in search of “the perfect brothel”.

The plucky pensioners aren’t looking for a squirt of extra cream for a banana split, they’re on a mission to secure legal rights and better working conditions for women in the sex trade. Add the fact that it’s based on a true story and it suddenly promises to be the next Calendar Girls. Sadly, Rumpy Pumpy! doesn’t rise beyond a tawdry joke.

Not even the mega-watt smile of Linda Nolan (as brothel madame Holly Spencer), and the acclaimed acting skills of Louise Jameson and Tricia Deighton (the WI campaigners) can disguise the clumsy structure of the narrative. “You ladies bring the tea and we’ll bring the crumpets!” chirps Nolan but all Rumpy Pumpy! dishes up is watered down sauce.

The first act is overwhelmingly preoccupied with the girls who work at Spencer’s brothel, The Blue Saloon, and our WI heroines are reduced to nothing more than extras in a production that’s supposed to celebrate their achievements. Mags (Claudia Cadette) is Spencer’s best friend and a victim of domestic abuse. Goisa (Sally Frith) is an illegal immigrant from Poland who also works as a cleaner. Cash-strapped law student, Carol (Liberty Buckland), is ambitious and determined to help her ageing mother and Celia (Scarlet Wilderink) courts danger as a police officer moonlighting as a prostitute.

Keen to ‘cuff them all is DC Hecks (Basienka Blake). Her vendetta against Spencer is illustrated as a maniacal obsession in the first act before morphing into something out of a Carry On film in Act 2. Strangely, the script only allows for one stand-out performer, Deighton, who is blessed with an amusing succession of one liners: “You do bring me to the most marvellous places, Jean, dear.”

Former pop singer, Alex Roots, puts in a good turn as Spencer’s daughter and ex-prostitute, Sandi. Her solo of A Girl Like Me is one of the stronger vocal performances. The play’s title track (Rumpy Pumpy, Pumpy, Pumpy, Pumpy!) is a decent foot stomper and powerful warbling by Nolan and Blake makes ‘My Nemesis’ a memorable duet.

Unfortunately, the remaining tracks from the show’s 22 numbers are overwhelmingly forgettable, save for the crude Boobs, Tubes, Jellies and Lubes. I doubt I shall ever forget that chorus: “Boobs, tubes, jellies and lubes all do the trick if you’ve a problem with a prick.” Sage advice.

Jokes aside, a tighter narrative – preferably offering a closer look at Johnson and Landels – along with catchier songs, more laughs and greater attention to detail would certainly help to elevate the production. Continuity errors, such as the reception stand in The Blue Saloon jumping from the right of a doorway to the left in certain scenes, seems particularly careless when the set is no more than the modest glow of a red light over a stand and chairs.

Rumpy Pumpy! is a haphazard musical that rushes towards a climax without ever pausing to wonder if it’s hitting the mark with its audience. A film version is reportedly in production so let’s hope Johnson and Landels receive the tribute they deserve. As it stands, when it comes to respectable older ladies saving the day, Helen Hayes and Joan Simms are still the leaders of the pack in Disney’s 1975 comedy film, One of Our Dinosaurs Is Missing. It may be a children’s movie, but there’s a lot Rumpy Pumpy! could borrow from those innocent-looking nannies.