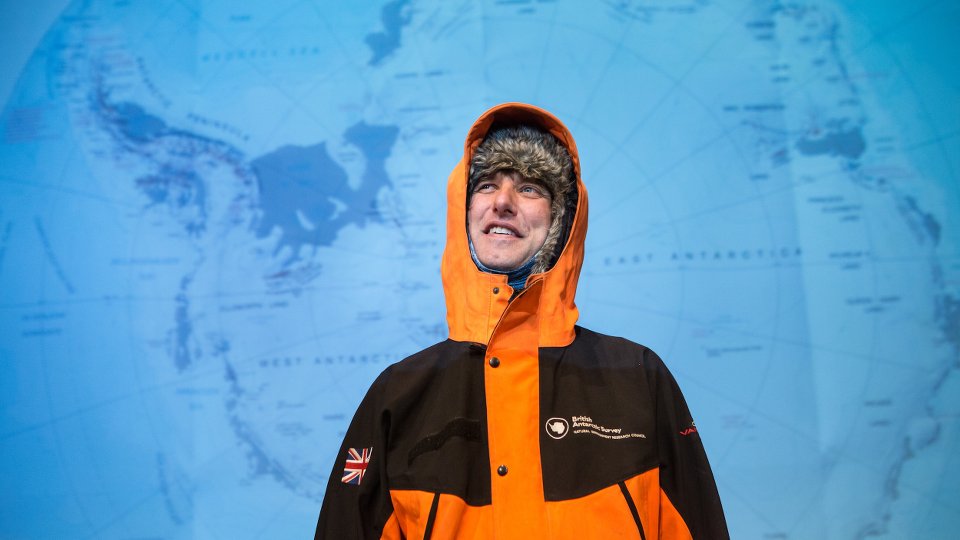 I’m at the Brighton Dome for the sold-out Antarctica show and I’m not entirely sure what to expect. I know it’s about the experiences of Artist Chris Dobrowolski during his travels in the Polar region, and in the event description there is mention of Ladybird books and gold picture frames. By the end of the show, I wonder if the description was intentionally vague. I realise that much of what I know about Antarctica has been learnt through watching BBC wildlife programs or school history lessons on the failed expedition led by Captain Scott.

I also know Doctors visit Mount Everest to learn about caring for patients at low oxygen levels and Scientists model alien environments based on knowledge of the inhospitable deserts of Antarctica. So, extreme environments have their place in science, in medicine, but what about art?

Dobrowolski specialises in failure. It is a theme of his art that he is keen to highlight and celebrate. His artwork includes building vehicles from unlikely objects and then trying to travel in them. His boat sank and his plane crashed but rather than dampen his spirits these projects, we are told, are key to being an artist. Artists learn how to fail as part of their process. This is what inspired Dobrowolski’s proposal to travel to Antarctica, following in the snow prints of Captain Scott. While he was there he planned to compare the icy reality to images and objects he had collected and he also planned to build a sleigh from gold picture frames. The idea was intriguing and charming, it was also brave.

Dobrowolski packed his ladybird books, plastic toys and recycled pictures frames, he travelled to the southernmost tip of the Earth to create art on the icy planes of Antarctica. The evening began with a slide show, which was like viewing someone’s holiday snaps. The pictures led to a narrative that was entertaining because it was fearless. There was so much that could go wrong, whether it was sepsis from the bite of a seal or falling down a crevice, the depth of a thirty story building. Here was a man with sea sickness stuck on a boat for four weeks longer than he expected. If he didn’t tell his tale with humour it would have been miserable. But humour and vitality is what Dobrowolski brought to his pictures and videos of the distant sub-zero continent. Dobrowolski related stories of the scientists and crew he met and the stories he told were studded with coincidence and chance happenings; in these moments life mimicked art.

I thought it was lovely that it was his friends and his 30p purchase at a boot sale which inspired him. He seemed light hearted when describing failure in past projects, but he was keen that he met his brief – that he succeed in building a replica sleigh from gold picture frames. Dobrowolski’s show charted his three month adventure in Antarctica. I was laughing at the pitfalls and successes of the life of a modern artist. I think this is what this was, I’m still not sure. The photos he showed included dioramas and whaling re-enactments (with plastic toys).

There was an excellent impression of a Russian scientist, there were shots of bloody seal carcasses being eaten by the world’s only carnivorous ducks. It was eclectic. Antarctica is an environmentally protected region and it’s a tourist destination, it’s a cemetery for the most adventurous explorers. But through the viewpoint and adventures of Dobrowolski, it’s a silent, beautiful and harsh environment. For me, he removed the mythical status of the region. The show finished with a film in which the gilt-edged picture frame sleigh disappeared into the distance. I’m not sure I know how to interpret that, but I did enjoy it and I was entertained.

Advertisement. Scroll to continue reading.
In this article:Antarctica, Chris Dobrowolski, The Brighton Dome