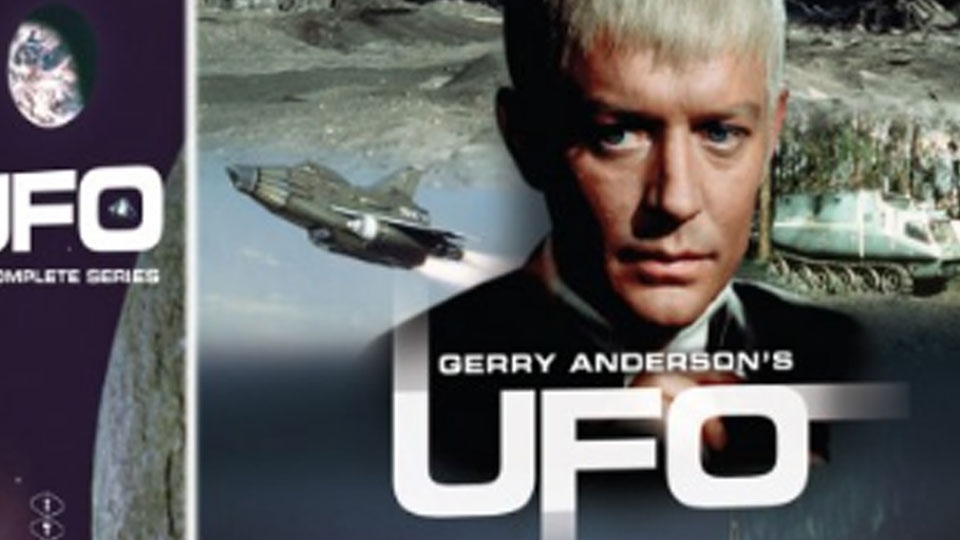 UFO is one of the most distinctive TV series of all time thanks to its inimitable design and concept. Gerry Anderson, best-known for his imaginative shows for children featuring marionettes (Thunderbirds, Captain Scarlet) developed UFO, which was the first to use live actors. Many of the regulars – Ed Bishop, Shane Rimmer, Jeremy Wilkin included – had worked as voice artists for Anderson’s earlier series.

UFO was made in 1970, but set in the near-future of 1980. Whilst the sci-fi concept is futuristic, and depicts a colonized moon, the surrounding culture within which our heroes at the top secret organisation of SHADO move is much like, well, 1970. Although this is a deliberate move, the extreme designs of SHADO, everything from the costumes to the cars, gives an oddly jarring effect when we see the actors in ordinary surroundings, complete with the now-retro decor of the late 60s and early 70s.

SHADO exists to investigate threats of alien invasion. Its employees are distinctive from the rest of humanity thanks to the high technology available to them, and their choice of fashions. Slim-fitting Nehru-suits are in, as are, for the women, purple wigs and heavy eye-shadow. The underwater Skydiver crew wear see-through fishnet vests. Blond-wigged star Ed Bishop (playing Commander Ed Straker) drives a futuristic 70s brown car. It all looks amazing!

The twenty-six episodes that comprise the series have been released in high-definition for the first time, and they look outstanding, with vivid colours, clear picture and excellent sound. UFO benefits from having been shot entirely on good-quality film, which means its restoration is a noticeable step up. You can see the eyeliner on Ed Bishop’s face in every scene.

Although the series is high on concept and design, it’s hard to state with much conviction what it’s really all about. The tenuous link is a threat to the earth from humanoid aliens who appear from time to time in their spacecraft. The green-skinned, silent menaces are never fulled explained, or even named, and we never see more than two of them at the same time – hardly an invasion force. In many ways, that makes them even more threatening. But there are internal inconsistencies about what they want, which varies from harvesting human organs to destroying the earth, presumably depending on who the script writer was for individual episodes.

Some episodes make little sense. Mindbender is perhaps the strangest of all. In it, Ed Straker hallucinates, believing he is an actor in a science-fiction show. The fourth wall is broken, with the camera showing Bishop wandering around Pinewood film studios, across the backs of sets, and watching rushes of earlier episodes with his co-star, ‘Mike’. The bizarre storytelling device is repeated in Timelash, in which Straker runs around the studios of various other productions that were shooting at Pinewood, whilst time has, rather unconvincingly, stopped. The episode Ordeal sees the other leading man, Michael Billington, playing Paul Foster, abducted by the aliens after taking a sauna. It later turns out to have all been a dream, but this makes bewilderingly little sense since there are scenes between other characters not involving Foster. Still, we happily get to see the stunning Billington virtually naked for the best part of the episode, so along with the usually sumptuous visuals, the episode is daft and poorly written, but more of a feast for the eyes than usual. Not a bad way of summarising the show, on reflection.

There are a few storylines that adopt a more serious tone. The Long Sleep openly examines drug use amongst teenagers, whilst A Question of Priorities, arguably the strongest of the whole series, sees Straker with a terrible moral dilemma – attend to his duty for SHADO or help his son after a road traffic accident.

You’ll spot some very familiar faces of the era – George Sewell, who sadly disappears part-way through; and the glamorous Wanda Ventham, who oddly never has a fling with Straker (perhaps the homoeroticism of the show isn’t entirely in my imagination?) Co-stars are of a high calibre too. Philip Madoc makes a few appearances whilst Jean Marsh, Lois Maxwell, Steven Berkoff, Patrick Mower and Adrienne Corri all appear at least once.

As well as the stunning restoration work and opportunity to revisit this unique series in high definition, the release also contains plenty of extras for aficionados. From Earth to the Moon is a brand new feature-length documentary. Sadly, so many of the key players are now dead, but there is archive footage of Gerry and Sylvia Anderson talking about the show, as well as new footage from the survivors. David Collings makes a very genial and eccentric contribution, and Jeremy Wilkin appears in tracksuit bottoms held up with string. They talk about working on the full range of Gerry Anderson productions, since there was a lot of crossover. Another documentary examines the role of women in the show, but it’s hard to agree UFO was as progressive as they like to make out. The six-disc box set also includes a book about the making of the show.

The saddest thing is that UFO had so much potential, and had the original series offered just a shade more focus in its narrative drive, a second season would have been a shoe-in. As it is, UFO was abandoned, and Gerry Anderson repurposed his plans and made Space: 1999 instead: a show that had a much stronger grip of its own premise, but was worthy and dull, and never, ever, anything like as much fun as UFO.