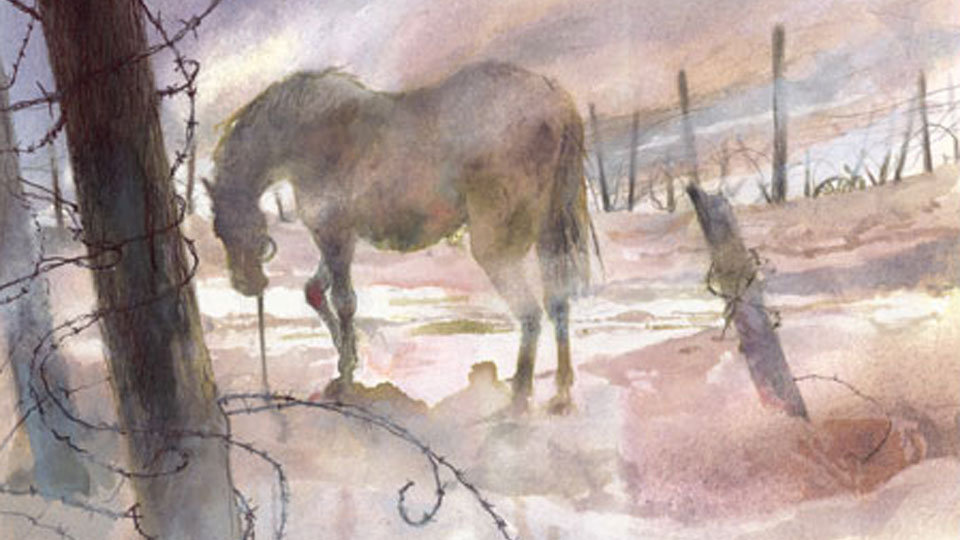 At this time of year, especially during the centenary period of the First World War, we remember more poignantly than ever the most brutal conflict in human history and the sacrifices earlier generations made. It perhaps explains the stunning recrudescence and enduring popularity of Michael Morpurgo’s 1982 novel War Horse, which has more recently been republished as well as turned into a movie and smash hit stage play.

The Folio Society is the latest to celebrate the story with this brand new edition which features an exclusive introduction by the author, evocative illustrations by Alan Marks and a horse-shaped bookmark. Morpurgo speaks in the introduction about how illustrators have helped to serve his stories and bring them to life throughout his career, and undoubtedly Marks’ paintings make a strong impact. There is a vivid, visual quality to Morpurgo’s prose, which is why the story translates well to other mediums.

War Horse tells the story from the point of view of a horse called Joey who finds a home at the Narracott’s farm shortly before the outbreak of WWI, where he’s looked after and adored by the teenager Albert. When his father sells Joey to the army to fund his drinking habit, Albert is devastated, but swears he will go looking for Joey. We follow the horse’s adventures in France as he at first assists the British cavalry, and then finds a temporary home with an elderly farmer and his granddaughter. This time it’s the German army who find a use for him, and he’s taken back to the war, before he ends up injured in no man’s land. Through every twist and turn of the book, Joey never finds peace for long, and Morpurgo keeps you guessing about his ultimate fate through a series of unexpected reversals and surprises.

This is the sort of children’s book that is accessible to older audiences too. It would be a great gift for an inquiring child, especially if they’ve expressed an interest in the current centenary. Whilst aspects of the story are sentimental, Morpurgo doesn’t avoid the issue of the horrors of warfare and the death and devastation it causes. As such, War Horse is an excellent choice for younger readers: it brings to life a bleak period in human history with a timeless and emotionally-engaging story.  The kindness of some of the characters, especially during the hardship of war, stretches credulity for older readers, but such moments no way lessen the emotional impact of the story.

Morpurgo writes with great lucidity and economy. The book is fairly short, and digestible within one or two sittings, but it covers a lot of ground in amazingly few words. The absence of fat in the text is one of the book’s great assets. Another is its strong moral centre. Morpurgo sees the conflict through the horse’s eyes, and involves Joey in the famed football match between the British and the Germans that served as a temporary suspension of hostilities. The Germans are depicted as humans too, with compassion and a sense of duty. War Horse also highlights the enormous debt both sides owe to the animals who served alongside humans throughout the war – a contribution usually overlooked.

Overall, it’s easy to see why War Horse continues to capture the imaginations and pull on the heartstrings of new generations of readers. This timely release provides a beautiful edition of a modern children’s classic.