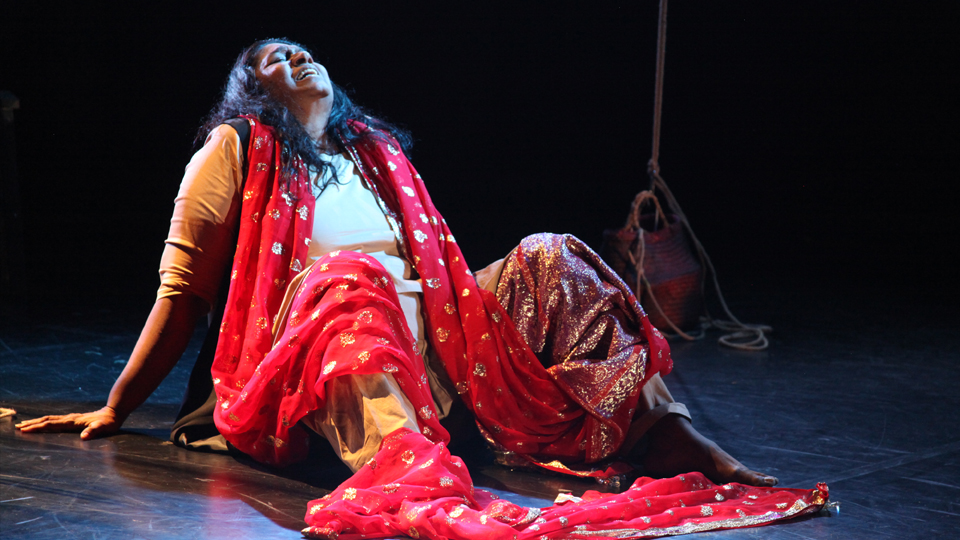 This month, Rasa Theatre redresses West Yorkshire Playhouse in vibrant colours for Whose Sari Now? The one-woman show consists of an anthology of five stories which delve into the history and significance of the sari, starring its writer, Rani Moorthy.

Through monologue, rap, mime, subtitles and dance, Rani Moorthy unravels the allure of the sari and its place in centuries of culture. Showcasing five fascinating characters, the play is bookended by the figure of an endearing elderly woman nearing the end of her life. She has amassed a trove of saris, each with a tale of their own. Moorthy plays the part with warmth, engaging directly with the audience with a casual flair which approaches stand-up comedy. The dialogue is natural, bubbling with charismatic British Asian humour and sharp observation.

In Whose Sari Now? we learn of different types of sari; saris for weddings, saris for funerals, saris for travel, saris for Marks & Spencer. Moorthy’s performance is naturally charming and uplifting, yet it is loaded with poignancy and pathos. For her elderly character, life is punctuated by the saris she has worn and cherished; they symbolise moments of happiness, episodes of devastation. It is an engaging performance and one which instantly draws in its audience, due in part to the complex business of actually wearing a sari; forming an elegant garment from an anonymous length of silk.

Moorthy populates the play with many voices in a charged performance which is nuanced and powerful. Shifts between personas are transformative and the process of disrobing between characters has never felt quite so significant. A whole scene is performed with only a few broken English words – the rest supported by subtitles – in a superb demonstration of the power of performance overcoming barriers of language.

Saris are used as props as well as clothes, particularly in a scene where a woman is giving birth before a backdrop of war and genocide. Moorthy’s manipulation of a length of red silk during labour provides an indelible image, particularly when the material is bundled up into the form of newly born twins. This is theatre at its most innovative; impressing upon its audience vivid and shocking imagery through pure performance.

Kimerbley Sykes’ direction is considered and simple, utilising a landscape of saris as the show’s colourful backdrop. Occasionally back-lit, the silks radiate vivid shades and take on the effect of gauze, allowing Moorthy to perform as a silhouette during a particularly aggressive scene addressing transgender. With occasional projection work and simple lighting effects, the stage is ultimately a showcase for saris and they remain an impressive focal point. The stage has the feeling of a Technicolor galleon in full sail, embarking on rich voyage.

Like the garment at its centre, Whose Sari Now? is full of unexpected twists, turns and folds, often wrought with tension and loose with casual humour. The play is a delightful insight into the rich, colourful history of one of the most significant and enduring symbols of identity. Moorthy informs and teaches; taking an oblique perspective on thousands of years of history, all woven into the fabric of life from birth, to marriage and death. Bound with colour and flair, Whose Sari Now? is a show to be enveloped in at the first opportunity.