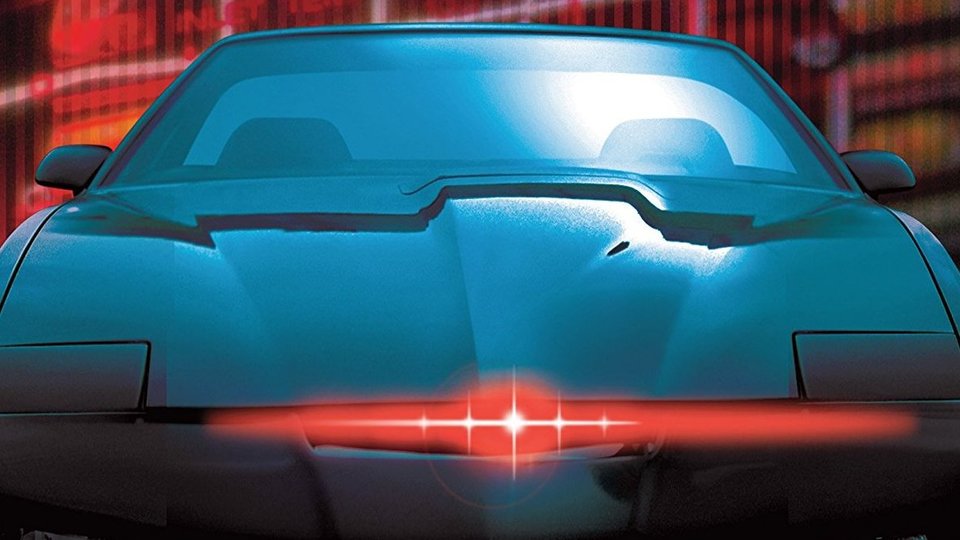 Gear up for action with superstar David Hasselhoff and his supercar K.I.T.T. as they throttle crime in all 90 high-octane episodes of Knight Rider now fully restored and in hi-definition.

KITT for TATT: K.I.T.T. – Knight Industries Two Thousand, was originally named T.A.T.T. -Trans Am Two Thousand. It was 6 months into filming before David Hasselhoff and William Daniels (voice of K.I.T.T.) met face to face. Michael’s boss was played by Edward Mulhare – an Irish actor who had learnt his trade in London’s West End with Orson Welles and John Gielgud.

Just after Larson approached Vista Group who represented GM about using the Pontiac Trans Am for Knight Rider, a train carrying 32 brand new Trans Ams derailed. Most of the cars were still in pristine condition but laws restricting the sale of cars involved in a crash meant that GM donated all the cars to Larson as long as they were never used on the road.

Half were used on Knight Rider and half on The Fall Guy. It was a good move by GM. Due to the success of Knight Rider Pontiac was swamped with customers requesting black Firebird Trans-Ams with T-tops, tan interiors, and red lights on the front bumper. The scanner based on the Cylon light bar in Battlestar Galactica was available in kit form for Trans-Ams for several years following the shows cancellation.

The “auto-cruise” car was driven by a stunt driver hiding inside the driver seat. In part 2 of Episode Knight of the Phoenix while KITT is driving back from the Sheriff’s station you can see the driver’s arm appearing out of the upholstery.

Synopsis: Michael Knight, a detective thought to be dead, is given a new face and identity. His assignment to fight crime with the help of an artificially intelligent, talking car named K.I.T.T., a high-speed, futuristic weapon outfitted with high-tech gadgets and a personality of its own. Driven by justice, they set out to take down criminals who operate above the law.

Cast: David Hasselhoff, Edward Mulhare, Patricia McPherson, Rebecca Holden, Peter Parros, William Daniels as the voice of K.I.T.T and Richard Basehart (The iconic voice-over at the start of the credits).

For your chance to win Knight Rider on Blu-ray, all you need to do is answer the following question below.