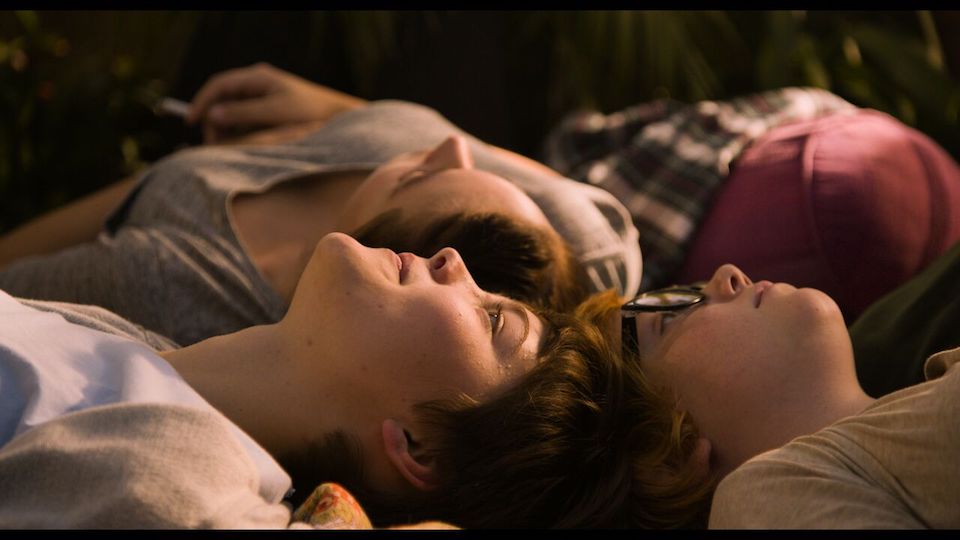 “If you’re blind to what is different, this story is not for you.” These words appear in the opening scene, in a framed picture being consumed by fire, and effectively summarise the film and it’s myriad themes. Asking important questions about gender and sexuality, whilst mixing fairytale and gritty realism, Girls Lost is a film that rewards those with open eyes, hearts, and minds. Telling the story of three bullied teenage girls, Alexandra-Therese Keining’s magical coming-of-age drama vividly brings to life all the pain, confusion, and beauty of growing up and not truly knowing who you are.

Kim (Tuva Jagell) feels like she doesn’t belong anywhere. At home, at school, or even in her own skin. She has short hair and wears boys clothes. She has posters on her wall of androgynous icons such as Patti Smith, Grace Jones, and David Bowie. She and her friends, Bella (Wilma Holmén) and Momo (Louise Nyvall) are subjected to horrendous abuse at school, where being called an ugly dyke cunt whore is an everyday occurrence, and an uncaring faculty turn a blind eye. They find escape in their beloved greenhouse in Bella’s garden. It is here that they plant the mysterious seed that flowers a plant with magical qualities. When they drink its nectar, they physically transform into boys.

This doesn’t just change their appearance (achieved with subtly wonderful special effects and some sublime casting) but it entirely changes the world around them. As boys they are accepted by those who would normally shun them. They are invited to play football, to hang out and drink and smoke and have fun. As boys, the world is an altogether different place.

They promise not to do it again unless they are all together, but the thrill is especially strong for Kim, feeling in her male body as if she finally belongs. Momo and Bella soon tire of the laddish behaviour, but Kim wants to hang out with the boys more and more, especially Tony (Mandus Berg), a petty criminal, with whom she becomes infatuated. A sense of betrayal and sexual jealousy drives a wedge between Kim and her friends.

Girls Lost is stunning to look at, with beautiful production design, costumes and cinematography. Every frame is beautiful. The daytime scenes are shot through with a dreamy soft light, bathed in that unmistakable Scandi sunshine. Contrasted with this is the twinkly, shimmering fairytale-esque nighttime sequences, that seem innocent, but then begin to pulse with horror. The grungy and squelchy synth score, with its echoes of John Carpenter only adds to the growing sense of unease.

The film is rich with evocative imagery, motifs and symbolism. Some of it, such as the lunar imagery and references to butterflies is a bit on the nose, but is nevertheless effective. The transformation is like a drug. For all its heady joys, the emotions and desires at the root are too strong and powerful, spilling into violence as Kim struggles to comprehend what is happening to her. As she struggles with her identity, Tony is struggling with his sexuality. An attempt to reassert his masculinity leads to the films most shocking scene – a scene that will almost certainly prevent this film from being shown in schools, which is a terrible shame.

Not everything in the film works. The teenage love triangle in the third act doesn’t come with the same level of authenticity as the relationship between the three girls, which seemed to convincingly transcend friendship. And as stated at the start of the review, you will need a very open mind to accept the complete lack of intervening grown ups in this world.

However, this is a truly original and vital piece of filmmaking, and Keining deserves great credit for her compassionate handling of such complex material. The cast, especially the girls and boys playing the three central characters – who are all mostly newcomers – are just fantastic. The film is bookended with scenes of fire, emblematic of a life being scorched away. In the hazy and abstruse coda, Keining hints at something new and wonderful, as the camera pulls away and rises to meet the horizon in a final shot of breathtaking beauty.