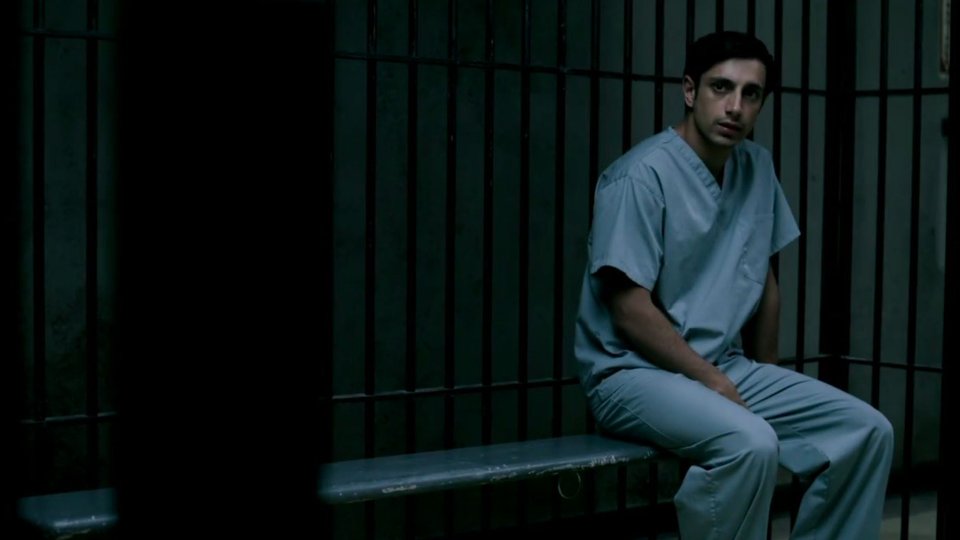 The Night Of arrived in the US in June and it was a rare example of a series that picked up enough buzz to increase its ratings week-on-week. By the time the 8 episode limited series concluded, the audience had more than doubled in size. Here in the UK the show arrived with plenty of noise and it became must-watch TV. The series is based on Peter Moffat’s 2008 British drama Criminal Justice, the first season of which told a very similar story over just 5 episodes.

British actor Riz Ahmed stars in the central role of Nasir Khan, a college student who resides with his family in Queens. One night he takes his father’s cab into Manhattan to attend a party and he accidentally picks up Andrea (Sofia Black D’Elia), who thinks he’s a cab driver. Despite coming clean, she insists on being taken to the beach and the two form an immediate connection. After taking drugs together, Naz goes home with Andrea where the two have sex. When he wakes the next morning, Naz finds Andrea dead and a series of events lead to him being taken into police custody for the murder.

Over its 8 episodes, The Night Of takes you for a twisty ride with plenty of turns. Naz has no recollection of the murder but is adamant that he had nothing to do with it. Separated from his family and coerced by detective Dennis Box (Bill Camp), Naz panics and he crosses paths with lawyer John Stone (John Turturro) who agrees to take on his case. Is Naz guilty or innocent? I of course wouldn’t disclose that in this review!

There’s no doubt that The Night Of is a gripping crime drama. It’s the kind of show that binge-watching was made for and it’s a surprisingly rich character-driven series. It could have easily turned into a sensationalised murder story but it doesn’t, instead focusing on the main characters and letting them drive forward the story.

The show is not without its issues though. The first episode piles coincidence upon coincidence to ensure that Naz ends up in prison and accused of murder. It feels a little bit of a clumsy set up and it does stretch credibility in a drama that otherwise feels pretty realistic. You have to get over that first series of events and go with the rest of the series though in order to fully appreciate the story it has to tell.

Riz Ahmed gives a stellar performance as Naz and it has surely marked him out as a British star with the potential to hit the big time in the US. Despite a few dodgy moments with his accent, he’s a total revelation and the really selling point of the series. You see him transform from wide-eyed naïve college boy into a young adult man taking accountability for his decisions. John Turturro is also superb as bolshy lawyer John Stone, who at first takes pity on Naz after seeing him sitting alone in a prison cell.

The Night Of is a solid crime drama but I’m not entirely certain it lives up to the hype that surrounds it. With the criticisms I’ve outlined, it’s certainly one of the better crime dramas in recent years but it’s not quite the masterclass of TV some would lead you to believe. When compared to something like The People Vs. O.J. Simpson: American Crime Story, it trails behind. There’s plenty to enjoy here but you need to not over-think what’s unravelling before your eyes if you want to get the most out of it.