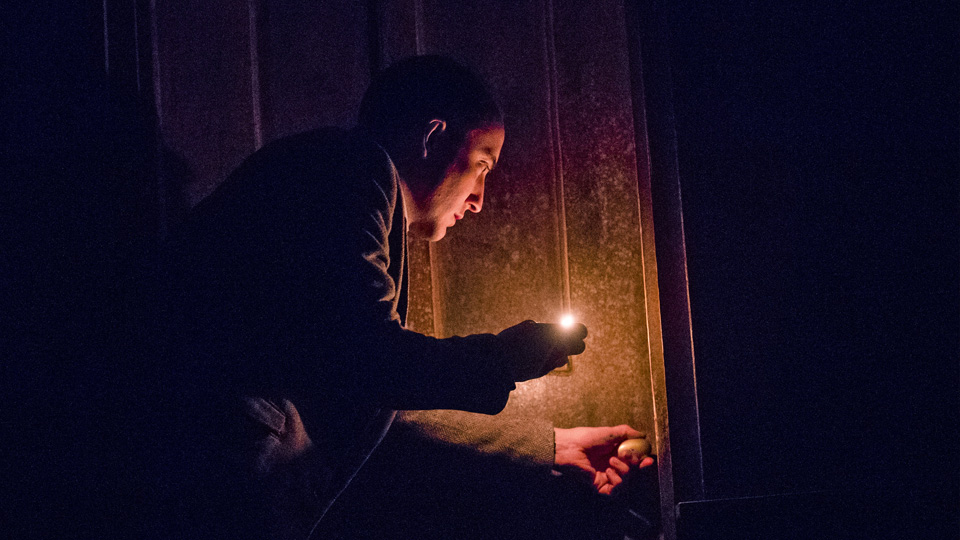 The Woman in Black

As the winter nights draw in, The Woman In Black creeps into West Yorkshire Playhouse in perfect time ahead of a chilling Halloween.

Adapted from the novel by Susan Hill, Stephen Mallatratt’s theatrical re-imagining has become a classic since it opened in Scarborough in the late Eighties. Now it is the second longest-running drama in the West End, with a reputation for terrifying audiences.

The play is set in a theatre a hundred years ago. The audience is introduced to Arthur Kipps, not a man of the theatre. He is reliving his experience as a junior solicitor and embarking on a journey to the North East coast, to arrange the papers of a recently deceased woman. Kipps is played with a bubbling warmth and a thriving confidence by David Acton. He is joined by Matthew Spencer, credited only as The Actor, in a vibrant and energetic performance who assumes the role-within-a-role of a young Arthur, whilst Kipps himself embodies a sundry of supporting characters.

The Woman In Black is a play which showcases the ingenuity of pure theatre craft; where necessity is the mother of invention. Side-stepping attempts to stage complex vistas and locations as depicted in Hill’s novel, settings are imagined within the creative confines of a primitive space adorned with sheets and boards. Basic props such as a laundry basket doubles up as a bed, horse-drawn carriage or train. This is a show driven wholly by its two central performances, which are continuously innovative, playful and cheeky, providing a levity which initially conceals the seeping darkness at the heart of the tale.

Essentially told in a dramatic workshop environment, Kipps and The Actor walk through the intricacies of the plot and characterisation, bisecting time and locations through imaginative physical theatre. Spider the dog is affectionately realised through mime, whilst traditional theatrical lighting basks the settings in an evocative, candle-light glow. As chilling moments are recounted, the dark figure of the woman in black can occasionally be glimpsed; a skeletal, crow-like statue who haunts the very fabric of the auditorium. This is a play which is heavy with ambience and atmosphere, drummed up by its powerful leads.

Matthew Spencer as The Actor in The Woman in Black. Photo: PP Productions / WY Playhouse.

Meta-theatre is often fun; it breaks down the convention of spectator and player, bringing the audience into the very locus of the action. As such, the auditorium is as much the heart of the action as the stage, occupying the same space in which the ghostly woman in black walks. It’s an ingenious mechanism and one which provides a constant feeling of unrest. There is no separation nor luxury of distance for the voyeur; the woman in black could literally be stood at your shoulder.

Robin Herford’s direction is innovative and arresting, employing simple lighting effects by Kevin Sleep with movie-scape sound by Theo Holloway, which grows in intensity as the tension increases. Like all good ghost stories, the story is a slow burner initially, though Herford ensures that the pace is always brisk, thanks to a bright-eyed performance from Spencer, punctuated with an irresistibly comic performance from Action.

The play provides a host of indelible visual effects, from the traditional use of back lit gauze to immersive smoke effects, buttressed with startlingly loud bangs and screams. Offering all the mechanics for classic jump-scares whilst doubling up with continuously arresting performances, The Woman in Black is a foreboding experience, issuing an almost unbearable intensity which is as stylish as it is suspenseful.

As part of the GCSE Drama curriculum, The Woman in Black is a textbook example of what can be achieved in a theatrical space with very little. It is a show loaded with unease and atmosphere, pitched and paced to wring tension from pure silence. The perfect chiller to start your Halloween, The Woman In Black is a scream from curtain up to lights out.