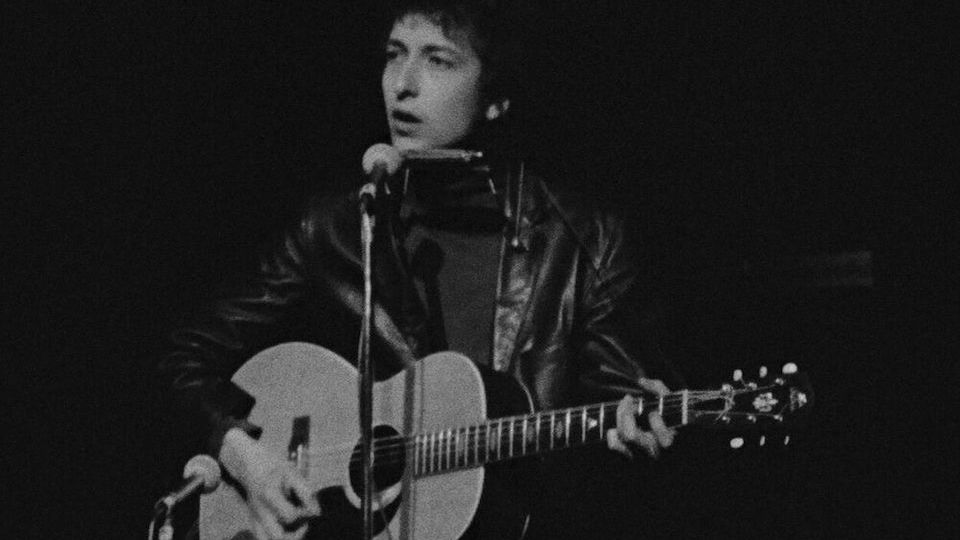 The purpose of Cinéma vérité is to reveal the truth, to strip away the artifice and unveil the unequivocal reality of its subject. Documentarian D.A. Pennebaker is one of the great exponents of this technique, and a true pioneer of the direct cinema of truth. In 1965 he accompanied Bob Dylan to film his tour of the UK. Laid bare by Pennebaker’s ever-present camera, the truth of Bob Dylan is slowly revealed.

The film kicks off in style, with Dylan in an alleyway holding up cue cards, whilst his raucous Subterranean Homesick Blues plays over the soundtrack. This famous footage, with Allen Ginsberg loitering in the background would later become one of the most influential music videos of all time.

We then dive straight into the tour. There is no clear sequence of events, or linear narrative, and this seems a more than apt way to try and capture the freewheelin’ Bob Dylan. This was his final tour as a solo acoustic artist, before his hugely controversial decision to electric. This is Dylan at his peak. The cool, talented, and elusive genius. Skinny trousers, tousled hair, sunglasses and cigarettes. Every modern rock star owes their image to this man.

But Pennebaker just keeps on filming, and the truth starts to work its way to the surface. We see Dylan in numerous interviews, dealing with the British press, in which he occasionally comes off as an immature little brat. In other interviews he displays a startling level of arrogance. He also shocks viewers by revealing that despite his genius as a lyricist, he is in reality a humourless dullard, caught up in the circus of hype. He has been elevated to the level of prophet and poet – the angry young folk singer who is going to change the world. This is something he is clearly uncomfortable with. As he says himself (arrogantly or truthfully, you decide) he just sees himself as a guitar player.

The film is full of extraordinary encounters and iconic performances. From the wonderful sequence of him playing Hank Williams songs with Joan Baez, to the cruel exchange with a student journalist, whom he mercilessly mocks whilst his entourage all laugh. One of the most fascinating encounters in the film is with British singer-songwriter Donovan. From the moment Dylan arrives in the UK, his name is mentioned alongside Donovan in the press, setting up a sort of rivalry between the two. Donovan had come under some scrutiny for being a Dylan copycat.

The meeting takes place in Dylan’s hotel room, and Donovan plays one of his songs for the people in the room. It might as well be a Bob Dylan song. Dylan says, “Hey that’s a good song man” and then takes the guitar from Donovan and proceeds to play his masterpiece “Its All Over Now Baby Blue”. All the while he performs, he is looking towards his entourage and grinning. What exactly is he doing here? Is he putting Donovan in his place? Reminding everyone in the room that he is the alpha? The arrogant and confrontational side to his personality comes bursting through in this sequence.

These flashes of different personalities are the fundamental truth that Pennebaker uncovers about Dylan. He never truly relaxes. He never lets his guard down. He is constantly changing his persona depending on the people he is with. So who is this enigmatic artist? Is he the genius songwriter or arrogant brat? Is he the awkward loner or the attention-seeking alpha? Is he the thoughtful poet, or the dimwit trying to sound clever in front of the press?

The truth is, Dylan is all of these and none of them. He is a construct. He is an act, whether onstage or backstage. All those shifting chameleonic personas that would typify his career; the poet, the prophet, the outlaw, the jokerman, the faker, the contradiction, the folk hero, the rock star – Pennebaker captured them all. Don’t Look Back is without question the most insightful and most truthful portrayal of the artist Bob Dylan that you will ever see. Robert Allen Zimmerman does not appear in this film.

Advertisement. Scroll to continue reading.
In this article:Bob Dylan, Don't Look Back, The Criterion Collection