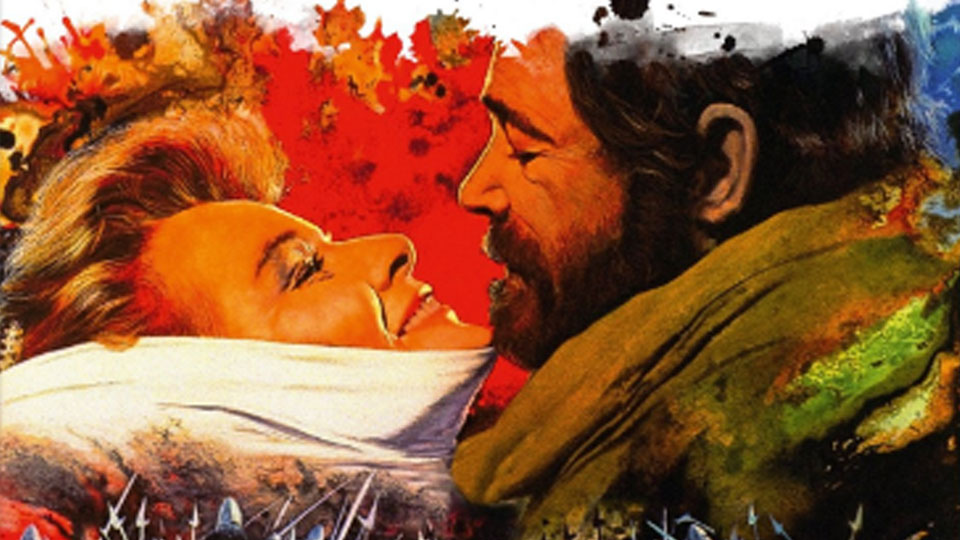 The Lion in Winter is a remarkable and important movie in the history of the British film industry. Not only did it team up Peter O’Toole with American legend Katharine Hepburn (who won an Oscar for her turn as Queen Eleanor of Aquitaine) but it also marked the cinematic debuts of two significant British talents – Anthony Hopkins and Timothy Dalton.

The film was released in 1968, and is based on James Goldman’s stage play of the same name. The Lion in Winter imagines a festive gathering of Henry II (Peter O’Toole), his estranged wife Eleanor (Katharine Hepburn), three sons (Anthony Hopkins, John Castle and the late Nigel Terry) and King Philip of France (Timothy Dalton) in England during the Twelfth Century. The get-together of the most power-mad people in Europe sees tempers fraying and sparks flying. Think your family dysfunctional and Christmastime an unbearable pressure cooker of tetchiness and clashing egos? The Lion in Winter takes this universal story of human misery and familial antipathy and takes it to an extreme, in the process weaving in an irreverent look at history as Henry battles with his wife and three sons over who will succeed him to the throne after his death.

You can tell The Lion in Winter is based on a stage play. It’s very talky, yet the dialogue is magnificent; the barbed put-downs thrown around are often funny.

Whilst Hepburn won the Oscar, I feel O’Toole’s performance is the stronger. He varies between anger and hysterics, and explores octaves of emotion within the same scene. Yet there’s also a restraint to his wholly believable characterization of a clever, cunning and ruthless king. Hepburn is excellent – as you’d expect – and the tears she sheds seem genuine and spontaneous, but the regularity with which she sheds them eventually works against the character. Eleanor is a strong, manipulative and self-contained woman: fewer tears would have made the rarer instances more powerful. Though ‘less is more’ was never Hepburn’s motto.

Then there’s Anthony Hopkins, bursting onto the big screen with amazing presence and thunder behind his pale eyes; his rich, mellifluous voice carrying a cartload of emotion. His star quality is obvious. So too is that of Timothy Dalton, who even at a tender age turns in a controlled performance. Whilst he would later, and brilliantly, play James Bond (until Daniel Craig the only portrayal of the part to bleed, to suffer, to have a moral compass – in other words, to be human) and play a succession of ruthless, mean-eyed kick-asses, his effete King Philip plays against later expectations. Dalton is stunningly handsome and a magnetic presence in every scene. The movie is exceptionally well-cast, but in recognising and giving sensational debuts to the outstanding talents of Hopkins and Dalton, it deserves especial credit.

The too-often underused John Castle is no less excellent. Geoffrey is a much less showy part, but Castle resists the temptation to overplay. His steely-eyed middle brother is an essential ingredient to the power struggle at the heart of the drama.

The only downsides of the movie are that Anthony Harvey’s direction is occasionally a touch flat, even for a piece based on a stage play, and the contrast between studio sets and location are impossible to disguise (especially in high definition). Yet once you’re engrossed in the story and in the performances, swept along by the stirring score by John Barry (whose last, and possibly best, James Bond contribution would be Dalton’s first – The Living Daylights), the points lost to aesthetics seem minor. Just sit back, enjoy the amazing cast, and be grateful your family isn’t as awful as Henry’s (unless, of course, it is).

Extra features include interviews with some of the leading cast members. There’s a sweet interview with an elderly Peter O’Toole as he recalls the history of his friendship with Hepburn and working with her on the movie. A new interview has John Castle (Geoffrey) recounting in detail the making of the film. There’s also an archive interview with Anthony Hopkins from the early 1990s.