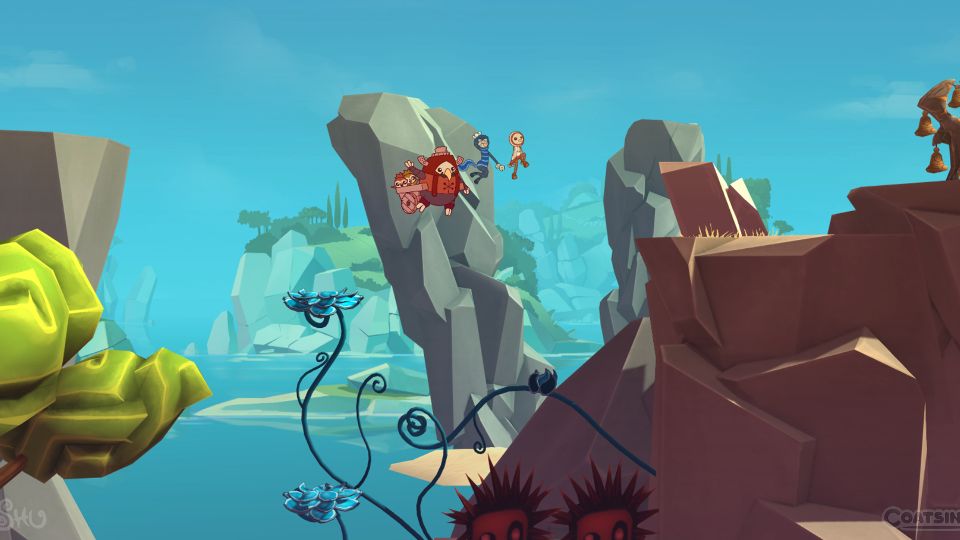 Shu is a 2D platformer developed by Coatsink and Secret Lunch. A huge storm is coming that threatens to put an end to the world. Naturally it’s your job to stop that happening which means you need to get to the Ancient Temple. You do so by controlling a tiny bird-like creature named Shu who has a little help from friends along the way.

The game is divided into 15 levels which are set across 5 different environments. Things start off easy and the game plays like a classic platformer as Shu can move, jump and glide around. Initially there is no urgency as you explore but this changes when the storm catches up with you. When this happens finishing the level becomes a race against time that really starts to test your platforming skills.

During the different levels, Shu comes across other villagers who must be rescued. They are found in pairs and grab hands with Shu to be led to safety. Like Shu can glide, each villager also has their own special ability. When you meet each new villager there is a tiny picture that appears in an attempt to show you what their abilities are.

Watch the Shu launch trailer below:

These pictures aren’t always clear to understand at first but a little trial and error is all that’s needed. The new abilities make getting around easier but as the levels change to accomodate them they also increase the challenge on offer. The villager abilities include wall-jumping, dashing, walking on water, opening and closing flowers and even slowing down time.

Remembering what each villager is capable of is essential for beating each level but does cause some frustrating deaths when you forget. The game eventually brings everything together for a fantastic and challenging finale.

Despite being difficult in parts, Shu is actually still a fairly easy game to play through thanks to a generous checkpoint system. Shu starts each level with 5 lives and each checkpoint refills them. If you run out of lives then it’s Game Over and you need to restart the level. Once you’ve learnt the levels then are just a few minutes long. Most players should expect to beat the main story in a couple of hours.

Check out some screenshots from Shu in our gallery below:

Beating each level unlocks the ability to run it again in a speedrun mode. Here everything is the same apart from a stopwatch to time your run. Times are posted on the global leaderboards and if you want to be near the top then you need to practice until you can make error-free runs. The leaderboards will keep me coming back to the game and Coatsink have already announced plans to run Time Trial competitions.

Completionists are also catered for as levels are littered with butterflies and other collectibles. Finding all of these will take many playthroughs of each level. A nice touch is that the game remembers those that you’ve found before so there is no need to get every single one on a run.

Shu is a wonderful platformer that looks absolutely stunning. It’s a joy to play and the mix of abilities keeps things fresh throughout the story. Players who like to collect items or those who play to compete will find a lot to like here. A few more levels would have been nice but overall Shu is a game that all platformer fans should definitely pick up.

Shu was reviewed using a digital code supplied by Coatsink.