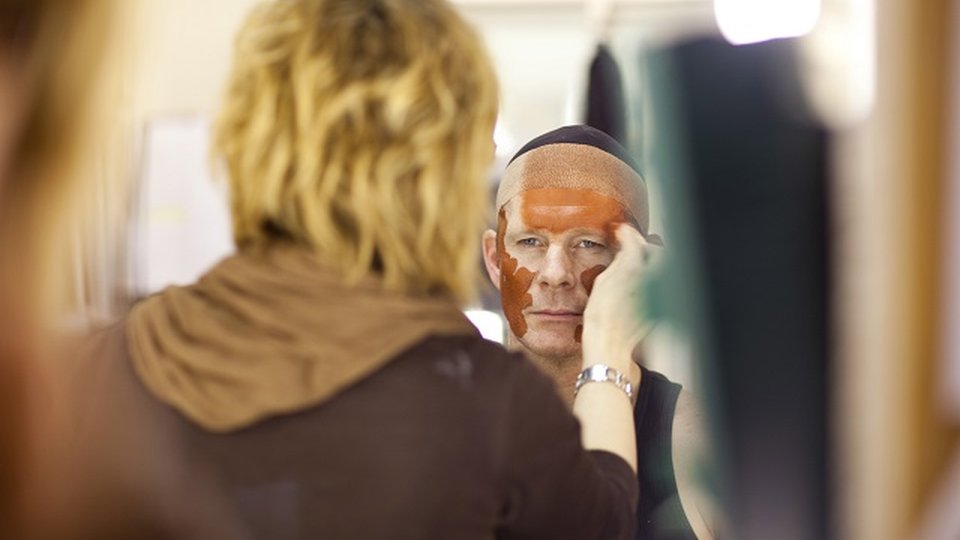 Taking a peek behind the curtain of Disney’s The Lion King at the Lyceum Theatre is like entering a safari-themed Shang-Gri-La.

Racks of intricately carved and painted face masks – ranging from lions to hyenas – compete with hand-painted silk costumes, shiny feathers and mechanical animals. ‘Bertha’, a gigantic model elephant, is discreetly suspended overhead until her time comes to pound the stage.

Corridors are narrow, and space is limited, yet 50 performers and 100 backstage crew members whizz through these pathways night after night to deliver the West End’s best-selling stage production. The belly of the theatre is as powerful as any dragon’s, only it breathes colour, emotion, excitement and joy.

It was just before Christmas, in 1999, when I first saw the stage adaptation of The Lion King in London. Based on the hit animated movie of the same name, the musical launched only eight weeks earlier and was a runaway success. Seventeen years later, I can confirm that nothing has changed.

If anything, The Lion King seems to gain more appeal with age, with new faces and voices adding further magic to an already enchanting production. The award-winning show is now the West End’s sixth longest-running musical of all time.

Set in Africa, this tale of Simba – a lion cub who must take his place in the Circle of Life to become King of the Pride lands – is crammed with action, adventure, wonder and humour. Director Julie Taymor leads a gifted production team to combine puppetry, masks and movement with 15 musical numbers (in both African and English), to bring to life the beauty of the continent and its majestic animals.

Slick, mesmerising and genuinely awe-inspiring, we can expect The Lion King to be ruling London’s West End for many more years to come. Every moment of the show is a visual extravaganza – on stage and behind the curtain. You can explore both through our image gallery and enjoy a new look at one of the UK’s best loved musicals.

The Lion King is showing at Lyceum Theatre in London. It’s written by Roger Allers and Irene Mecchi for Disney Theatrical Productions and directed by Julie Taymor.

Tickets are currently on sale until Sunday 26th February 2017 for individuals and 4th June 2017 for Groups.

Take a look behind-the-scenes and see the magic on stage with our gallery:

In this article:The Lion King