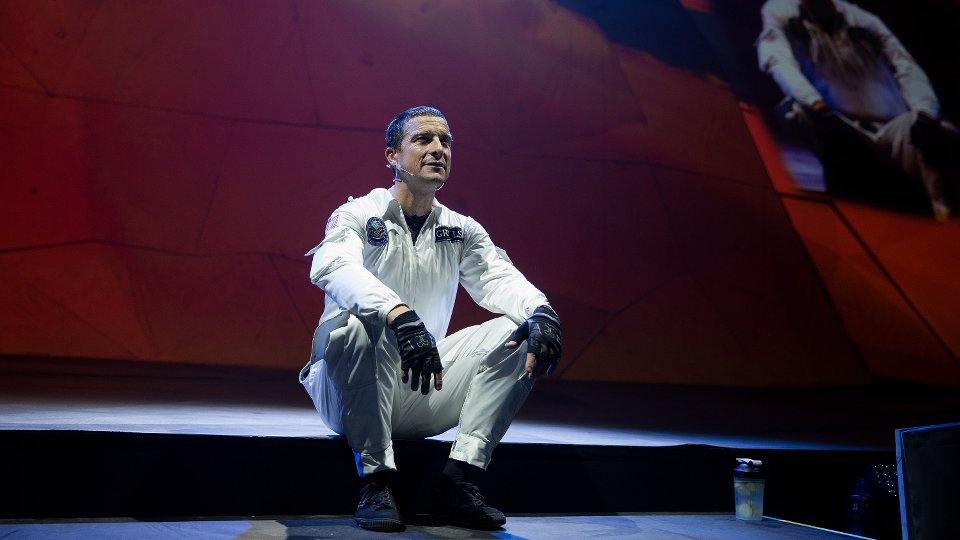 We were invited to the dress rehearsal of Bear Grylls’ new show – Endeavour, which is about to go on a UK and Ireland tour, starting tonight. Ever since being introduced to his shows by a friend many years ago, I have been the biggest fan of Bear Grylls and I love his television shows. His need to explore and to have thrilling adventures captivates me. He dares to take adventures in the most extreme and dangerous landscapes in the world and shows us what incredible risks are at stake. Fear never keeps Bear away. He has shown us what to do if we found ourselves in the most extreme of settings and how to come out of those and survive (I’m not planning a trip to the middle of the Sahara, or a trek across the Antarctic anytime soon, but you know, if I was, I would now have some idea of how to get myself out of one of those terrible situations).

When we heard about his new show, we were pretty excited. It promised to take us on a journey through the most harsh and unforgiving landscapes. The show covers Antarctica, the ocean, the Amazon jungle, Everest and outer space. Unfortunately for us, the show seems to be more aimed at children. It’s unfortunate for adults, as the adults that love his shows I feel would be disappointed by the show. The show doesn’t really take you anywhere or give you any new information that you didn’t already know. The survival skills shown (with the help of some children picked out from the audience) are very much aimed at children (the tasks seemed too easy).

Those that were hoping for a more in-depth show and to have a wow and shock factor (like his television shows provide) will be left feeling flat. There are some gory photographs that appear sometimes and some wonderful stories about Everest, but on the whole we felt that the show needs so much more work. There were too many parts of the show where we thought: hmm, I’m not sure why this is being talked about (Apollo 13, for example). The ocean and Everest stories should and could be expanded upon, as they were very interesting. Stating that we only know 99.99% of what happens in the ocean is mind boggling and this should definitely have been expanded on to give us more clarity, rather than just spouting out facts.

The children in the audience seemed to love the show and they seemed to love the pyrotechnics. For the adults, it got rather boring to watch Bear clip and unclip himself out of the harness to ‘fly’ around the stage, repeatedly throughout the show. We weren’t really sure what the show was going for by doing so much of this. The best parts of the show are the ones in which Bear is true to himself and tells real stories of survival. I feel that the show has too much, dare I say it – budget moments, and it was rather self-indulgent (sorry Bear). The show is nice, but definitely not ground breaking. The show ends in a rather cliché way. If you have children that love to explore, they will enjoy the show and may even be inspired by it. For adults hoping for something in depth, then this is not the Bear show for you.

The UK/Ireland dates for Endeavour are as below: