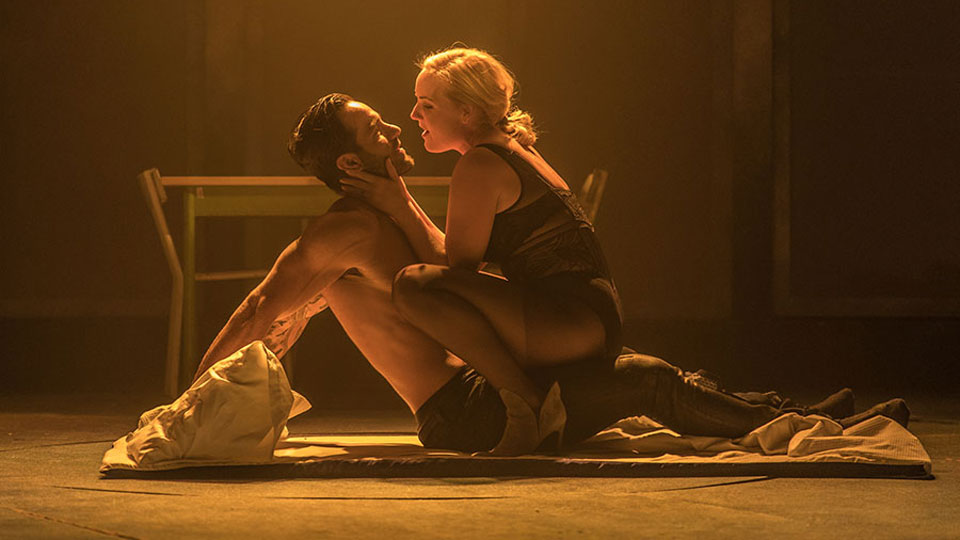 Julia Jordan and Juliana Nash’s effective, but flawed, Murder Ballad – a chamber musical with a rock edge – gets its UK premiere at London’s Arts Festival.

The one act, sung-through production opens with young New Yorker Sara and her bad boy lover Tom alternately fighting and kissing. The tempestuous couple go their separate ways and Sara sets up home with good guy Michael. But, becoming bored of the school run and a comfortable but lustless marriage, Sara reignites her affair with Tom which, as the title suggests, doesn’t end well.

The contained, slight story is both refreshing in its honesty and simplicity, but also criminally under baked. The narrative is pacy and compelling but doesn’t give time for any of the characters to breathe and develop, meaning that the audience finds it hard to care. Thankfully the cast makes up for the book’s shortcomings.

West End darling Kerry Ellis is in fine voice as Sara and pitch perfect for the dramatic rock/pop tracks. She also manages to add depth to her one dimensional character and excels in the more dramatic moments – something she’s obviously far more comfortable with than the awkward sexual scenes. But what Ellis lacks in passion, Ramin Karimloo more than makes up for.

A tightly bound ball of sexual chemistry, Karimloo has an animalistic presence on stage and makes it easy to see why Sara is spellbound by his charms. Of course, it helps that he spends a healthy chunk of the show sans shirt.

Norman Bowman has the least to work with as Sara’s neglected husband but does elicit sympathy as the nice guy done wrong.

Victoria Hamilton-Barritt is the lynchpin of the show as the narrator. Think of her as the narrator in Joseph and the Amazing Technicolour Dreamcoat – just with a permanently-arched eyebrow, sardonic smile and 40-a-day cigarette habit. She slinks around the stage with a menacing grace and her unique vocal stylings add texture and character to the score.

Unlike anything else in the West End, Murder Ballad is an intriguing outing which has plenty going for it – but it’s unlikely to make a killing.