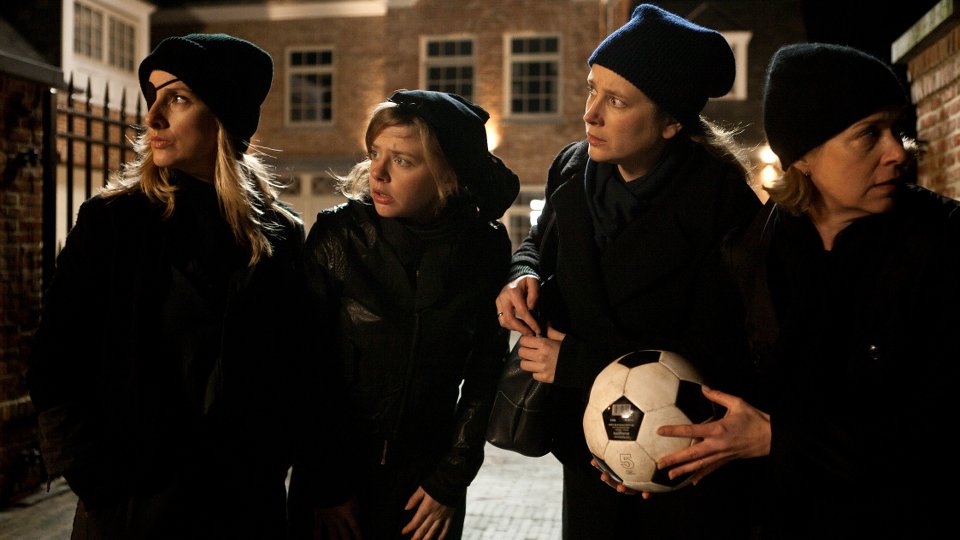 Credit: Nordic Nor & Beyond

Belgian dark comedy The Out-Laws has been airing on More4 here in the UK and it’s the latest import to create a buzz. The series focuses on the five Goethal sisters who are united in their grief after losing their parents. Goedele (Inge Paulussen) marries Jean Claude (Dirk Roofthooft) much to the disapproval of their sisters. Jean Claude spends his time tormenting the people around him forcing sisters Eva (Barbara Sarafian), Birgit (Ruth Becquart), Veerle (Kristine Van Pellicom) and Bekka (Maaike Neuville) to hatch a plan to kill him.

The Out-Laws opens with Jean Claude’s funeral so you know from the off that he’s dead. What you don’t know is how he died and each episode is split into two narratives; the past and the present. In the present the sisters pull together when an insurance company refuses to pay out without investigating Jean Claude’s death. The sisters become paranoid that they will be found out but what they don’t know is that the insurance company will go under if they pay out on Jean Claude’s death.

The past narrative gives an insight into Jean Claude’s life and his relationship with each of his sister-in-laws. He had many secrets, some of which he shared with the sisters but they kept from each other. Jean Claude is quickly painted as an awful man so you root for the sisters to get away with the murder from the outset. There is a scene that take place over New Year that sees Jean Claude picking apart each of the women and that sets the scene for his impending murder.

Throughout the series each of the sisters attempts to kill Jean Claude, sometimes teaming up together, but he proves a lot harder to kill than they expected. It soon becomes apparent that they may not be the only people that want him dead and his list of enemies proves much longer than his list of friends.

The strong performances of the five central women is what makes The Out-Laws such delicious fun. The actresses form a believable bond as sisters and they interact with a natural chemistry that helps you get to know them. Each of the actresses plays their part perfectly with Ruth Becquart standing out former crossbow champion Birgit who now wears an eyepatch following an accident.

The Out-Laws has been compared to Desperate Housewives. It’s clear to see why but the comparison isn’t all that accurate. The Out-Laws is much darker than Desperate Housewives ever was and it’s certainly a lot more adult in its themes. The inevitable US remake is on the way so we recommend you start with the original series, which will obviously be far better than the remake, and crack out the wine while you delve into a dark and funny world filled with twists and turns.

Advertisement. Scroll to continue reading.
In this article:Nordic Noir & Beyond, The Out-Laws