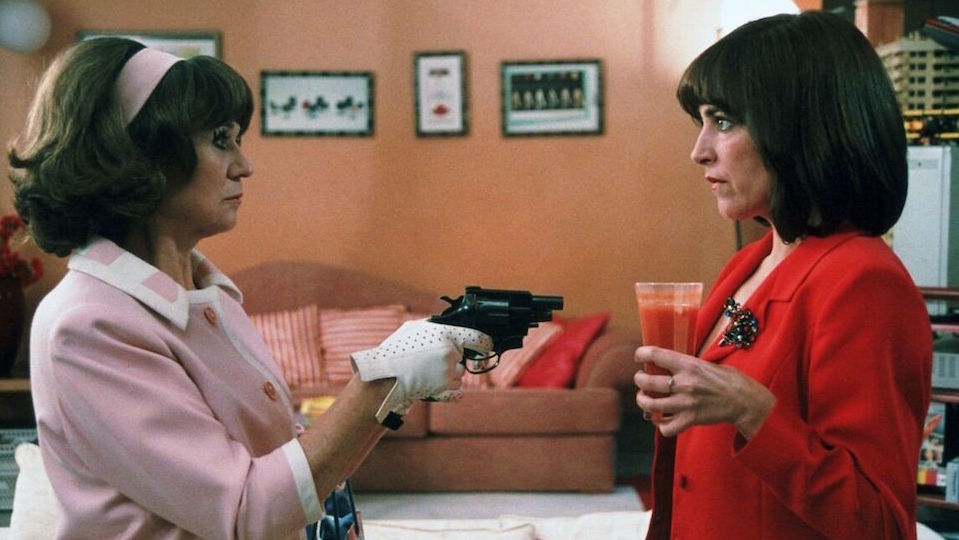 This collection of early Pedro Almodóvar films is a collector’s item in the most literal sense. Showcasing the evolution of the artist he would become, the six films in this set are unlikely to convert anyone to the sacrilegious church of Almodóvar, or garner him a new generation of ardent admirers. They lack the accessibility of his award-winning crossover hits from the late 90s and early 00s. However, for the loyal and longstanding fans of the great auteur, this handsome box set, available on blu-ray for the first time, will make a wonderful addition to the collection.

What do we talk about, when we talk about Pedro Almodóvar? Films with strong heroines, fluid sexuality, post-modern melodrama, colourful characters and high-camp frivolity would surely feature in any discussion of his art. Likewise, the Catholic Church, modern and traditional music, lip-synching to old songs, writing love letters, making desperate phone calls, the vibrant red and green aesthetic, suicide attempts, scenes of people vomiting, and the desire to leave the city and return to the pueblo.

These are the signifiers of Almodóvar. His thumbprints in the clay. In his mid-career masterpieces, at the peak of his filmmaking prowess he skilfully reshaped these key themes, motifs, and stylistic idiosyncrasies time and time again to remarkable success and acclaim. In the films included in this box set, starting with 1983’s Dark Habits, and finishing with 1995’s The Flower of My Secret, we can see the birth of his sumptuous cinematic style and thematic concerns. I highly recommend that you watch the films in order.

Dark Habits is one of Almodóvar’s earliest features, but within the opening few minutes, the themes and aesthetics immediately denote who we are dealing with. The story follows Yolanda (Cristina Sánchez Pascual), a glamorous nightclub singer, battling a heroin addiction. Her boyfriend kills himself, making it look as if she murdered him. She goes on the run, and finds refuge at a convent, only to discover the nuns are as wild and depraved as the outside world has become. They do drugs, have sex, write erotic novels under nom de plumes, and one of them even keeps a pet tiger. This is Almodóvar at his most un-subtle, taking broad comic swipes at post-Franco Spain, and the role of the Catholic Church. Sure it’s a bit like a debauched Spanish version of Sister Act (which is no bad thing), but this is an important film in the development of Almodóvar’s career, as he began taking small steps away from the underground art-house, and found his muse in the plight of women.

One of the nuns in Dark Habits is played by the wonderful Spanish actress Carmen Maura, who goes on to appear in a number of this films in this collection. As Gloria in What Have I Done to Deserve This?, Maura is the quintessential “Almodóvarian chica” – a run-down, hard-working mother, who works as a cleaning lady, but guzzles Pro-Plus and sniffs glue in order to get through another day with her demanding family. Set in the housing projects of Madrid, What Have I Done to Deserves This? is a chaotic film, buzzing with colour and amphetamines, and blessed with an astonishing array of characters. There’s Gloria’s pig of a husband (Angel de Andres-Lopez) who gets embroiled in a scam to forge Hitler’s diaries. Then there’s her mother in law, played with delicious gusto by Chus Lampreave, who just wants to get the hell out of Madrid and go back to her village. Her neighbour is a prostitute, visited by a succession of punters, including a hilarious exhibitionist. One of Gloria’s sons is a heroin dealer, and she lets her other son be adopted by a disgusting, lecherous pervert dentist, in what is surely one of the most outrageous plot developments that you will ever see. This film takes completely unexpected turns, is utterly bizarre and farcical, and more melodramatic than a lurid soap opera. Quite simply, it is wonderful.

A significant change of tone for the next film in the set, though it is no less wild and overly-dramatic. Law of Desire tackles love and obsession, through the prism of an erotic thriller. Pablo (Eusebio Poncela) is a director of acclaimed homoerotic films. He is wealthy, handsome, enjoys partying, and has a younger lover named Juan. His life seems pretty great, until Juan leaves Madrid to live in the country. Into the vacuum left by Juan’s absence, comes Antonio (Antonio Banderas) a young fan of Pablo’s movies, who sleeps with him, and then becomes dangerously obsessed. He is jealous that Pablo was in love with Juan and not him, and goes to extraordinary and psychotic lengths to take Juan’s place.

This may all seem a bit pedestrian and run of the mill for Almodóvar, but rest assured, Carmen Maura is also in the film, playing Pablo’s sister Tina, who used to be his brother. She is a lesbian, and is raising her daughter alone due to an absent mother, who ironically is played by the famous transsexual Bibiana Fernández, also known as Bibi Andersen. Now it feels like an Almodóvar film. The tone and subject matter may be veering into more serious territory, but the arch and overacted content ensure it remains firmly within the director’s oeuvre.

His major international breakthrough came in 1988, with Women on the Verge of a Nervous Breakdown, earning Almodóvar his first Academy Award nomination. A complex brew of scandalous affairs, terrorism and gazpacho, it is a raucous comedy drama and a turning point in his career. Like Woody Allen’s “early funny ones” peaking with Love and Death, before becoming a serious artist with Annie Hall, Manhattan, and the rest, Women on the Verge of Nervous Breakdown, sees Almodóvar’s aesthetic, thematic and stylistic concerns come to a peak. The colours, the acting, the music, the frenetic plot, the sublime talents of Carmen Maura and Julieta Serrano. All of these things we have seen before in his films, but more focused and vivid than ever.

The film follows Pepa (Maura), an actress and voice over artist, who has been having a long-term affair with Ivan, a married man. They worked together on the Spanish dub of Johnny Guitar starring Joan Crawford – a definite Almodóvar chica. Ivan is leaving her, and she is not taking it well. She plans to commit suicide with a spiked gazpacho. When that doesn’t go to plan, she decides to leave her penthouse apartment and let it to someone else. This is complicated by the fact that she keeps farm animals on her terrace. The first people to come and view the apartment, are Ivan’s son Carlos (Antonio Banderas) and his fiancé Marisa. Marisa unknowingly takes a sip of the gazpacho and falls unconscious, allowing Carlos the opportunity to make a move on Pepa’s friend Candela. Candela is staying at Pepa’s because she is on the run from the police. If that weren’t enough, there is also the scorned wife Lucia – a vision of old Hollywood madness, with her painted on eyelashes. That it comes in under 90 minutes is a miracle. This is bold, fast-paced, emotional, and hilarious, and would be the blueprint for the huge successes that lay ahead.

However, there was still time for a misstep, and no box set would be complete without one. Kika is something of a departure; a thriller of such horrendously dark subject matter, but undercut by a playful and upbeat tone. Kika (Veronica Forqué) is a make up artist. She is eternally optimistic and cheerful about everything. She is dating a photographer called Ramon, whilst also sleeping with his father, Nicholas (Peter Coyote). Ramon has serious “mummy” issues following the suicide of his mother, which is strongly implied as being a murder at the hands of Nicholas. Nicholas is an American writer who has started working on a TV show called “Today’s Worst”, which is hosted by Andrea Scarface (Victoria Abril), resplendent in extraordinary Jean-Paul Gaultier outfits. The show is sensational and sleazy tabloid trash, and she scours the city in her bizarre biker outfit, which makes her look like a wannabe superhero, but is actually a portable TV studio – with a camera on the helmet, and lights over her breasts.

It sounds like a reasonably throwaway piece of work, and it would be, were it not for the incredibly problematic scene of Kika being raped by an escaped prisoner about half way through the film. It is not only one of the most misjudged sequences of sexual assault, it is perhaps one of the most horrible sequences I have ever seen. Not for any graphic content, but for the gleefully comic, almost farcical tone.

Can such a scene be forgiven and re-evaluated just because it was directed by a world-renowned auteur, and one of your favourite filmmakers? I’m afraid not. Anything good about this film is permanently stained by that awful and sickening sequence. A sequence further replayed on television as Andrea Scarface caught the whole thing on camera. The film attempts to satire the voyeuristic tendencies of tabloid sensationalism. There are overt references to Peeping Tom and The Prowler, adding to the stalker vibe. However, it’s all undone by the nastiness meted out on Kika.

Almodóvar was back on more solid ground with 1995’s The Flower of My Secret, a more mature and thoughtful rendering of the themes that have pervaded through his earlier work. It isn’t the best film in this collection, but it is certainly the most accessible.

Leo (Marisa Paredes) writes hugely successful romance novels under the name Amanda Gris. In reality however, her love life is a mess. Her army officer husband is stationed away from home, and when he returns he is cold and distant. Leo is a burgeoning alcoholic, and the troubles at home are affecting her work. She no longer feels capable of writing romance, and has started writing noir instead, something her publishers are horrified by. “Why change when you’re a bestseller?”

This line could well be a reference to Almodóvar’s move away from the bawdy and outrageous comedies that made him successful. This was his Annie Hall moment, as he matured beyond his earlier work and ventured into new and exciting territory. The next seven films he made after this were the most successful of his career.

As well as the films, there are also brand new features on each disc, including cast and crew interviews and introductions by film critic José Arroyo. Most of these films are already available in previously released collections or standalone DVDs, however the new features, and newly restored HD picture quality make this a very worthwhile purchase.

Advertisement. Scroll to continue reading.
In this article:Antonio Banderas, Carmen Maura, Dark Habits, Kika, Law of Desire, Pedro Almodóvar, The Flower of My Secret, What Have I Done to Deserve This?, Women on the Verge of a Nervous Breakdown