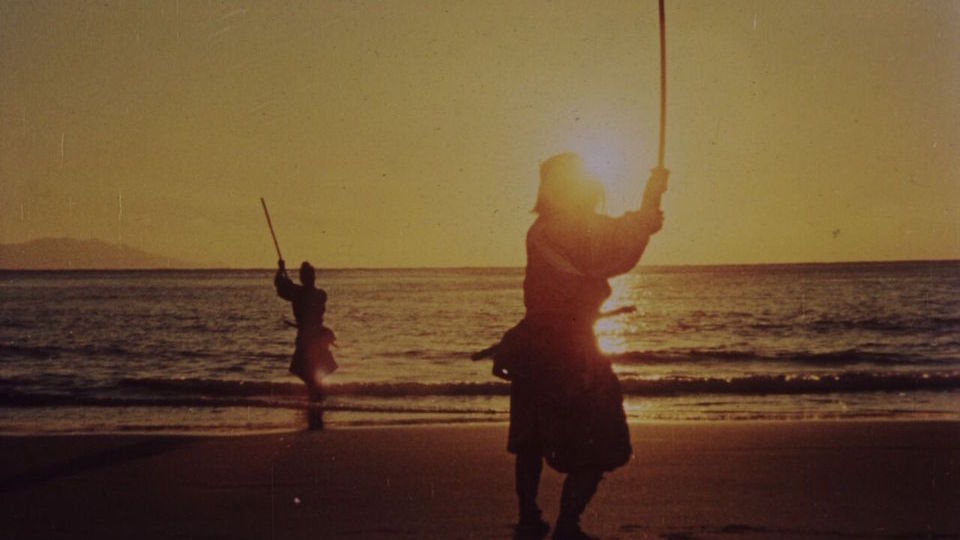 Eiji Yoshikawa’s epic novel, Musashi, about the exploits of the legendary swordsman Musashi Miyamoto has often been described as Japan’s Gone With the Wind. When you see Hiroshi Inagaki’s acclaimed adaptation, The Samurai Trilogy, the comparison certainly comes into focus.

Produced by the Toho studios (the creators of Godzilla), the Samurai Trilogy is a sweeping tale of love and betrayal and the clash of katana blades. Starring the legendary Toshirô Mifune as Takezo, the headstrong and unruly young warrior, who over the course of these films becomes the wise and noble ronin Musashi Miyamoto.

The first film in the trilogy, Samurai I: Musashi Miyamoto, portrays Takezo as a restless young man, desperate to prove himself in battle. Together with his friend Matahachi they seek fame and glory at the Battle of Sekigahara. Wounded, and with their army defeated, the two friends seek refuge with two women, who are being tormented by bandits. The women manipulate Takezo into fighting the bandits, whilst Matahachi escorts them safely to Kyoto. Takezo thinks he has been abandoned and tries to return home, only to face more fights, as he is no longer welcome. He has no family, and is despised by the villagers.

He is eventually captured by a Buddhist priest who forces him to change his ways. He locks him in a room filled with philosophical texts, encouraging him to learn and use his mind, and not just his brute strength. When he emerges some years later, he is a changed man, taking on the name Musashi Miyamoto, he sets off to become a true ronin Samurai.

The second film, Samurai II: Duel at Ichijoji Temple sees him take on a number of duels, as his renowned exploits as a swordsman mean more and more warriors wish to challenge him. The final film in the trilogy, Samurai III: Duel at Ganryu Island, finds Musashi trying to live a quiet life as a farmer, until he is drawn into one final battle against the most dangerous opponent he has ever faced.

Threaded between the action is a complicated and achingly romantic love story, spanning all three films, as Musashi finds himself the subject of two women’s affections. Torn between a quiet life with the woman he loves, and the life of a samurai, devoted to perfecting his artistry with a sword, he chooses the path of the warrior. His scenes with Otsu (Kaoru Yachigusa), the woman so painfully devoted to him are truly heartbreaking.

Beautifully shot in bold and vibrant colours, often on sound stages rather than locations, the films have an almost Hollywood glow to them. They look fantastic, and the restoration by Criterion is sublime. The main additional feature across the two discs in this set is an in depth interview with translator and historian William Scott Wilson, and expert on the real life Musashi Miyamoto.

In this article:Criterion Collection, The Samurai Trilogy, Toshiro Mifune