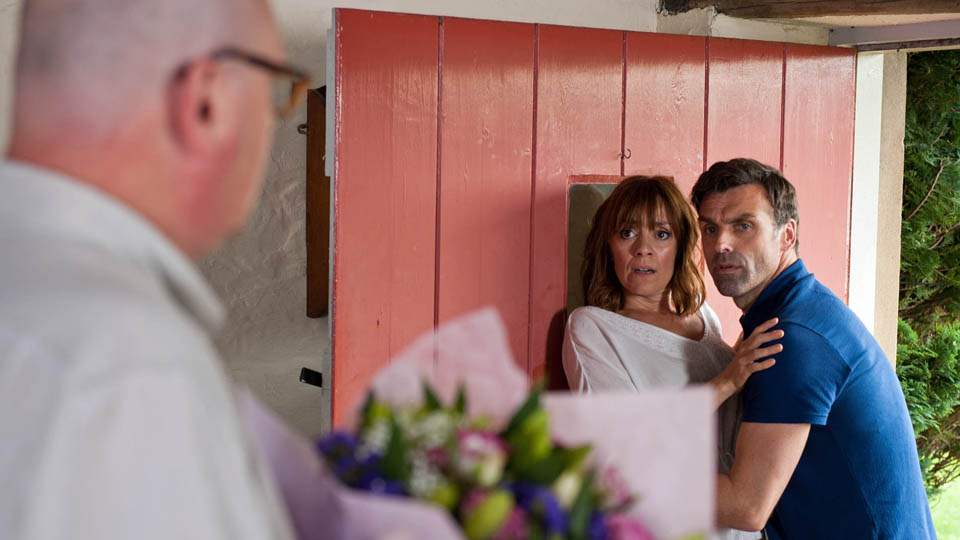 Welcome to our weekly look ahead to what’s happening in Emmerdale.  Paddy is back, Laurel goes into labour and the police talk to Lachlan.

Rhona is letting the green eyed monster get the better of her and when Carly texts Pierce, she’s tempted to read the message but stops herself.  She tells Pierce what she was going to do and tears up, saying she can’t be cheated on again.  He reassures her and tells her he loves her.

Paddy makes a surprise return from Germany to find the house empty and ends up stumbling in on Marlon and Carly partially dressed.  Marlon is horrified to realise that Paddy doesn’t know about Rhona and Pierce.  He’s about to tell him, when April comes in with a grazed knee and Paddy makes his exit before Marlon has the chance.

He is flabbergasted to find Pierce and Rhona together and is determined to show Rhona that Pierce isn’t the man she thinks he is.  He is soon badgering Marlon about how friendly he is with Pierce too and is hurt when Marlon says he needs to be for the sake of Leo.

Later, as Rhona tells Paddy they need to move on he leans in to try and kiss her but she pushes him away and he’s gutted to realise that she means it.  In the Woolpack, he apologises to Pierce for kissing Rhona; how will Pierce react?

Lachlan gets a visit from the police

Lachlan and Liv are still secret friends and playing computer games but she runs out when Lawrence and Chrissie return.  Meanwhile, Bernice is determined to clear Andy’s name and wants to put the pressure on Chrissie, but Robert tells her they need to go slow and be clever.  However, Bernice may have her own plan as in the Salon, she insists Chrissie have some wine with her.  Unbeknownst to Chrissie, she’s recording their conversation, but Bernice’s constant questions about Andy wear thin and Chrissie gets annoyed.  A desperate Bernice picks up the clippers;  what is she going to do?

Lawrence is concerned by Lachlan and Liv’s friendship and suggests they play cricket so he can keep an eye on them, but he suddenly keels over in pain midway through a game.  What’s wrong with him?

Lachlan later gets a message from Robert pretending to be his dad and in his reply he suggests that he’s about to confess to something, leading Robert to get excited.  When the police arrive to talk to Lachlan, he struggles to hide his panic and hurls his laptop with the messages from his ‘dad’.   When he realises it was Robert pretending to be his dad he attacks him and Robert does nothing to dampen his temper.

Chrissie warns Robert to stay away and he’s outraged at the threat.  Lachlan takes his rage out on Liv, leaving her hurt.  It seems it’s war on the Whites!

Laurel asks Rishi if she can work more weeks before going on maternity, then lies to Kerry that Rishi is forcing her to stay on.  Kerry gets a bee in her bonnet and pushes Ashley to confront Rishi, but Laurel intervenes and explains it was her decision.  Kerry offers herself as a temporary replacement for Laurel at the factory and is pleased when he agrees.

That joy turns to panic when she thinks she can’t do the rota and worries she’s not cut out for management.  She tries to ask Laurel for help but is stopped in her tracks when Laurel starts having labour pains.  At the hospital Laurel is told it’s a false alarm and she is sent home.  However, while Ashley is upstairs running her a bath, her waters break and he’s shocked to find her in labour.  Is he prepared to deliver the baby at home?

Dan is still cheesed off with Kerry for not showing him more support as he heads off to his first volunteer shift at the care home.  Things don’t go well when a patient dies on him and he’s sent home early, but ends up turning to Nicola for comfort.  He leans in for a kiss, but is someone watching?

Charity is pleased that she’s got Cain to come with her to a  brewery convention, but he’s just received his divorce papers and is none too happy.  He gets even more annoyed when Moira urges him to sign them.  Charity is determined not to lose him back to Moira so sends a sneaky text from his phone before seducing him.  Moira shows up and catches the pair kissing, leaving Cain furious that she’s set him up.

Holly begs Megan for another chance at being the photographer for Take A Vow, but Megan refuses.  Later, she feels a bang of guilt, will she change her mind?

At the morgue, Lisa relents and let’s Zak come with her to identify Belle’s body.  Bailey anxiously awaits their return to confirm whether it was or wasn’t Belle.  Could this be the last we see of Belle or is the body someone else?