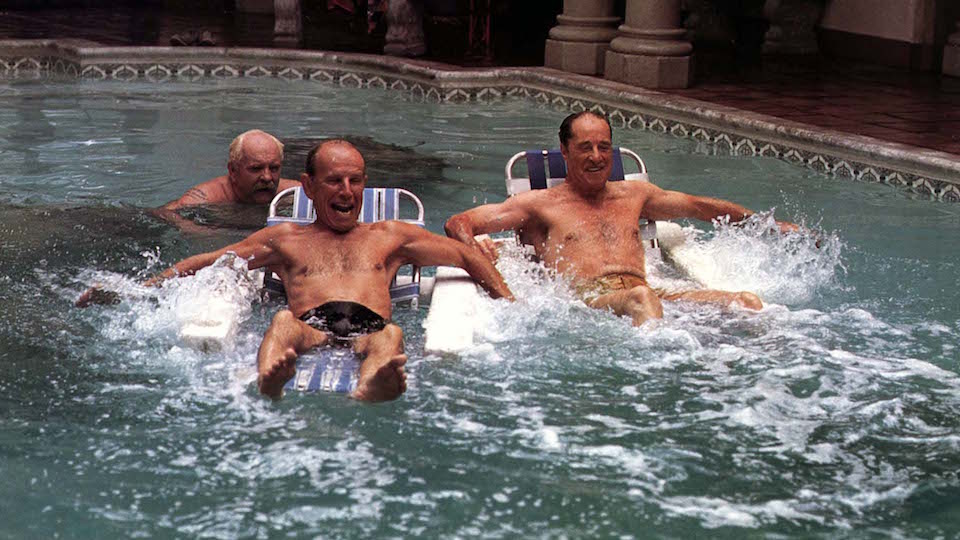 If your movie memory doesn’t stretch beyond the mid-90s, you might not believe this, but movie aliens weren’t always trying to destroy and enslave the planet. Quite the opposite in fact. Before Marvel’s Avengers, War of the Worlds (the remake), and Independence Day, movie aliens were often rather nice.

Case in point, Ron Howard’s enduringly popular, fountain-of-youth movie, Cocoon, which is being re-released for it’s 30th anniversary (despite being released 31 years ago). There’s no invading, no body snatching, and no famous landmarks being blown to smithereens. Instead we have a gentle tale of four mysterious strangers on an expedition to recover cocoons (containing their alien comrades) off the coast of Florida. They store the cocoons in a private swimming pool which neighbours a retirement community, without knowing that three of the crafty codgers from next door keep sneaking in for a swim.

By sharing the water with the extra-terrestrial cocoons, the old men are rejuvenated in both body and spirit. Their ailments are cured, their lust for life (and the ladies) is restored, and in one particularly toe-curling montage, Don Ameche (who won an Oscar for this film) breakdances in a St. Petersburg nightclub.

The film’s best bits are when the old boys are larking about and getting into scrapes, but Howard too often lets the tone lurch into cynical mawkishness. There is also a completely redundant subplot involving Steve Gutenberg’s down-on-his-luck boat captain, that should have been jettisoned during the second draft. The Stonecutters have a lot to answer for.

Cocoon is an incredibly safe film, cocooned as it is in some of the safest hands Hollywood has to offer. Produced by David Brown and Richard D. Zanuck, two of the most experienced producers in the business – directed by Ron Howard, still only a young man, but already a very safe bet – and starring the likes of Don Ameche, Wilford Brimley, Brian Dennehy, Maureen Stapleton and Jessica Tandy. This is timeless Hollywood production line fare. It was old fashioned in 1985, and it hasn’t aged a day. You’d think it had been swimming in the fountain of youth.

The disc comes loaded with extras, unfortunately they have all been dragged and dropped from a previous release. There is a feature length commentary from Ron Howard, and a five-part behind the scenes documentary. Then there is a huge collection of trailers and TV spots, as well as a trailer for the sequel. The blu-ray transfer is very good, and the underwater sequences look great. However, as is the case with a lot of special effects movies made in the pre HD era, not everything benefits from a sharper image.