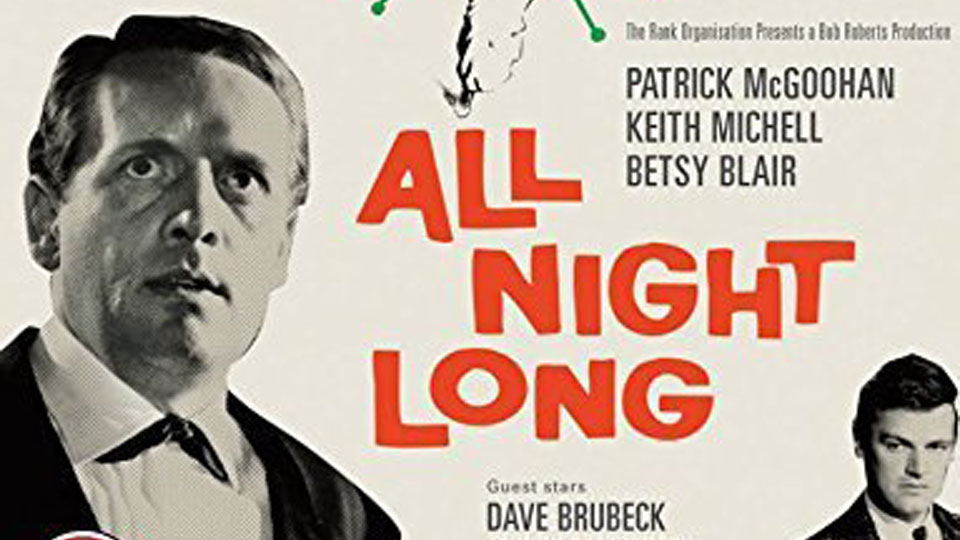 All Night Long is a film from the Rank Organisation which hit cinemas in 1962. Loosely based on Shakespeare’s Othello, it sees a wealthy man host a party at his house, only for bickering between the musicians leading to a false charge of adultery and the fury of sexual jealousy to erupt.

It stars many of the leading names of the day, including Richard Attenborough (Brighton Rock) as the genial host, Patrick McGoohan (the highest-paid star on British TV at the time for Danger Man) as the Iago character, and Keith Michell (later Henry VIII on television) as the Cassio character. Paul Harris plays Aurelius Rex, the character based on Othello, whilst Marti Stevens plays his faithful but wrongly-accused wife.

If you love jazz music of the era, you’ll love All Night Long. If you’re indifferent to jazz and prefer a good story, you’ll likely be indifferent to the movie. It’s not an easy task to condense Othello to ninety minutes, and harder still if the story takes a back seat to showcasing great musicians. The moment Richard Attenborough cheerily welcomes Dave Brubeck (playing himself) to the party is, there’s no two ways about it, awkward and embarrassing. Until it becomes clear that the vague outline of Othello is being pursued, it’s hard to latch on to much discernible plot, and despite its short running time, All Night Long meanders for much of its duration. Despite Basil Dearden’s best efforts behind the camera, All Night Long just isn’t as cool as it tries to be or thinks it is.

There are plenty of points in the movie’s favour. The few settings – with 90% of the action taking place in one large room – lends it an intensity and a theatrical quality, as does the almost real-time development over the course of a single evening. Nobody could ever do icy and villainous charm quite as well as Patrick McGoohan, and he’s certainly the stand-out performer here, and we even get to see him play the drums. There’s a guest performance from the always-entertaining Harry Towb, and the musical soundtrack is great.

Less positively, Paul Harris doesn’t quite have the emotional intensity required to pull off the part of Aurelius Rex, and there are moments of plotting absurdity such as McGoohan’s recording and then manipulating of a private conversation, which is way too convoluted to convince. It’s hard to sympathise with any of the characters, but there’s always the music to fall back on.

This new release of All Night Long looks astonishingly crisp in high-definition, and the sound is sharp too, which is essential for the real selling point of the movie – the jazz suite – to be enjoyed at its best.

All Night Long is released as part of Network’s The British Film collection.