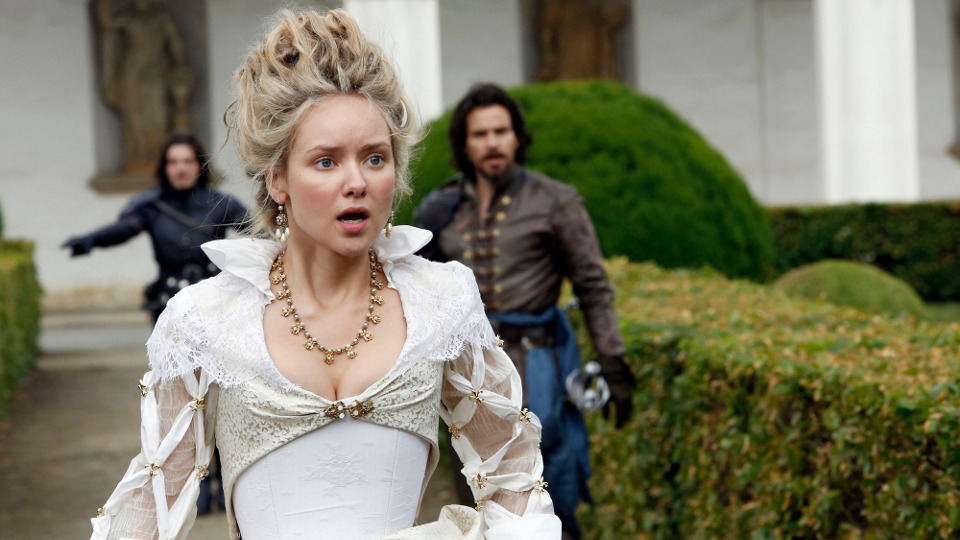 In the fourth episode of The Musketeers, King Louis’ (Ryan Gage) sister, the Queen of England had her diamonds stolen.

She was on her way to Paris to visit her brother to request his assistance in the war. The diamonds were to be sold to help pay for the war. The King immediately called upon the musketeers to track down the thief and recover the diamonds.

While beginning their search for the culprit, Porthos (Howard Charles) spotted a familiar face. It was criminal Emile Bonnaire (James Callis) who they crossed paths with back in season one. When he spotted the musketeers he immediately began to flee but they soon chased him down.

Athos (Tom Burke), Porthos and D’Artagnan (Luke Pasqualino) eventually got Bonnaire to talk. Porthos dangling him from a bridge by his feet really seemed to help.

The diamonds had been sold to three different buyers and Bonnaire was able to help find them. Getting them back was rather easy on the whole. Although a fight broke out at one buyer and Bonnaire ended up with a nasty wound on his back that Porthos had to stitch up.

Later it was revealed that he was working with his wife, Caroline (Sarah Smart). For helping return the diamonds and giving up the money they made, the Queen agreed to pardon them both.

Elsewhere in the episode, Aramis (Santiago Cabrera) bumped into a childhood friend called Pauline (Laura Haddock). They had grown up together as their mother’s had lived and worked in the same brothel.

Pauline had turned her life around and was set to marry a French nobleman called St Pierre. However someone was trying to blackmail her so she called upon Aramis to help her. He worked out who was behind the scheme and threatened him to leave her alone. He refused and Pauline later ended up ruining everything herself by killing the man.

At the end of the episode Feron (Rupert Everett) and Grimaud (Matthew McNulty) met. Feron told Grimaud the secret about the King’s illness. Feron also mentioned that he’s cooking up an audacious plan

The next episode is To Play the King. The musketeers battle to restore order in Paris after Grimaud and Feron stage an ambitious Chatelet breakout, setting free a lunatic with murderous designs on the Louvre. Using one prisoner’s unlikely talents to rob the royal vault, the plotters prepare to make their first move against the king. But ailing Feron is distracted, and his ruthless silencing of an unwelcome visitor could be Grimaud’s undoing. Ambitions collide during the Dauphin’s birthday party, where a kind act by D’Artagnan pushes lovers together and ends in catastrophe.

Tune into BBC One at 8:30pm on Sunday to watch the episode. Preview episode 5 with our gallery below: