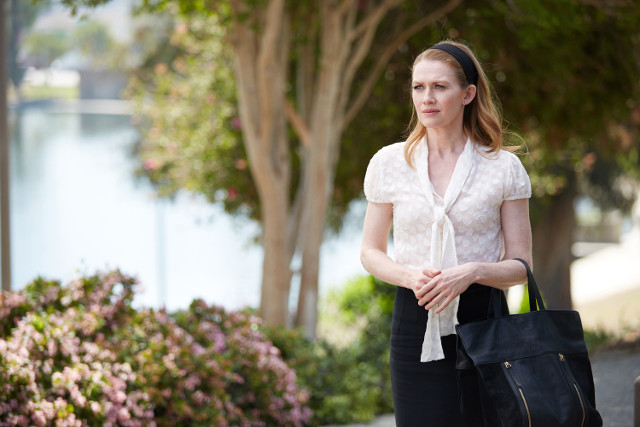 Alice (Mireille Enos) got a taste of Ben’s (Peter Krause) life as a conman by pulling off her own con on the latest episode of The Catch.

After stealing the bracelet from Ben, Alice found herself targeted by other criminals that wanted it for themselves. She was ambushed by Mickey Shive (Kinyumba Mutakabbir) losing the bracelet and putting Ben’s life in danger when Margot’s (Sonya Walger) brother Rhys (John Simm) arrived to collect his debt.

Alice hatched a plan with Ben to tip him off to Mickey’s whereabouts before Dao (Jacky Ido) could get there but it backfired when Rhys killed Mickey, who didn’t have the bracelet. They managed to track it down to Emeric Shive (Kevin Brunner) and used a fake bracelet to hand to Dao while Rhys took the real one.

Elsewhere in the episode Danny (Jay Hayden) investigated the case of Nia Brooks (Samira Wiley) a female army captain targeted with death threats. He got too close to her but eventually uncovered her brother as the culprit.

Also Val (Rose Rollins) let her guard down with Dao and slept with him after he expressed concern that he was being played by someone, Alice let Ben into her bed again, and Rhys killed Felicity (Shivani Ghai) after she told him about Alice.

The next episode of the season is The Ringer. AVI takes on a case involving a missing child with parents embattled in a bitter divorce. Against their better judgment, Ben convinces Margot and Reggie to work a con for their benefactor, and Alice leads Dao into investigating Ben from a different angle.