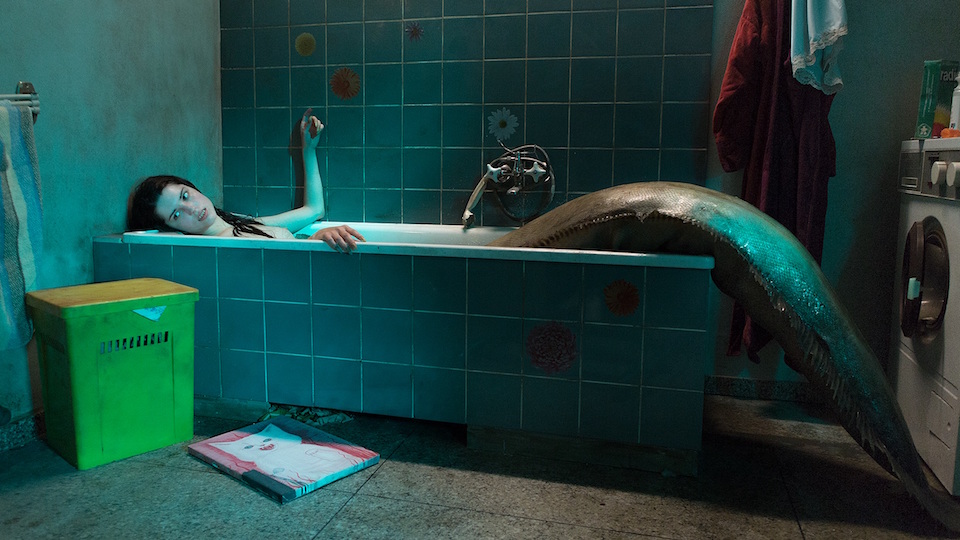 We’re a long way from the breezy fun of Splash in Agnieszka Smoceynska’s tale of seductive teenage mermaids who become singers at a seedy Warsaw cabaret. A sort of horror, fantasy, synth-pop musical hybrid, The Lure is by far the strangest film I’ve seen at this year’s EIFF.

The plot sees the house band of a cabaret club drunkenly singing on the beach one night, when they inadvertently summon two mermaids into the shallows. The two mermaids start singing back their siren song which includes the line “we won’t eat you dear!”

The next thing we know, they have been brought ashore and are dancing in the dressing room whilst the band belt out a cover of Donna Summer’s I Feel Love. Their song must have worked. They are then discovered by the club’s disgusting owner who immediately wants to exploit them for his own gain.

So the girls, known as Golden (Michalina Olszanksa) and Silver (Marta Mazurek) become backing singers and strippers, known as The Lure. Their shows drive the punters wild – singing their siren songs, removing their skimpy outfits, and then splashing themselves with water to transform back into mermaids on the stage. In true burlesque fashion, they cavort in giant champagne coupes. Their scaly eel-like tales slithering over the rim.

Problems start to occur when Golden starts eating men, and Silver finds herself falling in love with Mietek (Jakub Gierszal), the handsome bass player in the band. We are told in a piece of handy exposition that if she gives her love to a human but he chooses someone else, then the mermaid will fade away and dissolve into sea foam. Unless she eats him.

What The Lure lacks in cohesive storytelling and characterisation – and believe me, it really does lack in these areas – it fills in the gaps with full-on avant-garde weirdness and the shimmering, lurid disco aesthetic. I understand that with films like this, it’s all about the unique visuals and freaky premise, and getting from one set piece to another. However, there are fundamental flaws that undermine the stylistic delights.

Firstly, the songs just aren’t that great. The music is like the worst of 80s europop, and the lyrics I fear, were lost in translation. Then there are the characters who are introduced but add nothing to the film. Golden has a sapphic/piscine sexual encounter with a woman who is investigating her murders. It amounts to nothing more than a freaky and titillating set piece.

Then there’s Tryton – another mythical sea creature taking a holiday on the land. He has scars on his head where his horns used to be – he lost one in an accident, and tore the other out himself. Now he’s the front man of a punk band. He encourages the girls to remember what they are and accept their base instincts. But then he disappears from the film as well.

Watching The Lure is a frustrating and thrilling experience. There are images in this film that are truly unique, beautiful and horrifying. The work of director Agnieszka Smoceynska, costume designer Katarzyna Lewinska, production designer Joanna Macha and sound designers Maria Chilarecka and Marcin Lenarczyk cannot be praised enough in terms of the visual and aural feast they have created. Huge praise must also be given to Mazurek and Olszanksa, whose performances are mesmerising.

Unfortunately it is just too haphazard in its structure, with too many non-sequitors and bizarre asides, that ultimately erode the novelty of the premise. I think it will do very well as a midnight movie on the festival circuit, but mainstream audiences will find the whole just a bit too fishy.

In this article:Edinburgh International Film Festival, the lure