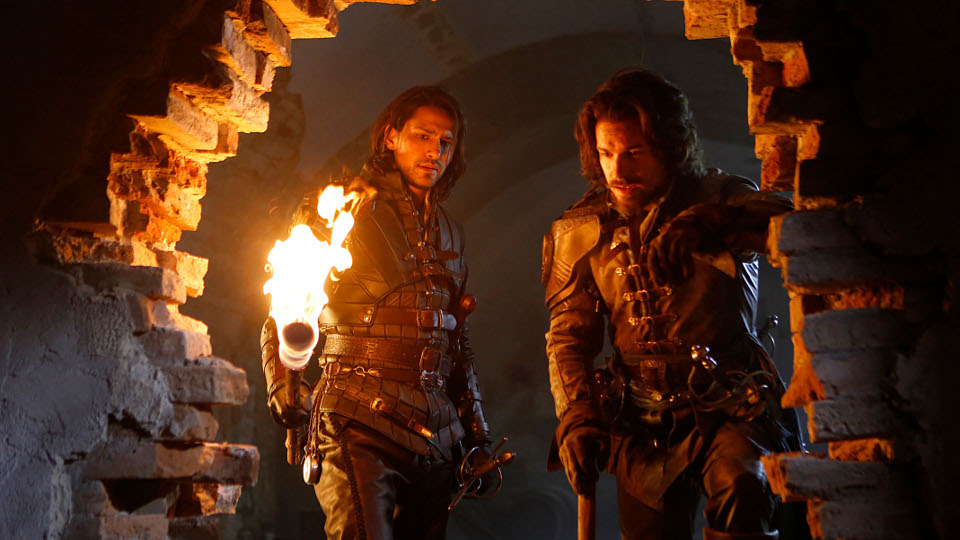 The latest episode of The Musketeers, Lucien Grimaud (Matthew McNulty) and Governor Feron (Rupert Everret) joined forces with the Duke of Beaufort (Oliver Chris). They staged a robbery of the Duke’s grain and framed the refugees for it, their plan was to sell it back to the king at an inflated price.

D’Artagnan (Luke Pasqualino) attempted to help protect the refugees from the Red Guard but landed himself in prison with them. There he made friends with Hubert (Francis Magee) who sadly died in the night.

Athos (Tom Burke), Porthos (Howard Charles) and Aramis (Santiago Cabrera) were training together when they heard the news and rushed to the scene to work out what had gone on. While looking for the missing grain in the refugee camp, Athos came across a refugee girl named Sylvie (Thalissa Teixeira).

The next day D’Artagnan was released and met with Constance (Tamla Kari) who told him they had been working to free the refugees. He later joined up with the other Musketeers and met Sylvie. She revealed that Hubert was her father.

While Feron schemed to have the refugees executed for their supposed crime, The Musketeers worked to prove their innocence. Porthos eventually tracked down where the grain was being held.

Athos and D’Artagnan left Sylvie with Aramis and went to confront Captain Marcheaux (Matt Stokoe). Sylvie tricked Aramis into a kiss to get free and discovered that Leon, a friend of hers was a spy for the Red Guard. Before she could kill him, Marcheaux executed him and tried to blame Leon for everything that had happened.

D’Artagnan promised Marcheaux this his death would not be honourable. We’re sure they’ll be after each other for the rest of the season.

Elsewhere, King Louis XIII (Ryan Gage) was still spending the majority of his time with the Dauphin and ignoring the Queen.

The Musketeers reunited Sylvie with the body of her father. The Duke of Beaufort got his grain back but was ordered by the King to give it to the people.

At the end of the episode she thanked Athos with a kiss and looked like she’ll be staying around. Grimaud stopped by to thank the Musketeers but they sensed something wasn’t right and will be sure to cross paths with him again.

The next episode is Brother in Arms. Under orders, the Musketeers defend Louis’s traitorous brother Gaston after he slaughters a band of veteran soldiers in a Paris tavern. The heartbroken owner, Christophe, demands justice – but the preoccupied king welcomes his formerly exiled brother home with open arms. As tensions ignite and secrets spill, Treville crosses a dangerous line, and the Musketeers are forced to choose between their royal duty and fellow soldiers. Meanwhile, Feron and Grimaud spy a kindred spirit in Gaston.

Tune into BBC One at 9pm on Monday 20th to watch the episode. Preview episode 3 with our gallery below: