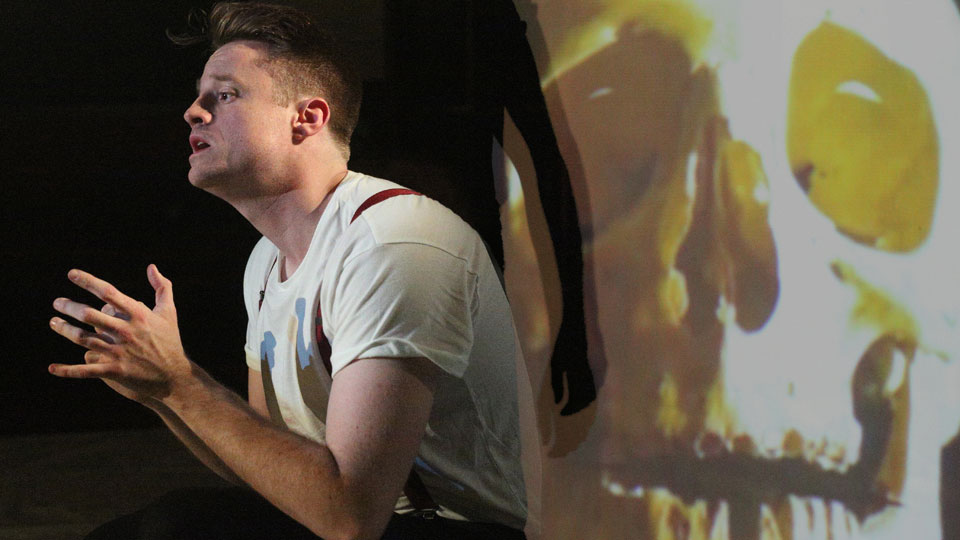 Gertrude – The Cry is a reinterpretation of Hamlet from the perspective of his eponymous mother.

As one of Shakespeare’s works most heavily criticised for the role of women, it is interesting that here the Hamlet story is reworked with a feminist look at sex and objectification. Originally performed at Elsinore Castle in 2002, the play will be in Theatre N16, Bromley, until the end of June.

It is performed in a traverse stage – a catwalk of sexuality: one minute in and you’ve got Gertrude and Claudius making love on top of King Hamlet – their dying husband/brother respectively. If nipples or incest offends you, this might be a tough two hours. The story goes on from here, and while staying loosely parallel to the events of Shakespeare’s longest play, it very much takes ownership of itself with new characters (replacing the Polonius family who are nowhere to be seen), plot twists and structure. I thought this was an interesting approach – it would have been one thing to give Gertrude more back story and motivation to fit into Hamlet, but wiping the canvas clean allowed it to get even dirtier. Perhaps by doing so, Gertrude – The Cry is making a statement that Shakespeare’s original plot could never have truly made for a feminist play.

The language of the script is halfway between Shakespearean and the current British vernacular. This creates an authentic tone whilst also not being ridiculously hard to follow. That said, you do need to stay switched on – as with a real Shakespeare play, every line is densely packed with imagery and a relevant message. One criticism I have regarding language is that the C-bomb is overused – while the word was used for a pun in Hamlet, here it is said frequently and almost throwaway. While perhaps the intention may be something along the lines of claiming back the word, it does distract, and at times feels as though its only purpose is to shock the audience enough to hold their attention.

The play deals with feminist issues of sexuality, e.g. how dressing promiscuously is not an invitation for sex, the assumption that all women’s goals should be to attract men and the analysis of sex as a power. There’s a lot of thought-provoking stuff there, and while challenging, it’s never incomprehensible. That said, there are times when the play gets wrapped up within its own didacticisms that we become detached from those articulating them – the final act is a bit messy, and I felt I did not know the characters any better than I did from ten minutes in.

Izabella Urbanowicz plays the role of Gertrude very well, making a sometimes loathsome character so easy to champion or feel sorry for. Another notable mention should go to Jamie Hutchins, who completely captures all of Hamlet’s inner conflict and uncertainty – “the world is full of things I do not understand.” The cast all bring something to the table, and collectively, manage to strike a few notes of humour among all the shouting, jealousy, murders and blow jobs.

If you’re a fan of Hamlet and find new takes on literature interesting, this is probably one you should see. The plot is not particularly inspired, and yet it does allow for Gertrude’s character to be explored more fully. Sure, you’ll be relieved to get out into the cold air afterwards, but with a captivating lead performance and some serious feminist exploration, Gertrude – The Cry revels in its own intensity. Sex is power after all.