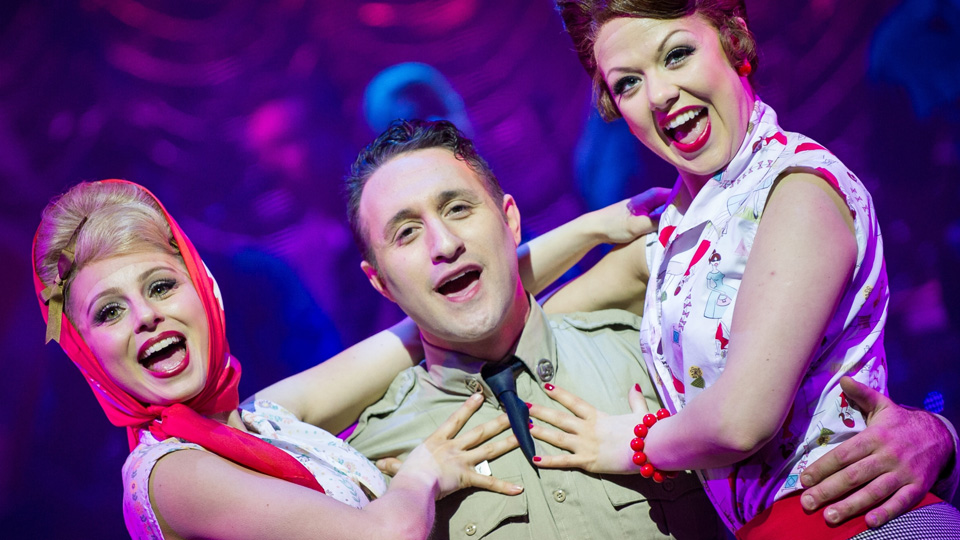 From the producers of Dreamboats and Petticoats comes Save The Last Dance for Me; a whistle stop jukebox musical which takes a nostalgic journey through the hits of the early Sixties.

Leading the show is Antony Costa, known to millions after a string of hits from the popular boy-band Blue. In the middle of a national tour, Antony speaks to us about Save The Last Dance For Me, giving audiences a flavour of what they can expect before the musical hits Leeds Grand Theatre this June.

Hello Antony. What attracted you to Save The Last Dance for Me?

I got involved with the show because I really loved the music and the script. With being involved in the music industry for so long I must admit I get drawn to musicals for the songs and hits included, great music really can make a show…Not only is it a great jukebox feel-good show it’s got a great storyline running through it, I feel this is vital for a show like this to captivate the audience and make the best production possible for the cast to perform, shows like this for me is what the best musicals are about.

It’s great to be back with Bill and the team. We went for the read through with Bill and he was so complimentary about myself which was a nice boost. Sometimes you need that in this business. It’s nice to get a pat on the back and know that you are doing a good job especially when it can be such a hard industry. It’s also great to be working with people that you have a strong working relationship with already, it makes the process easy and smooth for the both of us!

What can we expect from the musical?

Like always Bill has produced and directed a great Musical. Audiences should expect captivating music from the early Sixties, with all of the Rock’n’Roll classics featured throughout. As well as the great music, audiences will fall in love with the story set by the sea-side just like I did. This is a feel-good musical, and one to remember and tell all of your friends and family about.

Many people will know you best from Blue. Are there any future plans to collaborate again?

Me and the boys are very much never say never. We’ve been going for 15 years. This is our 15th anniversary and it’s a bit weird because we’re not together this year, but we’ll always be about. The other lads are all busy doing different things. We seem to all like a busy lifestyle as we’re all used to crazy work schedules, it’s what we all love. At the moment Duncan is doing Priscilla (Priscilla Queen of the Desert), Simon has done West End in the past and he’s doing a new album, and Lee is writing. For me, I’m enjoying doing my own thing and putting a stamp on myself, being part of Save the Last Dance for Me has really helped me do this.

What do you feel are the main differences between a concert tour and a theatre tour?

With a theatre tour you’re travelling on your own. When you’re in a band, you’re on the tour bus, you and the boys are always together, you’re watching DVD’s and having banter. This is a huge difference between the two types of touring. I loved being with the boys and having that type of touring lifestyle, it really worked for us as a group. Now when I’m doing more travelling alone I do get more time to myself, which isn’t a bad thing at all, it’s just a really different vibe.

Dreamboats and Petticoats was a huge hit and Save The Last Dance for Me seems just as popular. What is it about the Sixties which people seem to like so much?

In this article:Antony Costa, Dreamboats and Petticoats, Leeds Grand Theatre, Musical, Save the Last Dance for Me, West Yorkshire