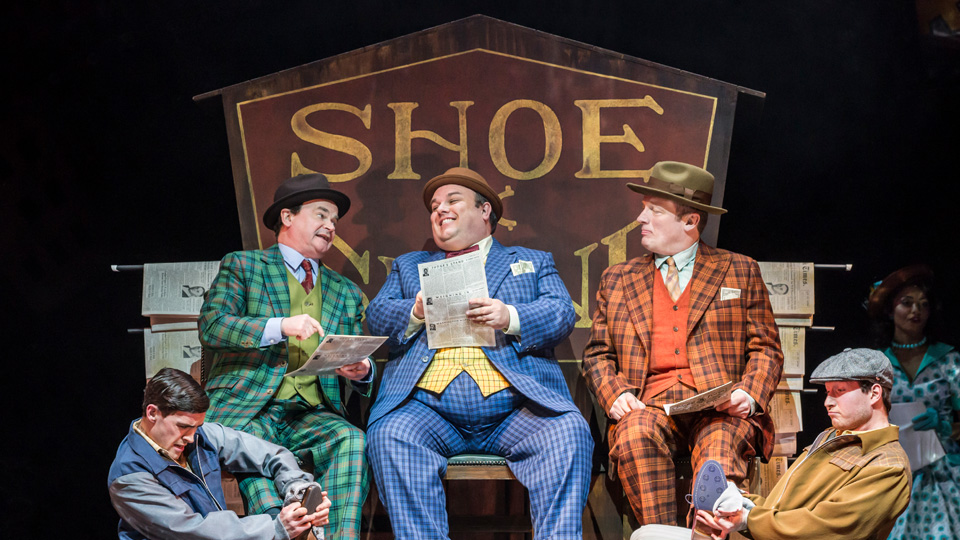 This month, Chichester Festival Theatre brings its new production of Guys and Dolls to the Leeds Grand. Opening on Broadway in 1950, the musical ran for over a thousand performances, winning a Tony Award before being developed into a legendary movie starring Marlon Brando and Frank Sinatra. Featuring a host of instantly recognisable musical numbers such as Luck Be a Lady, this new staging promises audiences a nostalgic, uplifting experience.

Guys and Dolls tells the colourful story of the prohibition era in New York. Alcohol and gambling is outlawed and petty crime rules the streets. Secret bars are rife and a subculture of men gamble with dice in the sewers. Above ground the drum-thumping Save-a-Soul Mission attempts to turn sinners to the light, led by the pious and beautiful Sarah Brown. Sky Masterson, a habitually slick gambler, accepts a wager to whisk a doll off to Havana and Sarah Brown becomes the mark. What begins as a bet soon blossoms into something else entirely different…

One of the most memorable elements of Guys and Dolls is its iconic score, with music and lyrics by Frank Loesser. Featuring tunes such as My Time of Day and Sit Down You’re Rockin’ the Boat, the numbers are instantly recognisable, uplifting and relentlessly catchy. Luck Be A Lady, a number which has been featured in advertising and movies numerous times, is particularly well arranged with an explosive brass section. Andy Massey’s musical direction is tight and punchy, providing a verve that drives the show forward whilst retaining a period authenticity within the arrangement.

An indelible element of the show is its production design, realised from scenery through to costume by Peter McKintosh. A gang of suited guys become identifiable as a line-up of contrasting figures, thanks to some imaginative and brightly-coloured costume combinations, whilst the dolls are tricked up in a feathery splendour of boas and bathing suits which will delight a large portion of the audience. The backdrop is a vista of classic branding and period advertising, evoking early 20th C Broadway through a dazzling frame of tiny flickering lightbulbs. There are only a few big changes to the scenery, however the fixed elements are richly detailed and endlessly arresting.

Guys and Dolls is a cheeky, cheerful and uplifting experience. It’s as Broadway as a musical can get, offering a pack of swinging hits which continue to entertain after sixty years. A classic which has been well served, this new production will delight fans and is the perfect entry for those who have never experienced the fun and fancy that is Guys and Dolls on stage.