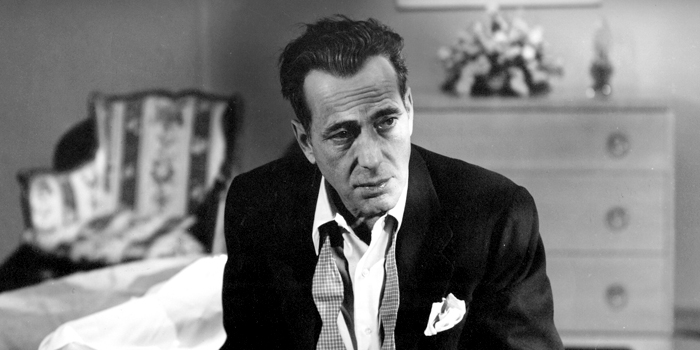 Humphrey Bogart gives one of the great performances of his career in Nicholas Ray’s superbly ambiguous film noir, In A Lonely Place. This existential Hollywood melodrama sees Bogart playing Dixon Steele, an alcoholic screenwriter with a foul attitude and a dangerous temper. When a girl who was last seen with him is found dead in a ditch, the only alibi he has comes from his neighbour Laurel Gray, a femme fatale played with sultry style by Gloria Grahame.

Dix and Laurel fall for each other, and for a while all seems to be well, but the police continue to treat him with suspicion. As the pressure on Dix builds, he struggles to maintain his cool and impassive facade. He starts acting strangely. He drinks more. There are flashes of violence. When Dix asks Laurel to marry him, she says yes but only out of fear. Could Dix really have killed that girl? Or is he just a victim of his own dark and embittered personality?

Nicholas Ray does a fantastic job, creating genuine suspense in this terrific Tinseltown thriller. But this is Bogart’s film from start to finish. By this point in his career, the wounded tough guy persona was less of an act and more an extension of his real life. The script resonated so deeply with him that he produced the film himself. His commitment to the material shines through as he utterly commands the screen. A wonderful and deeply sad performance. In A Lonely Place is a film noir classic.

This fabulous edition restored and released by Criterion comes with a multitude of extras, including an audio commentary from film scholar Dana Polan. The 1975 documentary, I’m A Stranger Myself, about director Nicholas Ray. There is an interview with Vincent Curcio, the author of Suicide Blonde: The Life of Gloria Grahame. Also on the disc is a feature from 2002 with filmmaker Curtis Hanson (LA Confidential) discussing what makes In A Lonely Place such an enduring classic. We also have the original trailer and the radio adaptation of the original novel.

In this article:Blu-ray, Bogart, In a Lonely Place, The Criterion Collection