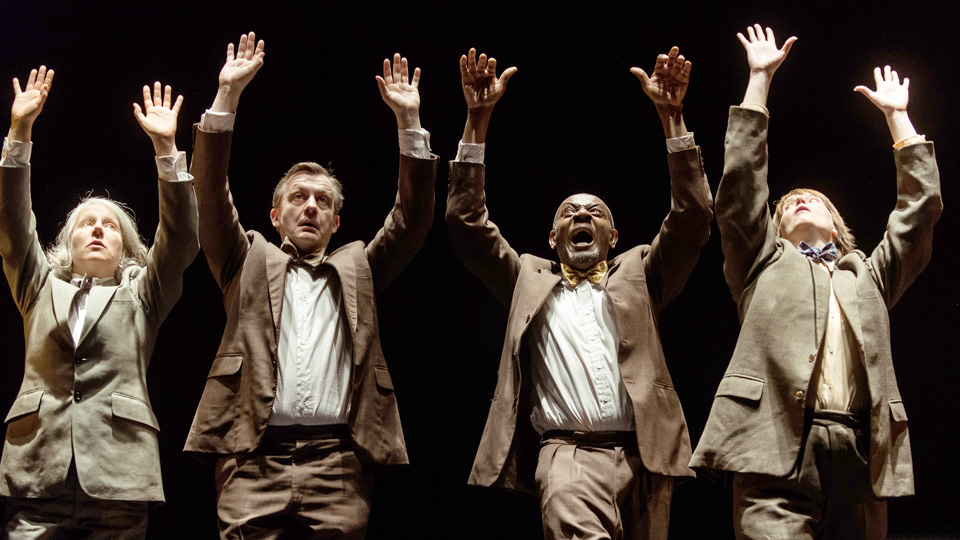 Improbable bring Opening Skinner’s Box to West Yorkshire Playhouse this month.
Adapted from the 2005 book by Lauren Slater, the play recalls the bold and
bizarre history of some of the most extraordinary psychological experiments of
the 20th Century.

Nestled within the Courtyard Theatre is a wiry, white frame of a cube. Stacked within are several smaller cubes of different sizes and shapes. A rack of white lab coats gleams against the blackness; the iconic uniform for the pioneers who are to narrate a psychological journey which asks why humans think and behave in particular and peculiar ways.

The stories are brought to life by a small ensemble cast, bohemian and arresting in tweed suits and bow ties. They adopt the roles of key investigators, explorers of the mind who impart the tales of ten psychological experiments. Some of the stories are familiar, such as the Milgrim Test of the early Sixties, which humorously recalls the ease at which authority can govern a person’s will, skewing one’s own moral compass. The analysis is played out with an intoxicating charisma; often hilarious yet also chilling, particularly following an attempt to explain through psychology the atrocities of the Holocaust. Other lesser-known histories are also recalled, including the earliest wave of lobotomies, clarifying the context in which the surgery was undertaken and the connotations of its legacy.

The ensemble, thinking outside the box. Photographer: Topher McGrillis

Each historical episode dovetails together, transgressing time and often contradicting one another in views or outcomes. Enacted within the simple set of the cube, often against black with only the occasional spotlight, the narrative content of the play is pulled into tight focus, purposefully feeling like a lecture.

Imaginatively directed by Phelim McDermott & Lee Simpson, the action captures the drive and intense excitement of new discoveries, often using ensemble mime to convey a sense of space and place. A sequence concerning lab chimps is extraordinarily well-realised, played with compassion and a tangible sadness. Equally striking is the use of a simple pillow as the focus of a devoted mother’s love for her comatose child, closing the first act with an indelible resolve.

Characters from scientific history burst with life and charisma. Stories are told with an eccentric enthusiasm, with all the manic conviction one would expect of an overly-caffeinated college professor.  The pace is often relentless, as the cast rattle
through complex yet sparkling dialogue with a naturalistic confidence. The direct engagement the performers have with their audience is a key element to Opening Skinner’s Box’s success, sustaining attention for two-and-a-half hours with ease.

Evocative, adventurous and insightful, Opening Skinner’s Box brings popular science to the stage with a dynamic realism. It’s a show which makes its audience feel incredibly intelligent, providing a unique odyssey through the mind which asks as many questions as it provides answers. Stylish, cerebral and irresistibly compelling, Opening Skinner’s Box is undoubtedly one of the must-see shows of this season.