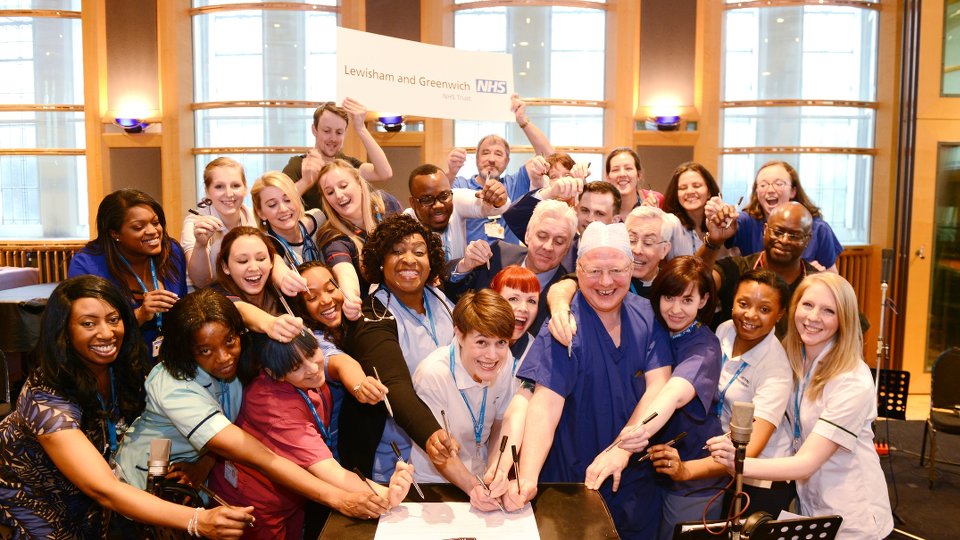 After beating Justin Bieber to the Christmas No. 1 last year, Lewisham and Greenwich NHS Choir has signed a record deal with Universal Music imprint Decca Records.

The choir’s debut album, Something Inside So Strong, will be released on 27th May 2016 and is a collection of uplifting classics. The record deal means that the NHS Choir share the same label home as Justin Bieber, who publicly supported their song encouraging his fans to get them to number 1 over his own single.

Lewisham and Greenwich NHS Choir is made up of around 30 members staff from right across the NHS workforce including doctors, nurses, physiotherapists, porters, chaplains, administrators and many more.

Choir co-ordinator Caroline Smith, who works as a children’s physiotherapist, says, “I’m delighted to be able to represent and support the NHS with such a special album. When everyone comes together in the choir it’s really powerful, I’ve never experienced anything quite like it.”

The Lewisham and Greenwich NHS Trust have directed that a minimum of £40,000 from the sale of the album are paid to its charitable funds, and will be used for the benefit of LGT patients and staff, to provide things that are not NHS provision but enhance patient experience or staff working lives – e.g. arts for health projects such as dance and singing groups for patients.

Lewisham and Greenwich NHS Choir were first seen on Gareth Malone’s BBC2 show Sing While You Work, where they were narrowly beaten in the final.

Something Inside So Strong track listing:

1. (Something Inside) So Strong (Written by: Labi Siffre)
Soloist: Brenda Harrydass-Clark

Advertisement. Scroll to continue reading.
In this article:NHS Choir