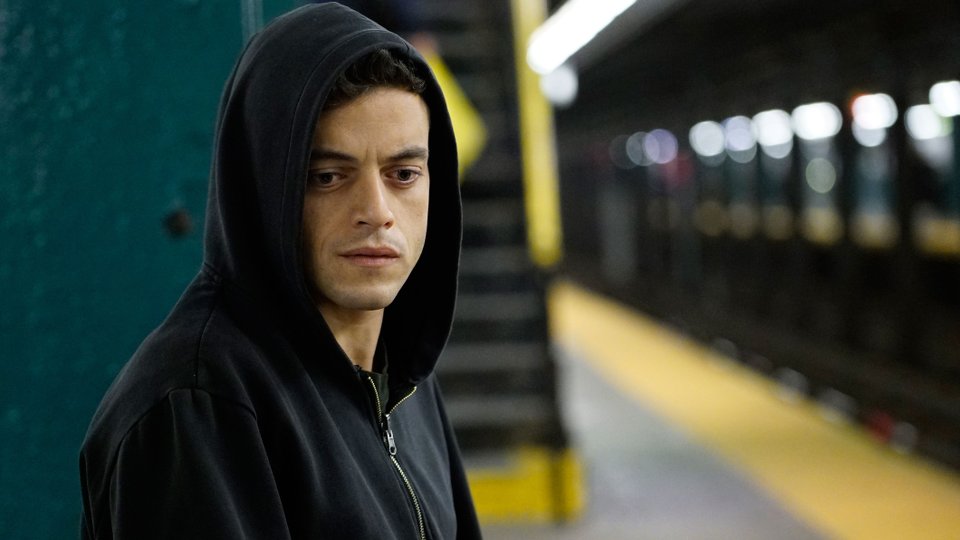 Cybersecurity engineer Elliot Alderson (Rami Malek) suffers from anxiety and depression that leaves him unable to properly socially interact with others. Excellent at his job, Elliot works alongside his friend Angela (Portia Doubleday) at Allsafe and he’s called upon to help her when hackers target the company’s biggest client E Corp. Following the hack attempt, Elliot is approached by a mysterious man known as Mr Robot (Christian Slater). He is invited to join Mr Robot’s group of hacktivists to help them achieve their goal of wiping out all debt records. Struggling to tell the difference between reality and fantasy, Elliot is drawn into Mr Robot’s world jeopardising his job and his friends in the process.

Mr Robot is one of those shows that premieres very quietly and goes on to be a word of mouth sensation. The show was renewed for a second season before the first even aired and it quickly picked up widespread critical acclaim despite modest ratings across its 10-episode debut run. At the end of 2015 Mr Robot made several best of the year lists and it has picked up a fair amount of awards and accolades.

If you’ve never seen Mr Robot then it’s fair to say it’s very different to anything else you’ve seen before. At its heart there’s a bit of a Robin Hood story going on but the series mixes thriller elements with modern politics. The show has a lot to say for itself and creator Sam Esmail clearly has some strong views about society and its flaws.

The series is told from the perspective of Elliot, played superbly by Rami Malek. He flourishes at work, where he has a natural affinity for his job in cybersecurity but he’s seriously tempted by Mr Robot’s offer as it would allow him to utilise his hacking skills to the fullest. It’s established early on that due to his social difficulties, Elliot keeps tabs on those around them by hacking into their social media profiles and emails to learn more about them. One such person is psychiatrist Krista (Gloria Reuben), who Elliot has a bizarre fascination with.

The other storyline that develops is that of Tyrell Wellick (Martin Wallstrom), who is the Senior Vice President of Technology at E Corp. He’s an ambitious man who will stop at pretty much nothing to get what he wants. Elliot intrigues Tyrell when they first meet and their relationship evolves in surprising and interesting ways over the course of the season.

Aside from the spectacular writing, it’s the performances that really make Mr Robot stand out from the pack. Christian Slater makes a real comeback as Mr Robot utilising his bad boy side but also giving some genuinely layered performances. The show really belongs to Rami Malek though who is absolutely sensational. His performance is one of the best I’ve seen on TV and he brings all of Elliot’s personality traits to life in the most wonderfully understated way.

Special features on the release are fairly thin on the ground. There are is a selection of deleted scenes, a gag reel and two short behind-the-scenes featurettes.

Mr Robot Season 1 is a fairly flawless debut outing for a show with a hell of a lot of promise. It’s mysterious, intriguing, complicated and hugely enjoyable. If you didn’t know Rami Malek before, you certainly will do after his incredible performance here. File Mr Robot up there alongside top shows such as Mad Men and Breaking Bad because it really is that good. Roll on season 2 and hopefully much bigger ratings (which the show definitely deserves) will come with it.