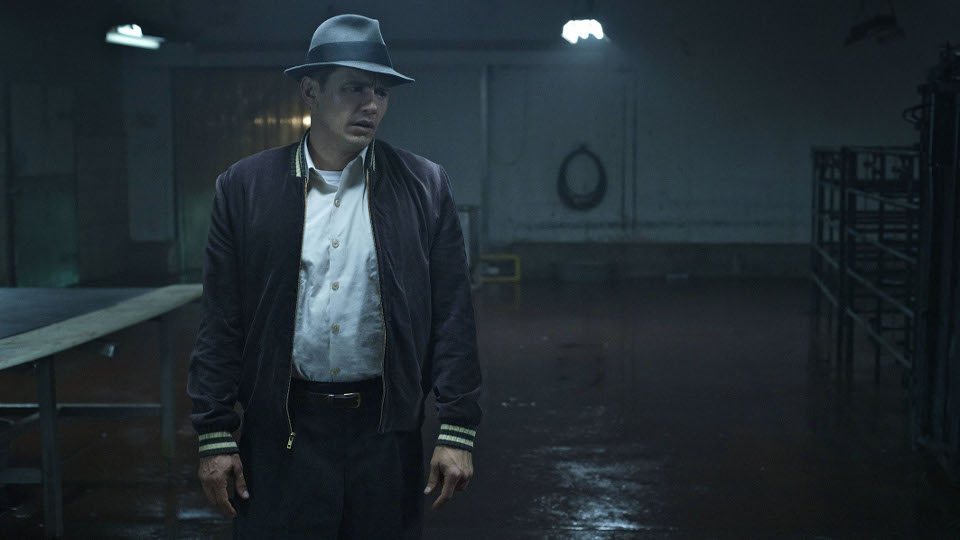 On the first episode of 11.22.63, high school teacher Jake Epping (James Franco) visited a diner run by friend Al Templeton (Chris Cooper). When something seemed wrong, Jake discovered that Al had cancer. Jake took him home and Al said if he returned the next day he would explain things.

The next day Al again promised to explain things but first made a bizarre request that Jake walk into a closet in his diner. Al said it would help him explain things and told Jake to stay as long as he needed. Confused, Jake agreed and found himself walking into what appeared to be more of a dark empty tunnel. As Al encouraged him to keep going Jake found himself suddenly transported to a different time – October 21st, 1960 to be exact.

After a short time, Jake went back the way he came and found himself walking out the closet and back in the present day. Jake returned to Al for answers and asked if the closet is a time portal. Al preferred to call it a rabbit hole. He then explained the rules.

Each time you enter the closet you get transported back to the same moment in time. You can stay as long as you like but when you return only 2 minutes will have passed in the present. Each time you return any changes made on previous trips will be erased.

To prove to Jake that changes will persist in the present he sent him through the closet again. Sure enough he arrived back at the same moment as his previous trip and all the same things happened. This time he used a knife to carve the initials JFK into a young tree and when he returned to Al’s diner they were still there on what is now a mature tree.

Al explains he wants Jake to do what he hasn’t managed – to go back in time and prevent the assassination of JFK. Al believes that doing so will make the world a better place. One problem is that a journey through the rabbit hole arrives nearly three years before the assassination so Jake would need to survive in that world for a long time.

Al’s been preparing for this moment and shows Jake a room where he keeps all his research into the past. It’s full of news clippings and models of the assassination. He also has money, a book of sports results and a collection of ID in the name of James Amberson for Jake to use.

Initially Jake refuses which left Al very upset and angry. Eventually he goes back to see Al and changes his mind when he finds that Al has died.

Back in the 60’s Jake sets about trying to fit in. He gets himself a shave and haircut, buys a suit and hat as well as a fancy car. He also visits a diner where he eats the best pie he’s ever tasted (Al told him the food was nicer). At the diner he runs into a friendly young girl named Alice who he realised is the same woman he works with in the future.

Jake already getting low on cash decided to make good use of the sports results he possessed. He made a visit to a shady bar where he placed a $100 bet on a boxing match at 35-1 odds. The size of the bet drew attention to himself and even more when he won the bet.

After making a swift exit he found himself a motel to stay at. Jake’s fancy car made him stand out and he only managed to stay for a few minutes before he was tracked down by one of the men from the bar. Using his smartphone as a distraction, with a video of a dancing parrot, he managed to escape.

The rest of the episode Jake focused on the task at hand. He scouted out the assassination location, found himself a new place to stay that Al had recommended and flirted with a married woman. During his flirtation he got his dates mixed up and talked about a film of The Manchurian Candidate that hadn’t been made yet.

Al had told Jake to focus on Lee Harvey Oswald and wanted him to find out if he was involved in the assassination attempt on General Edwin Walker. He started by following a friend and alleged handler of Oswald named George de Mohrenshildt. Jake ended up at a JFK speech and there he got caught by security. He managed to talk his way out and after catching up with George again he found him meeting with the CIA.

After confirming that George was meeting with the CIA, Jake returned to the place he was staying to find it burning to the ground and all his paperwork destroyed.

Al had warned Jake that the past doesn’t want to be changed and that if you try to mess with it then it will push back. Jake experienced this when trying to get to George as a drinks tray set on fire, then a chandelier dropping from the ceiling. Also when he tried to phone his father the phone line made it impossible to talk to him and moments later a car left the road and smashed through the phone box he was using.

The episode had started in Jake’s classroom where one of his night class students, called Harry, had recalled the terrible day his father had murdered his whole family. At the end of the episode Jake decided to head to Kentucky to find Harry and try and prevent the murders.

The next episode it The Kill Floor. Jake stays around Harry’s hometown to prevent Harry’s father from murdering his family. Things go south fast as he gets too close to the family and ends up messing the time line.