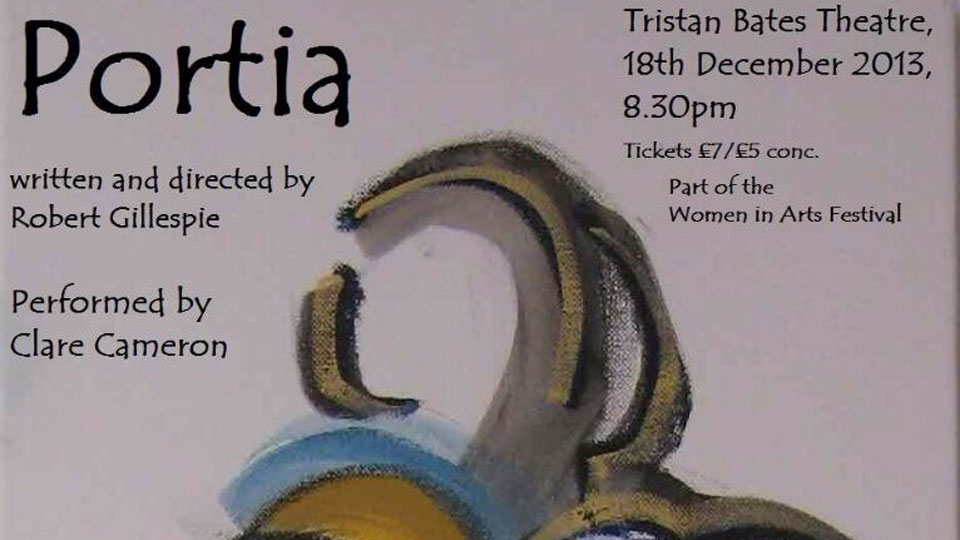 If you’re a jobbing actor, how do you approach a major Shakespearean part? That’s the set-up of Portia, a one-woman show written and directed by Robert Gillespie.

Over the course of an hour, the character of Isabel lets us in on her professional and personal life, offering insight into the simultaneous terror and joy she feels in becoming the heroine of The Merchant of Venice. All of this is tackled with wit, wisdom and humour.

In the role of Isabel is Clare Cameron, whom we previously saw in Gillespie’s Love, Question Mark, and who steps effortlessly into the wry, observant world imagined by the writer. Never mind how do you tackle a meaty Shakespearean part: how do you carry off a show by yourself? The director’s programme notes provide an amusing observation that most people think they could act if they put their minds to it: this production should serve to force anyone sane to reassess such a conviction.

It takes talent and technique to engage an audience and to hold their attention for an hour whilst truthfully telling a story. Cameron does so with the illusion of naturalism, but in the role of Isabel she reveals a great flair for comic timing, relishing a good number of sardonic asides. Giving voice to off-stage characters such as school teachers, professional directors, truculent actors and to Portia herself, Cameron’s richly varied and nuanced performance is nothing short of superb.

Over the course of the play, we learn how Isabel found her big acting break – usurping the role of Mary from another child in the school nativity – whilst her past interweaves with her present. Science enthusiasts will enjoy Isabel’s stories about her most significant relationship, with the father of her child – an intriguingly shadowy figure who kept a picture of Werner Heisenberg on his wall and shared his uncertainty. The reference isn’t glib. It’s heartening to see that modern playwrights are beginning to recognise the potential of how science illuminates the human condition, and to tap into the dramatic potential of it. The cleverly layered text left sections of the audience laughing at different cues.

Gillespie’s script also offers a fascinating analysis of the themes of the Merchant of Venice, which is less an academic discourse and more a perspicacious look at how actors think. Thus the fate of an intelligent woman such as Portia, available for marriage to a suitor who correctly guesses a riddle in a lottery (I mean, come on! Portia’s father must have been certifiable at the time he wrote his will…) is echoed in the contemporary stories. Most perceptively of all, Isabel notes that Portia has to pretend to be a man in the final scene to be taken seriously by Venetian society, and has to stand her ground against the male director to evoke its significance. The wider themes of tribalism and racial prejudice, perennial blights upon the human condition, are also given a fair hearing here.

Portia is a brilliantly crafted monologue full of interesting ideas, and the show proved a terrific combination of two born story-tellers in symbiosis, making for a diverting, thought-provoking and funny hour of theatre. It’s not just one for the actors (though actors will find much to relate to); it’s not even just one for the women (though the frank analysis of how much has really changed for women in the four centuries since Shakespeare’s time will resonate with most); it’s a warm story of what makes us who we are, and the limitations imposed upon us by society, that will touch everyone in different ways.

Portia formed part of the three-day Women in the Arts Festival at the Tristan Bates Theatre that ran from 16th-18th December.