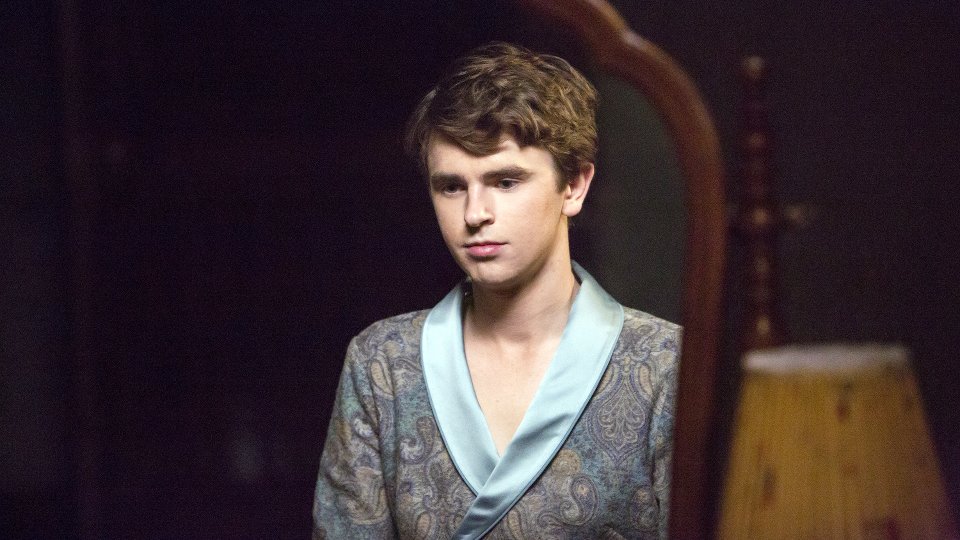 Bates Motel returns to UK screens this week for its fourth season and it promises to be the darkest season of the show yet.

When we last saw Norman Bates (Freddie Highmore) he was murdering his on/off girlfriend Bradley (Nicola Peltz) after the two had arranged to run off together. In a twist Norman believed he was Norma (Vera Farmiga) while committing the murder signalling that his descent into madness was progressing.

Ahead of the show’s return, I caught up with Freddie Highmore to find out what the fourth season has in store, discuss the complicated nature of Norman and Norma’s relationship, and to talk about Freddie’s move behind the camera for one episode this season.

Season 3 of Bates Motel had a pretty sinister ending with Norman killing Bradley but thinking he was acting as his mother. Where does season 4 pick up?

It picks up in the aftermath of that death. There’s no big gaps between the seasons so you’re thrown right back into it. Norman, certainly at the beginning, is spiralling out of control and there may well be another death early on. The rest of the season there’s a more analytical look at what is actually wrong with Norman. There’s a sense that he tries to get better and tries to overcome the multiple issues he struggles with.

I always say this at the beginning of every season, because you feel like you should, but this is the best season that we’ve done. It’s actually genuinely very easy to say that.

Bates Motel has become progressively darker with each season. Would it be safe to assume that this is the darkest season yet?

Yes, I think so. It’s the pay off for all of that build up and suspense in everyone’s relationships. You really feel this season that you’re moving rapidly towards the end. We know that there’s going to be five seasons of the show so we’re working towards that end point now and pushing Norman more and more into insanity whilst at the same time trying to keep him empathetic and have the audience on his side.

Norman and Norma’s relationship became more complicated than ever in season 3. Are we going to see them continuing to be pulled apart or will the two come back together as Norma tries to help her son?

I think there’s a sense in season 4 of the inevitably of their closeness and their relationship. However much they try or they may see it fit to try and pull apart there’s this growing sense that that’s ultimately going to be impossible. The other interesting things in terms of this season is the developing of this mother side to Norman, which we see quite strongly in this opening episode when he turns into his mother and feels like he is her. He behaves like her and acts like her.

Similarly to the switch at the end of season 3 when you saw Vera playing Norman playing Norma thinking that he’s Norma killing Bradley and bashing her down on the rocks; there’s going to be more scenes this year where both Vera and I are playing the same character, the character of mother, in one scene. That was particularly interesting for us as actors because it was never something we’d done before in terms of creating a character with someone else. I would do a take then she would do a take, and we’d use each others ideas and be inspired by each, and ultimately create this character that was just a mesh of our ideas.

How difficult it is for you to be able to take on the characteristics that Vera has established with Norma? Do you study everything that she does?

I guess I do know Vera so well now that there’s a certain amount that you know innately. I spend so much time with her as a person and her family is my family out here in Vancouver, and also on set seeing how she behaves as Norma. I realised there was a certain amount I just picked up. There’s also this other sense of not overdoing it. I think there’s a danger of trying to do much and it being too performative because Norman in the moment genuinely feels like he is her and isn’t acting or trying to put on this other personality. It’s pulling back and not doing too much so it doesn’t feel studied or unreal. For Norman it’s very real.

Let’s talk about the supporting characters. Season 3 was pushing us towards a Dylan and Emma romance. Is that something that will blossom?

Yes. Dylan and Emma certainly get closer. The more immediate problem for Emma surrounds the lung transplant that she’s going to have. Dylan is there supporting her there through that but obviously it’s a pretty big operation.

Will their burgeoning romance cause problems with Norman?

I think that Norman very quickly moves past that being an issue. There are other things that arise early on that mean his attention is turned in other directions; not romantically more issues that he has to deal with that are focused around him and his mother (laughs).

I feel instinctively that Romero is a good person at heart even though he has his foot in the good and the bad of the town. Will he and Norma continue to navigate the hint of romance that appeared in season 3?

Norma and Romero do get closer very quickly towards the start of this season. Norman and Romero’s rivalry is certainly present too. I always enjoy the scenes with Nestor who plays Romero because from Norman’s perspective he sees it as two men battling it out. Romero is so much more obviously the man and is there thinking he can take care of things and sort things out. I think Norman is more insightful about his relationship with his mother than anyone else. The sad thing for Romero is despite his good intentions in many ways, he may not actually be right. We’ll see that play out in his relationship with Norma and his rivalry with Norman.

You’ve written an episode this season. What was that experience like for you?

Yes! I’ve written the eighth episode of the season. There was a certain amount of it that seemed natural. You spend so long working, 4-5 months, you put everything in this character and being on set that it felt quite odd to just leave it behind completely and go away in between seasons and have no input on the direction of Norman and the show. Kerry and Carlton…I’m very fortunate that they allowed me to be part of the writing team and join them in the writer’s room to pitch ideas this season, and also write the eighth episode. Hopefully it goes down well and people think it’s all right.

Now that you have written an episode, do you have any interest in stepping behind the camera to direct in the future?

Yes hopefully I’ll be able to direct an episode of next season. That would be great. For this season the writing was fun and I think it’s something that I want to do more of in the future. It’s funny, I’ve always combined acting when I was younger with school then later university, and I guess there is that sense of wanting to continue to combine acting with something else in a slightly different discipline in the area that uses a slightly different side of your brain.

In this article:Bates Motel, Freddie Highmore