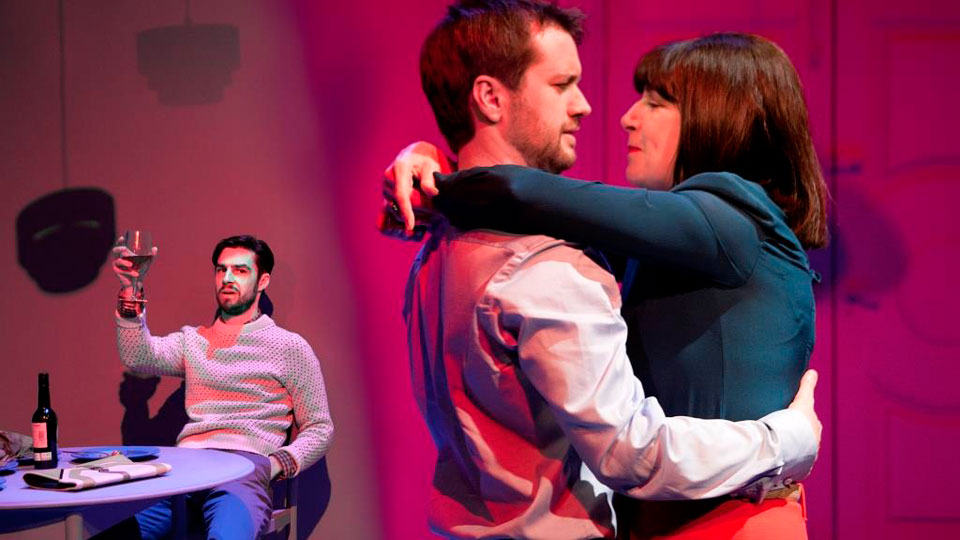 Most people say they’d never swap their partner with someone else’s for a night, but how can you know for sure? Right Now, directed by Michael Boyd, former Artistic Director of the Royal Shakespeare Company, is a psycho-drama production at the Bush Theatre which makes the case that even the most ‘normal’ people have buttons that, if pressed in a certain way, can turn them into swingers.

The foundations are there from the beginning with our ‘normal’ couple, Alice (Lindsey Campbell) and Ben (Sean Biggerstaff): Ben can’t win – Alice has a go at him whether he wakes her up or leaves her to sleep. Alice feels lonely – stuck in the house all day being haunted by something tragic which she seems unable to talk to her husband about. When she asks him to come to bed he would rather sit on the sofa. Frustrations are in the air.

Enter the family from the flat across the corridor. Gilles (Guy Williams) and Juliette (Maureen Beattie) are an older couple. Both actors do an excellent comedic job of playing full-on and imposing, making it at first hard to foresee said wife-swap. This isn’t helped by the fact that they don’t go anywhere without their son, social recluse François (Dyfan Dwyfor). The twenty-something year old seems slightly obsolete to the narrative for the majority of the play, but offers his fair share of laughs to keep things bouncy.

He’s not alone – the first half of Right Now has us chuckling repeatedly at key moments as well as tensing up, feeling sad, cringing in the right places and maybe, just maybe, getting hot under the collar. The pace is quick – it has to be to progress the families from being strangers – but for the most part, it is not too rushed so that we manage to suspend our disbelief.

That is, until the inevitable ‘switch’. When our leads realise that the grass might be greener on the other side of the corridor, as it were. The script does not quite do enough to fill the gap between the characters enjoying some attention and actually cheating on each other, thus a lot of the believability is lost. The Oedipus complex is suddenly brought out in Ben, but the foundations were never there so it feels like a last-minute decision to allow the plot to press on.

Alice and Ben go from being quite headstrong to being very easily influenced by an amorous couple who come out with cringe-bombs such as “cute underwear on a flabby thigh just isn’t the same.” Every intricate facial expression that Campbell and Biggerstaff made from the beginning to suggest that they find their neighbours odd is negated by their sudden switch to the swingers’ club. They change their opinions back and forth several times – the gradual, linear shift in mindset that Right Now seemed to set out to convey becomes all over the place, and at some points you might even question if Alice and Ben are on drugs.

But with the final ten minutes, you realise it goes further than that, and actually, this was never meant to be a realistic play about why people swap partners. Spoilers avoided, the ending is exactly what you want out of a drama such as this with a semi-predictable narrative – it makes you reconsider how you were thinking about the whole thing. You suddenly realise why there are five cast members and there is a killer surprise that made every member of the audience draw breath, conducted in a way that would not nearly have had the same effect in any medium other than theatre.