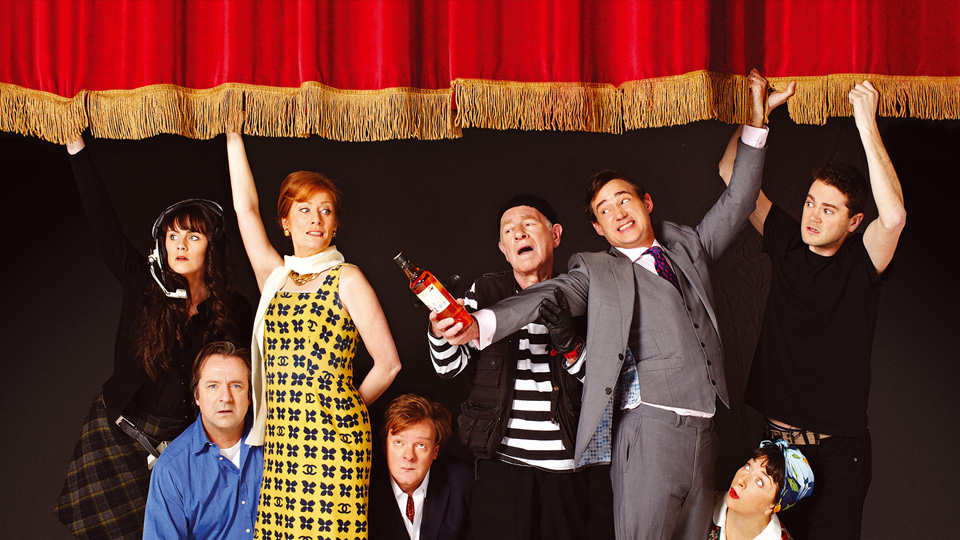 The Old Vic brings Noises Off to The Grand Theatre Leeds this week. Michael Frayn’s farce-within-a-farce sendup of theatrical comedy is considered by many as the funniest show of all time. After some thirty years, does Noises Off still sound out as many laughs as it once did?

The action begins during a final rehearsal for farcical comedy Nothing On at the Grand Theatre Weston-Super-Mare. Director Lloyd Dallas (Neil Pearson) is struggling to get his cast off-the-book before curtain up. Things aren’t going well and as the show kicks off on tour to sunny Stockton, backstage shenanigans, affairs and an under-rehearsed show climax in a chaotic breakdown of theatrical proportions.

The genius of Michael Frayn’s script is introducing audiences to the frantic process of theatrical production. The initial half of the show effectively staggers through the first act of Nothing On – a wet farce with limp gags and stereotypical characters. The desperate rehearsal phase of Nothing On reveals the essential function of blocking, placement of props and general business, as well the pitfalls of actors adlibbing. The luke-warm gags also criticise broad comedy, acting as a vehicle to showcase the true farce which develops around and within Nothing On’s production.

Audiences will revel in the voyeuristic exposure of Noises Off, revealing a flavour of genuine backstage chaos. This is arguably why the show also remains a favourite with theatre professionals; Frayn’s comedy is based partly on the presumption that actors generally aren’t very good with doors or personal props and that they obsess over details; directors often lose their rag, feel disconnected from picky performers and consider themselves God; technicians are treated as second-rate citizens and on the whole hate anybody who isn’t technical. Moreover, Noises Off reveals that often the backstage antics of a production can often prove more outrageous than the dull dramatics presented on stage.

Noises Off actively criticises unnecessary and mindless business in comedy; the constant allusion to sardines in the Nothing On script is puerile and nonsensical. To counter this, Frayn introduces an excess of props, from cacti to bedsheets and axes to doorknobs, pushing farce to a heightened level of synchronised stage business. Lindsay Posner’s direction must be commended for making the incredibly complex appear wholly naturalistic, proving that farce can be the highest form of comedy. The second act in particular, revealing the backstage activity as well as a front-facing performance, is some of the most time-critical physical comedy seen in modern theatre. Audiences will undoubtedly laugh, yet also be stunned by the outstanding stagecraft which Noises Off seamlessly presents.

Neil Pearson is a particular draw to the show, providing a naturalistic gravitas to the chaos surrounding him. His performance in the first act is particularly impressive, as it is projected from within the dullness of the auditorium space. Much of his onstage activity is also conducted with his back to the audience in the guise of director. It’s a highly skilled actor who makes this sort of performance look easy. David Bark-Jones provides an exhaustive and energetic turn as Garry Lejeune, whilst Maureen Beattie is agreeably batty as Dotty Otley, with overtones of Mrs. Overall from Acorn Antiques. Chris Larkin is hilarious as middle-class twit Frederick Fellows, who also plays a middle-class twit in Nothing On. Thomasin Rand perfectly pitches juvenile idiocy as Brooke Ashton whilst Sasha Waddell’s mindlessly good-natured Belinda Blair is the catalyst for many laughs. Technical crew are perfectly cast in Simon Bubb and Danielle Flett as two down-trodden and overworked crew who become equally confused and tangled in the madness. Finally, Geoffrey Freshwater steals his scenes as woefully miscast and deaf actor Selsdon Mowbray.

In addition, Noises Off must have one of the finest souvenir programmes to be seen this year. Whilst it offers all the standard musings and photography expected for a touring production, it also contains the genius concept of an additional programme for Nothing On. Printed in two-tone in the voice of Private Eye, it’s a hilarious satire with evocative retro design that many theatregoers will recognise from yesteryear.

Despite being over thirty years old Noises Off still resonates loudly, measured by the volume of laughter which was constant during the third, climatic act. Very much a product of its time but successfully parodying it, the show is presented with a genuine late-Seventies flavour. A relentlessly fresh farce with a fabulously retro veneer, Noises Off is superbly choreographed chaos and a cheeky window onto the backstage madness of theatre. For persistent theatregoers it is a show not to be missed.