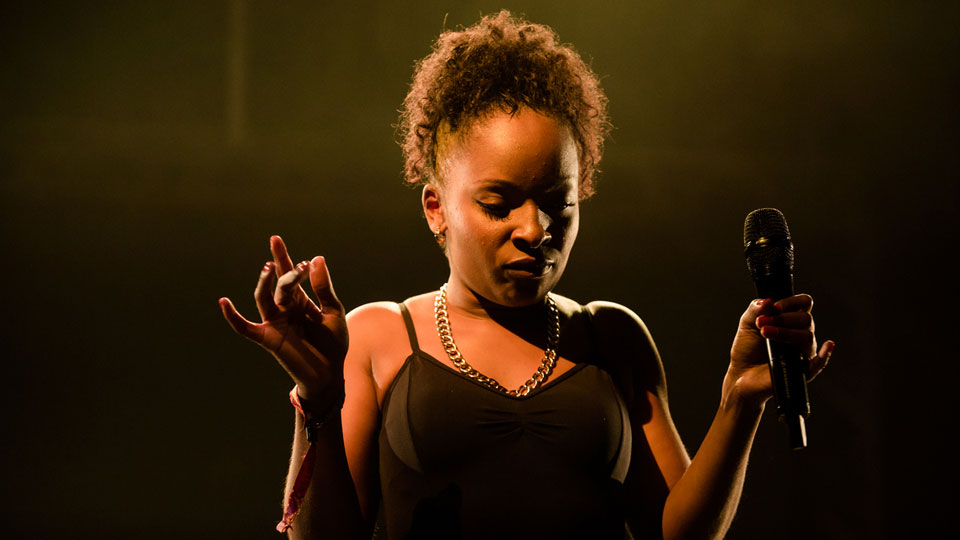 Ahead of the full 2016 season announcement from Paines Plough, With A Little Bit Of Luck by Sabrina Mahfouz will begin a UK tour on 13th April at The Garage in Norwich. You can see a trailer below.

Part-play and part-gig, With A Little Bit Of Luck is produced by Paines Plough and Latitude Festival and will tour to 29 venues across the UK. The tour will finish at London’s iconic Roundhouse from 14th – 18th June as part of The Last Word Festival.

Originally commissioned for a festival audience, With A Little Bit Of Luck premiered to standing ovations at Latitude Festival in 2015. The production features Seroca Davis as Nadia alongside the vocal talents of Martyna Baker and DJ/musician Gabriel Benn, directed by Stef O’Driscoll.

Nadia is swept up in one hot summer’s night of love that promises endless possibilities. Drinking, dancing, hope, ambition, lust, greed… and decisions that will determine the rest of her life.

Rhythmically underscored by a live mix of old school UK Garage, award-winning writer Sabrina Mahfouz explores the legacy of a cultural movement that defined the hopes of a generation.

Martyna Baker is a songstress, songwriter and performer. Her self-penned songs are a heady mix of soul, indie, dance and world music, the result being a truly mesmerising and eclectic selection. Having written on Gorgon City’s top ten album ‘Sirens’, Martyna went on to work with House legend Todd Terry and Drum and Bass prodigy Lenzman. Alongside this she has written and produced her debut EP ‘Fear the Fall’, which was released in November 2015. A regular on the London circuit, she also leads workshops with groups of vulnerable women helping them to express themselves through the medium of song to create a sense of support and community.

Gabriel Benn is a pianist, composer and electronic producer of a Jazz background, whose understanding and playing of musical styles has been enriched by years of travelling in Africa and South America. His projects Tuesday Born and The Busy Twist have received critical acclaim, earning him a reputation of an innovative music maker, reinventing famous garage classics.

Sabrina Mahfouz is a writer. Alongside her work with Paines Plough, she is currently working on writing plays, poems, librettos and TV for BBC3; Kate Whitley; Futures Theatre, Theatre Centre and Aakash Odedra. Her creative work has been recognized with a number of awards including a 2014 Fringe First Award; a 2013 Sky Arts Futures Fund Award; an Old Vic New Voices Underbelly Edinburgh Award and a Westminster Prize for New Playwrights.

For more details about the festival, see www.latitudefestival.com; and see www.painesplough.com for details of the production company.

In this article:Paines Plough, With a Little Bit of Luck