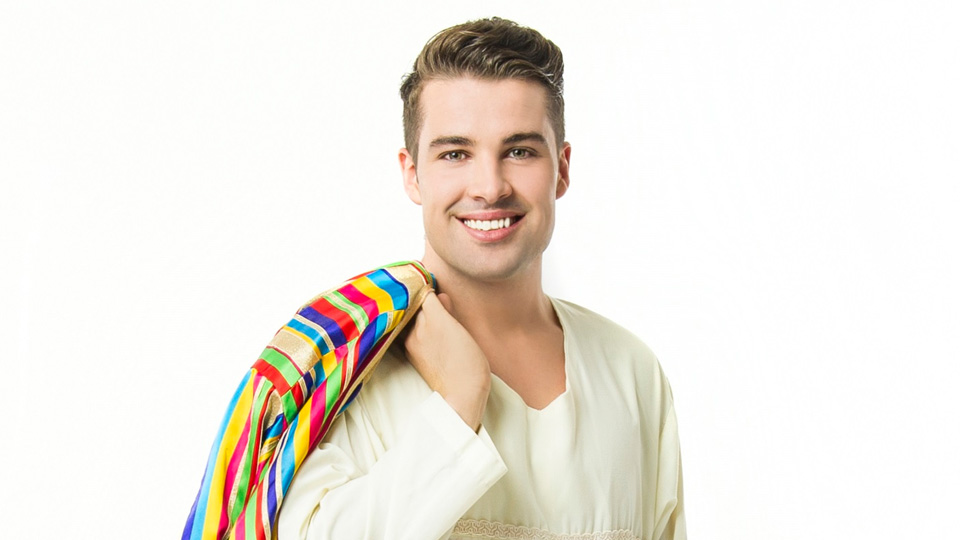 This Spring sees one of the longest-touring musicals return to the Leeds Grand Theatre. The first major collaboration between Andrew Lloyd Webber and Tim Rice, Joseph and the Amazing Technicolor Dreamcoat is one of the most celebrated musicals of recent years. Boasting stars such as Jason Donovan and Donny Osmond in the leading role, it has also proved to be a perennial favourite with families and particularly children.

Director-producer Bill Kenwright was responsible for the UK touring production throughout the 1980s. He brings this revived version to Yorkshire with a recognisable popstar fronting the Technicolor action; Joe McElderry of X-Factor fame dons the coat of many colours and makes for a charismatic and vibrant Joseph. Delivering vocally and expressively, McElderry quickly proves to be a great hit with young audiences, captivating children with his own child-like performance which grows in strength to superhero-standards in the closing numbers.

Lucy Kay, in the role of narrator, has a wonderful songbird clarity to her voice which is a particular highlight of the show, appearing beside McElderry as a vocal partner throughout. The show also boasts an excellent chorus, particularly the sons of Jacob who assume several other roles within the show. Constantly dancing with their own unique characteristics, they resemble a circus troupe who subvert and amuse. Special notice must also go to the youth choir who are constantly onstage, providing an uplifting vocal chorus which is a pleasure to experience.

Joseph is completely sung-through with little traditional dialogue to punctuate musical numbers, providing a relentless musical experience. Lloyd Webber’s compositions are anthems by today’s standards and Any Dream Will Do will resonate with audiences in their thirties, thanks to Donovan’s hit single from 1991. Other numbers, such as Joseph’s Coat, Go Go Go Joseph and Jacob & Sons are equally rousing and all carry the Lloyd Webber flavour of synth-piano, striking brass and contrary-motion basslines.

Stylistically the music borrows from every genre going; from country & western to ragtime and rock ‘n’ roll, with direction that matches the anachronism; Twenties’ flappers and cowboys ride around a Las Vegas interpretation of ancient Egypt. It’s disorientating and bizarre but somehow, through sheer boldness, it works and manages to engage dramatically as well as musically.

Joseph is a relatively simply-staged production, with a set of opposing steps leading to a horizon framed by Egyptian pillars. It is designed as a venue for musical performance and a little drama, and as such the abstract realisations of pyramids, sphinx and rowing boats work well within its fantastical setting. Visually the show does not have the bravura scale nor expense which would be expected of a West End production, however what it lacks in spectacle it makes up for with humour and playfulness, skilfully parodying pantomime scenery with inflatable sheep and hilariously animated 2D camels. Despite its homespun aspects, the show has an alluring magical quality and warmth which will impress audiences and especially youngsters with their facility to suspend disbelief. The coat of many colours, in particular, is an excellent piece of costume and its impressive reveal is as beautiful as a galleon in full sail.

Joseph is a show of many genres, offering the appeal of a jukebox musical with all the added pomp of traditional musical theatre. A soda-pop production fizzing with froth, fun and colour, it is the perfect production for schools and families and is guaranteed to have kids singing the songs all the way home.

Joseph and the Amazing Technicolor Dreamcoat is at Leeds Grand Theatre until 26th March, before transferring to Manchester Palace Theatre. Book online at leedsgrandtheatre.com or call Box Office on 0844 848 2700.