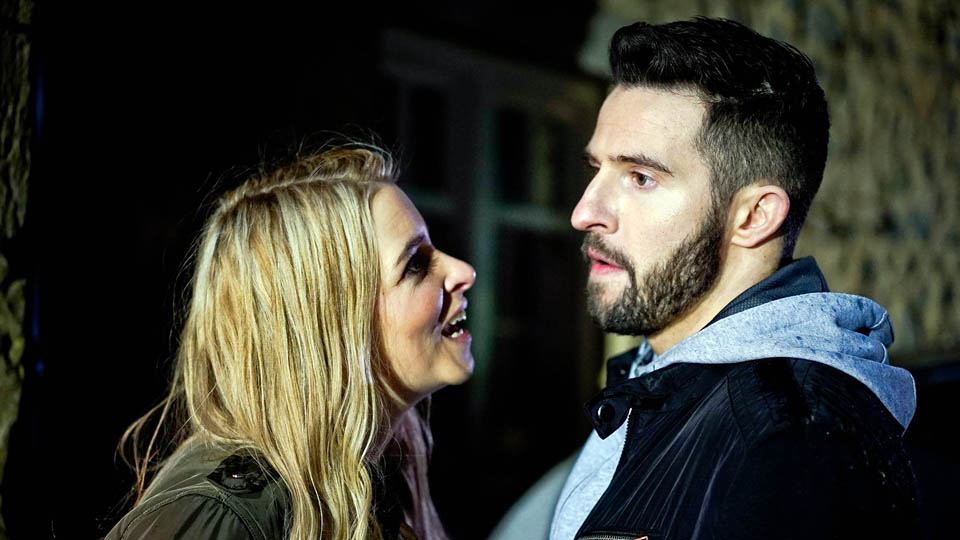 Welcome to our regular look at the biggest stories we’ve got to look forward to this week in Emmerdale.

Will Ashley and Laurel’s wedding go without a hitch?  Aaron faces hassle from an unexpected source and Charity has Emma and Ross over a barrel.

Charity has a proposition for Ross

Ross is suspicious of Emma’s behaviour and works out that Charity is behind it.  He’s shocked to learn that she’s blackmailing his mum over her hiding Noah at the B&B when Cain and Moira had thought he’d run away.  Ross confronts Charity only to find that she knows his dirty little secret about shooting Robert, so has one up on him too.  Charity demands £50,000 by 5pm and sends Ross reeling.  He heads into town and dressed in disguise, he goes to a jewellers clearly with a money making plan in his head.

Meanwhile, Charity is disturbed to learn from Cain that Ross has gone on a job and taken baby Moses with him too.  Charity makes a beeline for the charity shop only to find Ross walking out.  Has his plan worked or will Charity end up saving his bacon?

Ross has soon given Charity his ill earned cash and she uses it to pay Doug money for the pub as a first instalment.  Clearly seeing an opportunity, Charity makes Ross a dodgy business proposition.  Will he accept?

Chrissie makes a move on Andy

We knew there was a twinkle in Chrissie’s eye when she’s seen Andy recently and when she hears he stood up for her to Robert, the attraction just grows.  After she heads to her solicitors to finalise her divorce from Robert, she enjoys spending time with Andy and fakes hurting her ankle so that Andy picks her up.  It’s soon obvious she’s faking and she playfully trips him up and then runs towards the house with Andy in hot pursuit.  It’s not long until they are sharing a passionate kiss.

Later in the week, Andy is edgy and takes things out on Chrissie.  He apologises and tells he that he likes her a lot, but she doesn’t really need this messy situation right now.  Could it be over before it began?  As the pair bump into each other throughout the week the sexual tension is clear and they agree to keep their trysts secret for now.

Doug confides in Eric that he’s worried about what the future holds for Laurel if she goes ahead and marries Ashley.  Eric urges him to tell Laurel how he’s feeling, but in the meantime she reads his wedding speech and is upset when she realises he’s just downloaded a generic one from the internet;  she realises he doesn’t want her to marry Ashley.  She confronts him and tells him she doesn’t want him at the wedding.

On her hen do, Laurel is determined to enjoy herself and even tells Harriet to join them when she inadvertently walks in on the party.  Harriet becomes suspicious when Laurel isn’t drinking and guesses that she must be pregnant.  Will she keep that finding to herself?  Meanwhile, the vicar who is to marry the pair, Ben, turns up and the hen party mistake him for a stripper!

Over at Ashley’s game themed Stag do, Bob is touched when Ashley asks him to be his best man and both are enjoying a game of Twister when Doug turns up.  He tells Ashley he knows about the pregnancy and he’s more concerned than ever.  Doug then heads to make amends with Laurel, but will she forgive him the day before the wedding?

It’s the morning of the wedding and a hung-over Nicola and Harriet guiltily panic as vicar Ben appears to be in a much worse state than either of them.  Harriet denies to Kerry that she tried to sabotage the wedding and decides that she’ll have to perform the ceremony herself.  Harriet puts on a brave face as she prepares to marry her ex-boyfriend to his ex-wife.  Will everything go to plan?

The nerves are tripping Aaron as he anxiously paces and worries about seeing Gordon in court.  He sees that ‘liar’ has been scratched on the side of his car and runs back inside, not realising he’s being watched.  Cain thinks it must be Gordon’s work, but has more urgent worries when the police put the garage’s truck near the jewellers that was robbed.

Aaron is pleased to have Robert supporting him at court, but his smile dissolves when he sees how much Gordon is behaving like he is seriously ill for the court’s benefit.  Aaron worries that Gordon’s fake collapse will only help his father’s case.  DS Wise tells Chas that Gordon couldn’t have scratched the car so who has it in for Aaron?

Turns out it could be Liv, Aaron’s half sister who accuses Aaron of being a liar and forces him to finally tell her exactly what Gordon did to him.  When she’s alone, Liv snoops in Chas’ bag and finds Gordon’s address and sets off determined.  Aaron and Chas are horrified when they realise Liv has gone and Zak and Aaron head off to find her as Sandra arrives.

When Liv confronts Gordon, he denies everything and she wavers as he tries to get her on his side.  As Aaron and Zak arrive, Liv comes rushing out and Aaron hopes for the best.

Meanwhile, Chas nags Sandra until she finally admits that she knew Gordon was abusing Aaron.  Chas is sickened by Sandra’s admission and dumbfounded when she refuses to give a statement to the police.  Chas appeals to her as a mother, asking what she’d do if it was Liv that he’d done it to.

Aaron feels like things might finally be going his way as he tells Robert that Sandra has gone to the police.  However, Robert is suspicious when Liv starts asking lots of questions.  Later, Liv meets Gordon, but is it to betray Aaron?

Pearl sets Harriet up with the rather dishy Daniel (the spaniel owner!) and Harriet is pleasantly surprised.

Rhona is worried that her and Paddy won’t ever be able to make things work between them.

Moira tries to hide her disappointment at Noah moving out and into the pub with Charity.

Megan asks Leyla if they can be partners in the wedding business again so that she can provide for herself and Eliza financially, without having to rely on Jai’s money.