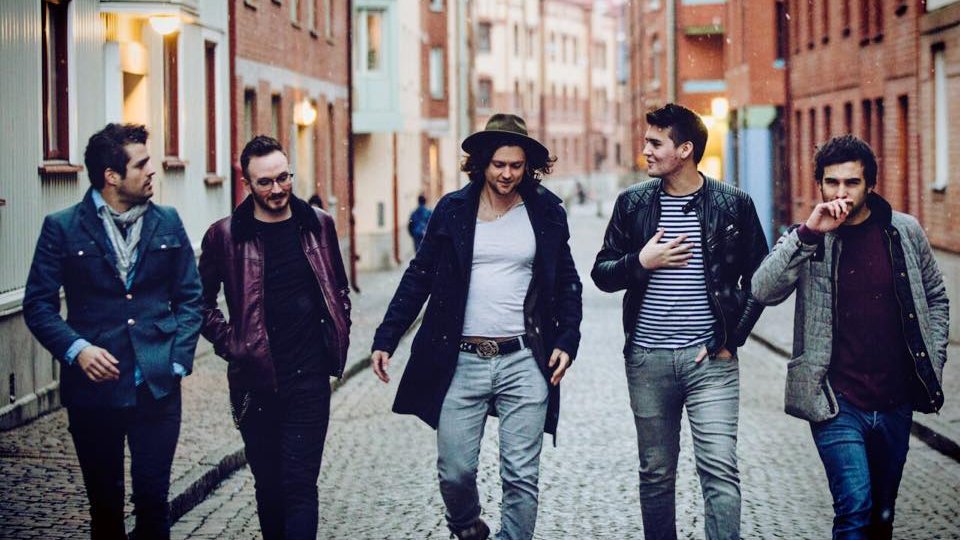 The band wowed the audience performing tracks from their upcoming album and they are really starting to build quite a buzz. This weekend they will be performing at C2C: Country to Country in London, and I highly recommend you check them out if you’re going.

We caught up with lead vocalist Tim to talk about the recent tour with Brett, discuss the band’s music, and find out what they’ll be serving up at C2C.

Hello guys! Where are you today and how are you all?

Hi! We’re doing really well thanks. We are currently at home unpacking 1 case, and repacking another. Heading for C2C in London this evening…

I saw you supporting Brett Eldredge at Koko recently and was really impressed by what I heard. For those readers who aren’t familiar with you yet, tell me how Pauper Kings came to be.

We’re a 4 piece band of brothers/best friends from York, who share a love and passion for American music. We all used to do our own thing which mainly consisted of being a session band for a touring theatre production, but It was 4 years a go when we made the decision to come together with original material, and pursue a career in the music industry as a Country music band from the UK.

It was one of many on the board at a brainstorm meeting in Nashville. Pauper Kings was the name that our mentor Jay DeMarcus from Rascal Flatts liked the best, so he officially named us ‘Pauper Kings’ at his home in Nashville June 2014.

You’ve been busy working on your music over the past couple of years in Nashville. Who have you been working with?

We have been working with top Nashville producer Sean Neff, and our executive producer is Jay DeMarcus from Rascal Flatts. It’s been fantastic to work with him. We were brought up on his music, so to be working/recording, and now mentored by him is a dream.

When can your fans expect new music from you?

It’s been a long process… Like you said, we started this record nearly two years a go, but that’s what I really like about it. You can’t rush music, and we won’t release anything we’re not happy with. With this being our first major record, we don’t want to make any mistakes, as you don’t get a second chance to make a first impression. All that said, we’re hoping to flood the marketplace with some commercial music sometime this year!

Country music is enjoying a bit of a boom in the UK thanks in part to the annual C2C: Country to Country festival. What challenges do you face as a country band in terms of finding crossover success?

The industry is changing all the time, and we honestly believe that there is currently a huge gap in the Country music market for someone like us. What we’ve done as a band, is turn what a lot of people would believe is a hinderance (being from England) to something that people want! Having an English accent on American Country music radio, immediately sets us apart from everything they’ve ever previously heard, and that’s before they hear our music.

You’ll be performing as part of C2C’s Under the Apple Tree sessions. What can fans expect from the show?

A laid back, fun show! Fans will hear old and new songs in a cool intimate setting…

As part of your live set you’ve been performing a cover of Dixie Chicks song Some Days You Gotta Dance, which I hear the band loved! Why did you choose to cover that song?

We love the vibe of this song, always have! It used to be a song that we sung in our dressing room to warm up before a show, but we quickly realised that this should be in our live set. It shows off our harmonies which is something we’re very passionate about, and to have great feedback from the Dixie Chicks themselves was overwhelming!

What was the Brett Eldredge tour like for you? Did he give you any good advice?

Brett and his team were a dream to work with, as they are just like us. They don’t take themselves too seriously, and are just enjoying the ride, which is what we do everyday.

He gave us lots of advice, but the best piece was just to be ourselves, and keep doing exactly what we are, because he believes we bring something special and unique to the Country music market.

Lastly, for someone is yet to hear your music, how would you describe the Pauper Kings sound?

A country pop rock outfit, with harmonious melodies that make you feel like you already know the songs after the first time of listening…

Pauper Kings will perform at C2C: Country to Country, which takes place from Friday 11th to Sunday 13th March 2016. Watch the band’s video for Heart Wide Open below:

In this article:C2C, Pauper Kings