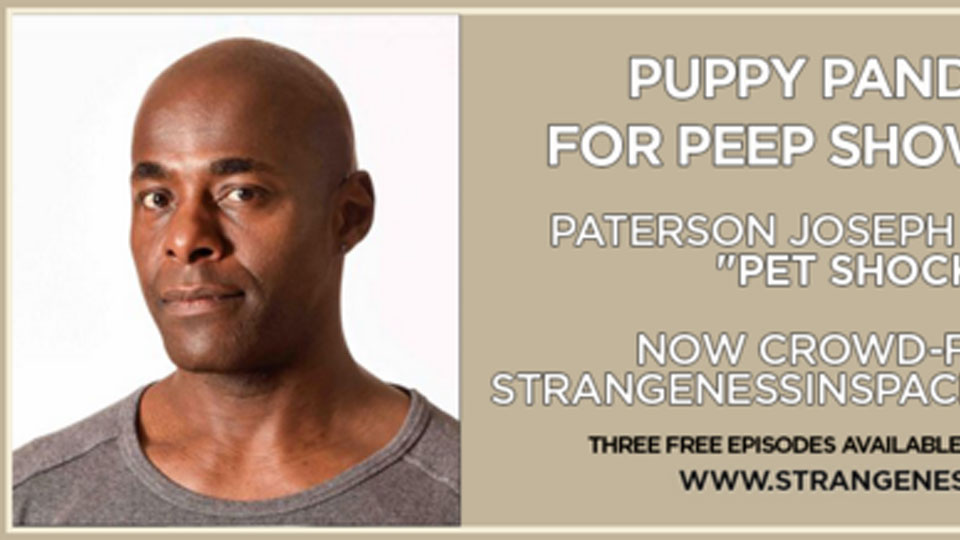 Those talented chaps at Strangeness in Space HQ are dying to make Episode 4 – entitled “Pet Shock Boys” – and now they have the wonderful Paterson Joseph lined up to play ‘The Puppymaster’ and join the other celebrity cast members! Joseph is perhaps best-known for his recurring role as the hard-nosed and slightly crazy boss in Channel Four’s cult classic sitcom Peep Show.

“We thought of Paterson immediately Trev & Simon wrote the role,” said producer Clare Eden. “We all think he’s entirely brilliant as Johnson in Peep Show but in so many other productions too, starting from when we first saw him at the Royal Shakespeare Company. Whether it’s from UK series like Green Wing; HBO’s The Leftovers or alongside Leonardo DeCaprio in Danny Boyle’s The Beach, we know our Mirthling fans will already love his work and be as delighted as we are that he’s coming onboard.”

Paterson Joseph is currently performing in the US with Sancho: An Act of Remembrance, written and performed by himself, and based on the life of Ignatius Sancho who, in 1774, became the first black Briton to vote in a British election.

Strangeness in Space is a completely fan funded production so once enough funds have been raised for Episode 4, you can look forward to hearing Paterson take on the role of a giant French robot, made entirely out of clockwork alien space puppies!

As with previous episodes you can also expect to hear another electro pop classic from Tilbury’s No.1 Synth Pop duo Pink Custard (AKA Trev & Simon); more daft Thorleigh’s product promotion, and more hilarious ramblings from its narrator ‘Bounty Flightingale’ played by Doon Mackichan (Toast of London, Smack the Pony, The Day Today).

Episode 3 has also just been released and introduces Alexei Sayle, the godfather of alternative comedy, as ‘Keith Keys’. Along with very welcome returns from David Annen as ‘Jeremy’, Barnaby Edwards as ‘LE.M.O.N’, and Sarah Madigan as ‘M.A.D.I.’, in another fully 3D ‘watch it with your ears’ soundscape design by Dave Palser.

You can download all three episodes for FREE from the Strangeness in Space website, and if you’d like to help get Episode 4 made check out the funding page for a host of collector’s items, memorabilia and production perks, and some cracking badges!